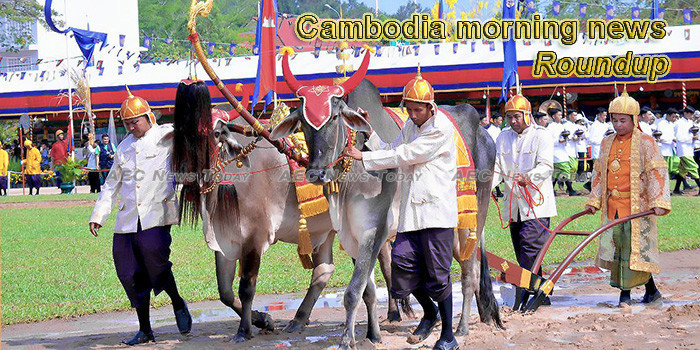 CBC reports $6.7B in consumer credit
The total outstanding balance of consumer credit in Cambodia reached $6.7 billion at the end of March – a 7.4 per cent increase from the end of December – the latest report from the Credit Bureau of Cambodia (CBC) said.
— Phnom Penh Post

Amid Media Clampdown, Rural Cambodians Turn to the Internet
In September 2017, the Cambodian government shut down a number of independent radio news programs across the country, including VOD, Radio Free Asia (RFA) and the Voice of America (VOA), by claiming that they were being broadcast without the proper F.M. licenses.
— VOD

Battambang residents prevented from planting 200 saplings
Authorities in Battambang province have stopped some 150 residents, led by a powerful official, from planting tree saplings in the Samlot Protected Area, amid allegations that the act was merely a pretext to seize protected land for private ownership.
— Phnom Penh Post

Day of Remembrance Used to Extol Hun Sen’s Firm Rule
For Prime Minister Hun Sen, the Khmer Rouge genocide is evidence of progress and security under his rule — a doctrine he repeated again on Monday, the National Day of Remembrance. For some political observers, however, the lesson lies less in the virtues of his firm grip over the country’s politics, and instead in the dangers of unrivaled power.
— VOD

Education certificate forgers to face ministry legal action
The Ministry of Education, Youth and Sport on Monday announced that it is cooperating with relevant authorities to take legal action against those who claimed to be able to produce school and university certificates for a price.
— Phnom Penh Post

Firms urged to study export regulation
Local firms must have a clear understanding of phytosanitary regulation if they wish to increase shipments abroad, experts stressed during a workshop organised by Germany’s GIZ last week.
— Khmer Times

Kampot officials baffled by mystery poles
Kampot provincial Governor Cheav Tay has ordered his officials to probe a Facebook post which shows an image of demarcation poles off the provincial coast in a land sale advertisement.
— Khmer Times

The foundation aiming to preserve the Kingdom’s elephant heritage
From ancient carvings and statues in magnificent temples, to popular folk legends, elephants have long been a part of Cambodia’s culture and traditions.
— Phnom Penh Post

Probe set for Kampot land
A prominent member of the Supreme Council of Consultation is set to launch an investigation into the “dubious” ownership of a private property that allegedly encroaches on the sea in Kampot province.
— Phnom Penh Post

Thousand Gather at Mondulkiri for Biodiversity Day
Over 1,000 government officials, representatives of development agencies, the public and other relevant stakeholders have gathered to cheer the International Day for Biological Diversity 2019 at Mondulkiri province.
— Agence Kampuchea Press

A kick of Kampot pepper
Cambodian cuisine is often overlooked internationally, but there is one unique Cambodian flavor leaving its mark around the world – Kampot pepper.
— CGTN

Kampot Power Cut Wednesday 24 May
According to the notice, Kampot city will have no electricity from 8 am until 12 pm tomorrow.Don’t shoot the messenger if it’s at a different time, longer, or not at all.
— Cambodia News English

Kandal state land reclassified
The government has approved the reclassification of 70-hectares of land along the Mekong river in Kandal province’s Lvea Em district for Khun Sear Import and Export Company to rent.
— Khmer Times

Cambodia Reaffirms Its Foreign Policy of Friendly Relations with Other Countries
The Spokesperson Unit of the Royal Government of Cambodia this evening issued a statement reaffirming the Kingdom’s foreign policy of continuing friendly relations with other countries without discrimination.
— Agence Kampuchea Press

Sign O’ the Chine’s on Otres
On the morning of May 21, 2019, near Otres Beach the local administration co-operated with the Departments of Culture and Fine Arts to dismantle and destroy business signs which did not display the regulation requirements of Khmer text.
— Cambodia News English

A Few Cambodian Fish Species
To celebrate the start of the monsoon, it’s fish season at CNE!
— Cambodia News English

Ministry warning over FB offer to alter high school grades
The Education Ministry is working to identify the user behind a Facebook post offering to alter grades on Grade 12 transcripts in exchange for money.
— Khmer Times

Is democracy in retreat?
A fortnight ago, markets were going great guns, with the S&P500 hitting record high, even as there was increasing evidence that global trade and many economies were slowing.
— Phnom Penh Post

Feature photo Office of the Council of Ministers