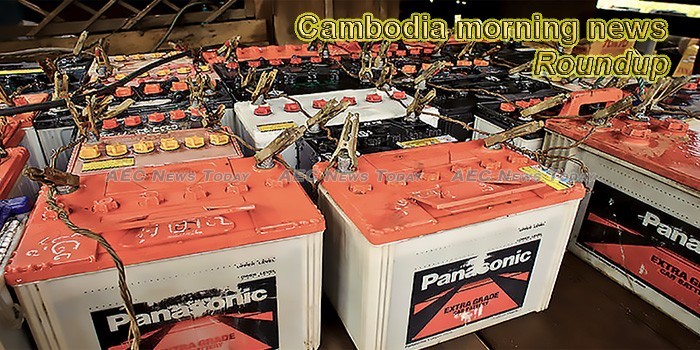 Cambodian Prime Minister Hun Sen Dismisses Concerns of Chinese ‘Control,’ Amid Fear of Growing Debt
Cambodia’s Prime Minister Hun Sen on Friday waved off concerns that China “wants to control” his country, calling the claim a trick by the opposition to turn public opinion against him, even as observers warned that mounting loans and aid will leave Phnom Penh hopelessly indebted to Beijing.
— Radio Free Asia

Daily power cuts
Electric power consumption has recently surpassed expectations. The Ministry of Mines and Energy (MME) has explained that demanding more power than can be supplied has led to a nation-wide power shortage.
— Khmer Times

Banh speaks of ‘regret’ at homecoming
Minister of National Defence Tea Banh used a homecoming ceremony on Thursday marking the return of Cambodian UN peacekeepers to express his “deep regret” at criticisms the Kingdom was straying from the democratic path and failing to fully respect human rights.
— The Phnom Penh Post

US politician lauds progress during meet with Hun Sen
Washington State Senator Doug Ericksen on Friday met with Prime Minister Hun Sen at the Peace Palace, where he lauded last year’s national election as “free, just and non-violent” and a reflection of the will of Cambodian people.
— Khmer Times

Chinese investments are boons not banes
Friday’s ground-breaking ceremony for the four-lane expressway the Chinese are building in Kampong Speu’s Samrong Tong district, which will shorten the driving distance from Phnom Penh to Preah Sihanouk province to 190 kilometres (presently 240 km) and cost $1.9 billion
— Khmer Times

Mondulkiri land decision annulled
Mondulkiri provincial governor Svay Sam Eang has issued an announcement nullifying the provincial administration’s 2015 decision that granted a portion of the Doh Kramom Mountain area to the Ministry of Mines and Energy.
— The Phnom Penh Post

Storms Wreck Property and Kill Across Northern Provinces
On the afternoon of March 23, 2019, there was a storm that tore down 10 houses in Trapeang Sraung commune, Sambor district, Rattanakiri province.
— Cambodia News English

As Thailand Heads to the Polls, Cambodians Watch With Interest
As Thailand heads to the ballot box for the first time since the military took over in a coup five years ago, observers and analysts have said that Cambodia should pay close attention to its neighbors strategic and political development.
— VOA

Japan Should Stop Acting Like China in Cambodia
In a dimly lit ballroom at a Tokyo luxury hotel, Sok Chenda Sophea, the secretary general of the Council for the Development of Cambodia and the minister attached to Prime Minister Hun Sen, persistently asked about 200 Japanese businesspeople to invest in Cambodia.
— Human Right Watch

PM Hun Sen: ‘Poorest leader’ Rainsy caused rifts in CNRP
Prime Minister Hun Sen said on Thursday that “acting president” of the Supreme Court-dissolved Cambodia National Rescue Party (CNRP), Sam Rainsy, is responsible for the divisions in his party by being “the poorest of leaders”, as the opposition figure again reached out to the EU.
— The Phnom Penh Post

Customs department tackles wildlife trade
The General Department of Customs and Excise is strengthening measures to crack down on wildlife smuggling and is focusing on items made from ivory.
— Khmer Times

Cambodia To Build an International Convention Centre in Preah Sihanouk Province
Cambodia is planning to construct an international-standard convention centre in the coastal province of Preah Sihanouk to welcome ASEAN Related Summits in 2022.
— Agence Kampuchea Presse

Workshop educates on legal aid
Having met with relevant institutions, civil society organisations and legal experts on several occasions regarding the new legal aid programme for vulnerable citizens, the Ministry of Justice is continuing to meet stakeholders to ensure a mutual understanding of the development and challenges of the project.
— The Phnom Penh Post

Cambodia on the Way toward Full Potential of Physical Infrastructure
Currently, physical infrastructure situation in Cambodia can be compared to that of some countries in the region, but in 10 to 20 years, if peace and political stability continue to reign in the country as now, this potential sector would be able to catch up with that of some developed countries.
— Agence Kampuchea Presse

Japan funds project to mitigate disaster effects
The Japanese government on Thursday provided a 300 million yen ($2.7 million) grant to commence the Project for the Development of the Base for Disaster Prevention for Improving Living Environment in Cambodia, which aims to minimise the effects of natural disasters.
— The Phnom Penh Post

Explosive farming and foolery
A farmer in Pursat province’s Veal Veng district was seriously injured when he hit an unexploded remnant of the war with his plough and in Ratanakiri province’s Taveng district five persons were injured when they tried to DYI (do-it-yourself) an explosive device.
— Khmer Times

Eyeing more trade with EAEU
The Ministry of Commerce is asking for the cooperation of the private sector to compile a list of products that could sell well in the Eurasian Economic Union.
— Khmer Times

Ministry set to meet the salt community over challenges
The Minister of Industry and Handicraft will hold a meeting with the Kingdom’s salt community in Kep and Kampot provinces next week to discuss the industry’s challenges, ministry spokesman Oum Sotha said.
— The Phnom Penh Post

CATA signs MoU with Indian firm
The Cambodia Association of Travel Agents (CATA) signed a memorandum of understanding with India’s SRAM & MRAM to increase the flow of tourists between the countries.
— Khmer Times

Warrant for Rock drugs officer
Minister of Interior Sar Kheng said on Thursday that an arrest warrant has been issued for a police officer involved in the distribution of nearly 50kg of drugs at the capital’s Rock Entertainment Centre.
— The Phnom Penh Post