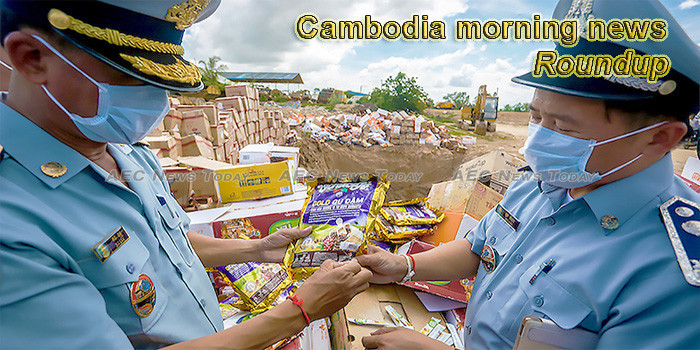 World Bank giving $60 million to help poor farmers
The World Bank will provide about $60 million in continued funding for the third phase of a project by the Agriculture Ministry to improve poor farmers’ livelihoods, a representative said.
— Khmer Times

CDC Endorses some US$60 Investment Projects
Council for the Development of Cambodia has endorsed investments project worth about US$60 million, according the council’s update released yesterday.
— AKP

Record shows ‘slight’ decrease in drug crimes in Cambodia compared to last year
The authorities have conducted 2,425 drug raids across the country this year, detaining 7,294 dealers and users, including 562 women and 167 foreigners, an anti-drugs official said.
— Eleven

Union urges customs officials to apply press law against reporters
The Union of Journalist Federations of Cambodia (UJFC) has called on Prek Chak customs officials in Kampot province to use the Law on the Press to avoid court action against 1 online reporters.
— The Phnom Penh Post

Cambodia Urges Airport Company to Expand Runways for Boeing 777 to Land by 2022
Minister in Charge of Civil Aviation Mao Havannall urged France’s Vinci, a company overseeing airports in Cambodia to finish expanding airport runways in Sihanoukville by 2022 for Boeing 777 to land, speaking in a meeting with Vinci CEO Eric Delobel on Thursday.
— Fresh News

Cambodian Consumers Embracing Digital Payments as a New Way to Pay
Visa, the world’s leader in digital payments, has today released figures that show Cambodians are embracing digital payments with 43 percent year-on-year growth in total value of purchases made using Visa cards and 58 percent growth in the number of transactions.
— AKP

Cambodia, the 8th Biggest Beneficiary of GSP
As it now stands, Cambodia is the eight biggest beneficiary of Generalised System of Preferences (GSP) and the progress in its exports reflects positive move in the textile and garment industry.
— AKP

Cambodia Has 25 Oil Blocks, First Production Starts in 2019: Minister of Energy
Cambodia has 25 oil blocks, six off-shores, minister of Mines and Energy Suy Sem spoke in a workshop on understanding the draft law on the management and production of petroleum, held at the National Assembly on Thursday.
— Fresh News

Why global media does not care about Cambodia’s peacekeepers
Two weeks ago, the UN wrote on its official Facebook page extending gratitude to Cambodia for its active participation and sacrifice for peace in many peacekeeping missions around the world.
— The Phnom Penh Post

Cambodia’s schools are the new frontline in the battle against climate change
Students in Cambodia experience climate change firsthand. For the second time in four years, school hours had to be reduced across the country, due to record heat waves in the dry season.
— World Economic Forum (blog)

TOP NEWS: Do Not Take “Noodle” as Tool for Political Dialogue, PM Hun Sen Warns (Video inside)
Cambodian Prime Minister Hun Sen warned the dissolved opposition that “noodle for national solidary” will not be a tool for political dialogue.
— Fresh News

More Than 74 Percent of Land Registered
The Ministry of Land Management, Urban Planning and Construction has so far issued more than 5.22 million land title certificates for citizens.
— AKP

PM Hun Sen Calls on Rubber Farmers “Patient” with Price Fluctuation (Video inside)
Cambodian Prime Minister Hun Sen called on rubber farmers to be patient with the fluctuation of rubber price on the international market due to trade war, speaking at the Puthisastra graduation ceremony on Thursday.
— Fresh News

Vehicle registration laws issued
The government on Monday issued a sub-decree on the registration for vehicle identification cards and number plates at the request of the Ministry of Public Works and Transport.
— The Phnom Penh Post

Nine New Super Markets and Shopping Malls Expected End of 2019
Nine new mega shopping malls and super markets in Phnom Penh will complete their construction and serve customers by the close of 2019, according to local media report.
— AKP

Apsara Authority allows repair of 35 Angkor homes this month
The Apsara Authority allowed villagers to repair and renovate more than 600 deteriorating homes in the Angkor area in accordance with conservation efforts at the Unesco World Heritage Site, a report seen by The Post on Tuesday said.
— The Phnom Penh Post

Kingdom set to grow local silk operations
Cambodia is considering the opportunity to invest in China’s silk sector. Although China is a major supplier of silk, its production is on the decline, said Royal University of Phnom Penh (RUPP) Board of Directors chairman Mey Kalyan.
— The Phnom Penh Post

Prime Minister presides over University of Puthisastra’s 3rd Graduation Ceremony
The University of Puthisastra (UP) celebrates its 3rd Graduation Ceremony at the Diamond Island Convention and Exhibition Center in Phnom Penh on 6 June 2019 with the Guest of Honor being Samdech Hun Sen, Prime Minister of Cambodia as the.
— Khmer Times

Cambodia Telecoms, Mobile and Broadband Statistics and Analyses 2019 – ResearchAndMarkets.com
Despite its status as a lesser developed country, Cambodia’s efforts to expand and upgrade its telecom infrastructure are bearing fruit.
— Yahoo Finance (media release)

SME cluster law in the works
In a bid to boost the SME sector, the Ministry of Industry and Handicrafts is drafting a law to regulate the construction of industrial parks dedicated to small businesses, an official revealed yesterday.
— Khmer Times