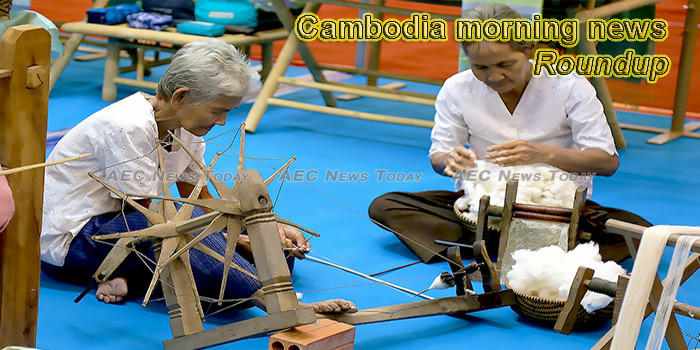 Death toll mounts to 24, including four females
The deadly collapse of the under construction seven story building in Preak Sihanouville continued to climb when rescues pulled out the bodies of another dead workers last night.
— Khmer Times

EU Bank Provides Nearly US$100 Million to Build Water Treatment Plant in Phnom Penh
The European Investment Bank (EIB) has provided a loan of 85.9 million Euros (about US$97.2 million) to the Royal Government of Cambodia for the construction of a water treatment plant in northern Phnom Penh’s Bakheng area.
— AKP

Building Collapse Incident: US$10,000 for Deceased and US$1,250 for Injured
The Royal Government has decided to provide financial assistance for the deceased’s families and the injured of the seven-storey building collapse incident in Preah Sihanoukville, Preah Sihanouk province yesterday morning.
— AKP

Former RFA Reporters in Cambodian Lose Appeal as Lawyer Asks For Prompt Trial
Two former RFA reporters accused of “espionage” lost an appeal on Friday against court supervision, but learned that they will no longer have to show up at their local police station every month, in what their lawyer called a positive development despite the fact that their “freedom is not fully restored yet.”
— RFA

Seized M’kiri timber put up for auction, starting bid firmly set at 1.4B riel
The government’s Auction Committee has announced a public auction of more than 1,500 cubic metres of illegally logged timber at a starting price of some 1.4 billion riel (approximately $353,000).
— The Phnom Penh Post

Gov’t to probe Chinese exports to US via Sihanoukville
The government is investigating allegations that Chinese companies are using Chinese-owned special economic zones in Cambodia to export goods to the US and avoid tariffs, said Ministry of Commerce spokesman Seang Thay.
— The Phnom Penh Post

Cambodia, Singapore to Continue Good Relations
Cambodia and Singapore have considered their recent disagreement as a short nightmare in their relationship and agreed to continue their good ties.
— AKP

Mekong Region Grows More Important to China-US Relations
Amid increasingly tense China-U.S. relations, a U.S. official alluded to China but did not specifically name China regarding “risks” and “challenges” imposed by approaches to dam building and cross-border riverine practices in the Mekong region.
— VOA News

Two injured, thousands of homes damaged
Two people were injured and more than 3,000 houses were damaged by rainstorms across three provinces on Friday, an official said yesterday.
— Khmer Times

Chinese Embassy Expresses Condolence to the Victims of Building Collapses in Sihanoukville
The Chinese Embassy in Cambodia expressed its deepest condolences to the families of the victims of collapsed building and hopes for a speedy recovery of all that are injured in the accident, according to the Embassy’s Facebook post on Sunday.
— Fresh News Asia

Progress Review for Formalisation of Cambodia’s Non-Formal Economy
Cambodia and international labour experts have discussed the evaluation of an endeavour to formalise the Kingdom’s non-formal economy to better the benefit and welfare of workers.
— AKP

Minister of Education instructed to schools to prevent on dengue fever
Education Minister Hang Chuon Naron has issued a new directive which instructs all provincial education departments, private and state education institutes to prevent and protect from dengue fever, the number of cases of death and infected have increased.
— Khmer Times

Chinese Embassy Expresses Condolence to the Victims of Building Collapses in Sihanoukville
The Chinese Embassy in Cambodia expressed its deepest condolences to the families of the victims of collapsed building and hopes for a speedy recovery of all that are injured in the accident, according to the Embassy’s Facebook post on Sunday.
— Fresh News Asia

“Recognition for Prior Learning” Accredited to Tourism Workers in Kratie
Informal knowledge and skill of the province’s workers in tourism has been accredited, as Kratie witnesses the rise of the industry there.
— AKP

Cambodian internet star sets sights on university
Thuch Salik, the young Cambodian street hawker who became an internet star last year when he was filmed selling souvenirs to tourists at Angkor Wat in more than a dozen languages, has found there is much to like about going to school in eastern China.
— Bangkok Post

Cambodian students to compete in MGAC Finals in Malaysia
Three university students were chosen as finalists to compete in the Maybank Go Ahead Challenge in Kuala Lumpur next month.
— Khmer Times

Funcinpec ‘set to sell their headquarters’, says source
An anonymous source from Funcinpec said acting president Prince Norodom Chakravuth had held a meeting with other officials to discuss selling several of the party headquarters across the country while the party president Prince Norodom Ranariddh receives medical treatment at the Royal Phnom Penh Hospital following a tragic traffic accident in June last year that took the life of his wife.
— The Phnom Penh Post

Cambodia Holds Cyclo Race to Preserve Cyclo for Tourism
Some 136 cyclo drivers joined the Cyclo Racing 2019 organised in Phnom Penh this morning with an aim to preserve this traditional mean of transportation for tourism.
— AKP

Living with the dead: Urban poor take over Cambodian cemetery
Graveyards may traditionally be the eternal resting place for the dead, but one cemetery in Phnom Penh has become a place to stay for the living, as communities destroyed by unstoppable development are forced to take desperate measures.
— My Sinchew