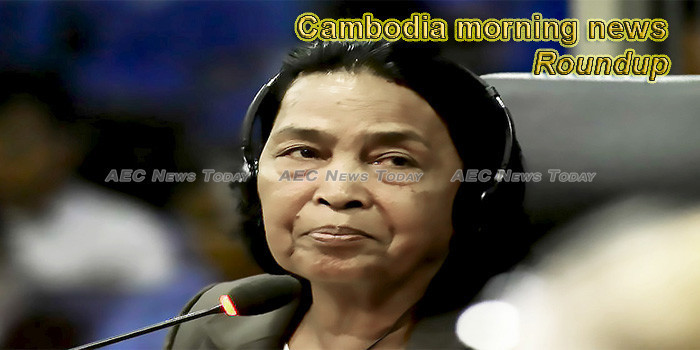 Kingdom’s dengue cases triple this year
Within a span of 20 weeks this year, the death toll from dengue fever has risen to 21, while the number of those who have fallen ill due to the disease has reached over 12,000.
— The Phnom Penh Post

Ministry supports domestic workers
The Women’s Affairs Ministry yesterday highlighted the plight of domestic workers, noting that they are vulnerable and are in need of social protection services.
— Khmer Times

City Hall calls on public for proper waste disposal
City Hall has instructed the public, including business owners, to dispose of garbage in a timely manner in accordance with the schedule set by authorities, as well as to pack dangerous waste in a red bag to aid garbage collectors.
— Khmer Times

Freeing Cambodia’s children
Cambodia may receive a lot of criticism aimed especially at its politics and human rights, but the Kingdom is apparently doing something right.
— The ASEAN Post

Siemens to expand investment
Siemens on Friday pledged to expand its investment in Cambodia as a result of the country’s impressive economic growth.
— Khmer Times

Kingdom and China sign MoU on trans-border diseases
The Health Ministry on Saturday signed a memorandum of understanding with China’s General Administration of Customs to prevent the trans-border spread of communicable diseases.
— Khmer Times

Clinics and Hospitals Must be Handy to Prevent Possible Outbreak of Dengue Fever
Ministry of Health has ordered all health clinics and hospitals across Cambodia to be handy and ensure proper monitoring to prevent possible dengue fever outbreak.
— AKP

Potential US ambassador would champion rights if appointed
The US’ deputy assistant secretary for southeast Asia Patrick Murphy would promote democracy and human rights as his main agenda if he is appointed as the new ambassador to Cambodia, said a former opposition party official.
— Khmer Times

CNRP: Rainsy to return in months
Mu Sochua, the vice-president of the Supreme Court-dissolved Cambodia National Rescue Party (CNRP), said on Saturday that “acting president” Sam Rainsy and the party’s self-exiled leadership would return to the Kingdom in August or September.
— The Phnom Penh Post

Assembly approves Sok Pheng for Prey Veng seat
National Assembly president Heng Samrin announced on Monday that Sok Pheng would take up the vacant seat in Prey Veng province after the incumbent Pov Samy passed away in 2015 at the age of 73.
— AKP

General summoned for questioning over threats to torch four excavators
The Takeo Provincial Court has issued a summons ordering a Brigadier General from the National Police to appear for questioning on Wednesday for threatening to damage properties belonging to a private company.
— The Phnom Penh Post

Meth smuggler still at large after Svay Rieng bust
Svay Rieng provincial anti-drugs police are working with their Vietnamese counterparts to find those behind the attempted trafficking of a large consignment of methamphetamine after a spooked smuggler dumped a suitcase containing more than 16kg of the drug near the Bavet border checkpoint.
— The Phnom Penh Post

Court questions nine after drugs raid in Banteay Meanchey
The Banteay Meanchey provincial court prosecutor is questioning nine suspects who were arrested in a raid on a major nightclub in Poipet on Thursday night.
— The Phnom Penh Post