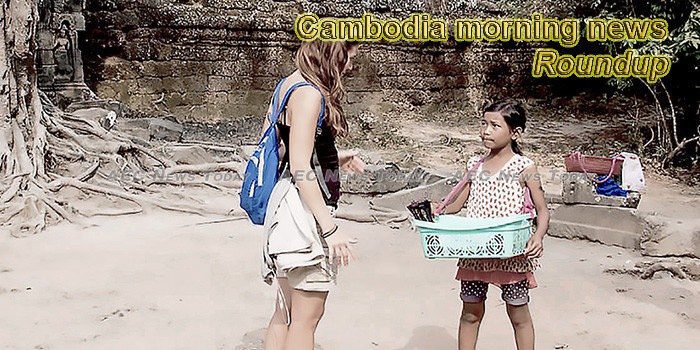 EU, US pressing towards Cambodia trade reprisals
A United States Trade Representative (USTR) and Department of State delegation wrapped up a five-day mission to Cambodia on June 7, a visit that could ultimately have major ramifications for the Southeast Asian nation’s economy.
— Asia Times

Over US$500 Million Investment Projects Approved
The Council for the Development of Cambodia has licensed four investment projects worth US$532.8 million, according to the body’s recent notification.
— AKP

EU demands must not cross ‘red line’: gov’t
A high-ranking government official reiterated on Thursday that EU demands regarding Cambodia keeping its access to the bloc’s “Everything But Arms” (EBA) agreement must not cross the “red line” of sovereignty and independence.
— The Phnom Penh Post

NEC Announces Official Results of 3rd-mandate Council Election
The official results of the 3rd Election of Capital, Provincial, Municipal, District and Khan Councils, held across the country in late May, was announced this morning by the National Election Committee (NEC).
— AKP

PPCBank and IFC team up to help SMEs
South Korea-based PPCBank on Friday entered into an agreement with the International Finance Corporation (IFC) to foster the growth of small businesses in Cambodia.
— Khmer Times

GMAC’s confidence on EBA may be premature
Last week, the Garment Manufacturer’s Association of Cambodia (GMAC), said that a full withdrawal of the Kingdom’s everything-but arms trade status is unlikely.
— Khmer Times

Cambodian rivals use noodle ploy to get message across
The bitter decades-long rivalry between Hun Sen, Cambodia’s strongman leader, and Sam Rainsy, his self-exiled chief political rival and critic, has sometimes played out in deadly violence. But on Sunday, soup rather than blood was likely to be spilled.
— Bangkok Post

Cambodian Government to File Lawsuit to French Court against Sam Rainsy over Hok Lundy’s Death
Prime Minister Hun Sen and interior minister Sar Kheng are preparing lawsuits against Sam Rainsy to the French court over the accusations that the premier was a man behind the death of former police chief Hok Lundy, according to the government spokeman Phay Siphan on Friday, June 7.
— Fresh News

CRF awaits response from EU
The European Court of Justice has yet to make a pronouncement regarding a lawsuit filed by the Cambodia Rice Federation in April against the European Union’s decision to impose tariffs on Cambodian Indica rice.
— Khmer Times

Kingsmen CMTI banks on overseas results
THAILAND-BASED Kingsmen CMTI Plc is stepping up its services in Myanmar and Cambodia, amid business expansion by both Thai and foreign investors in the two countries, said Sunisa Ratnanenya, the company’s deputy managing director/exhibitions and museum, alternative marketing architecture and engineering.
— The Nation

Expansion of Sihanoukville Airport to Complete in 2022
The expansion of runway in Sihanoukville International Airport has been scheduled to complete before the end of 2022 in order to handle the long haul aircrafts of world leaders who will attend the ASEAN Summit hosted by Preah Sihanouk province.
— AKP

Mine dog heroes honoured
On Friday, the Cambodian Mine Action Centre (CMAC) will celebrate the heroism of mine detection dogs that help speed up the painstaking task and ease the difficulties faced by demining agents.
— Eleven

11 killed in vehicles’ smash up in Cambodia
At least 11 people were killed and four others injured in a car crash in Southwestern Cambodia’s Kampong Speu province on Saturday evening, a senior police official said.
— The Manila Times

Apsara Authority plans tree planting campaign
In a bid to restore the environment in the Angkor Archaeological Park, the Apsara Authority is planning a campaign to have 40,000 new saplings planted.
— Khmer Times

Cambodia To Host World Cycling Race in 2020
A world cycling race will be organised in early 2020 at the Cambodian beach, according to the Cambodian Ministry of Tourism.
— AKP

Youths call for stronger commitment on environmental protection
Environmental organisations and associations have called on the government to increase the budget for activities related to the protection of natural resources and the environment, as well as strengthening law enforcement, as young people express concern over climate change.
— Khmer Times

Cambodia natives found their happy place in Ashland
They grew up just miles apart but had to travel nearly 9,000 miles to meet. Now, they’re in business together.
— The Daily Independent