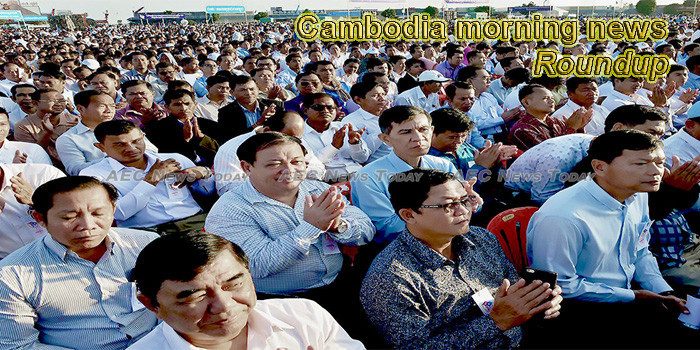 Forty Years On, Khmer Rouge Fall Still Dominates Cambodian Politics
Despite the majority of people in the area being former Khmer Rouge, there are some newcomers who came to do business in Anlong Veng, including restaurants, grocery stores, and entertainment venues.
— VOA Cambodia

Conservationist set to receive $20k per year
An American activist receives a $20,000 check for his conservation efforts.
— Khmer Times

Reconciliation remains elusive as Cambodia marks 40 years since fall of the Khmer Rouge
When you discuss the Khmer Rouge in Cambodia, you will often hear people recite a very specific period of time: three years, eight months and 20 days.
— Cambodia Daily

Number of casino licenses reach 150 in Cambodia
Cambodia casino industry has passed a milestone as the country has issued its 150th casino license.
— European Gaming

Korean Uni Helps in Kampong Thom
Students and teachers of a Republic of Korea university, have visited Cambodia to share experiences and explore the culture and the way of life of Cambodians.
— Cambodia News English

Build basins for wastewater, businesses told
The National Committee for the Management and Development of Coastal Zones and the Preah Sihanouk Provincial Hall have instructed all hotels, guesthouses and other business outlets to install wastewater treatment basins to prevent wastewater from directly flowing into the sea
— Khmer Times

Airfreight expanded markedly in 2018: SSCA
The volume of cargo transported by air in the Kingdom increased by 80,000 tonnes last year, a hike of between 20 to 25 percent year-on-year, according to an official from the State Secretariat of Civil Aviation (SSCA).
— Khmer Times

Pigeon and Balloon Releasing Ceremony
Pigeon and balloon releasing at the closing ceremony of the Commemoration of the 40th Anniversary of January 7 Victory Day over the Khmer Rouge Genocidal Regime (1979- 2019) at the National Olympic Stadium in Phnom Penh this morning.
— Agence Kampuchea Press

KNUP eager to merge with Funcinpec
The Khmer National United Party has addressed concerns about the amount of time Funcinpec is taking to join forces in order to be a legitimate contender in future elections.
— Khmer Times

Mass Parade of 25 Provinces-Municipality and UYFC
A mass parade of 25 provinces and municipality and the Union of Youth Federations of Cambodia (UYFC) during the Commemoration of the 40th Anniversary of January 7 Victory Day over the Khmer Rouge Genocidal Regime (1979-2019) at the National Olympic Stadium in Phnom Penh this morning.
— Agence Kampuchea Press