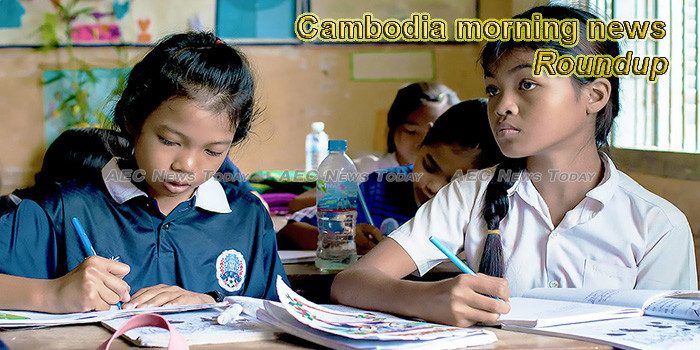 Six Arrested, One Critically Injured After Police Fire on Land Protest in Cambodia’s Sihanoukville Province
Six villagers were arrested and one was left critically injured Thursday after authorities fired on a protest against the forcible eviction of residents from land in southwest Cambodia’s Sihanoukville province, in the country’s first violent police crackdown since a July election widely seen as unfree and unfair.
— Radio Free Asia

Hun Sen calls on military to ‘destroy’ opponents
Cambodia’s strongman premier Hun Sen on Thursday, January 24, called on his country’s military to “destroy” opponents if the government comes under threat, in a tirade in which he described himself as the “the one who steers the wheel” of the army.
— Rappler

Wildlife / How can Cambodia take on the mammoth task of fighting its illegal ivory trade?
In the first days of 2019, researchers at the Royal Zoological Society Scotland (RZSS) made a startling discovery: an ivory trinket taken from a market in the Cambodian capital of Phnom Penh was made from the tusk of an animal that has been extinct for more than 10,000 years.
— Southeast Asia Globe

All Cambodian Villages To Have Electricity Access by 2020
All Cambodian villages with access to electricity by 2020 is the commitment of the Ministry of Mines and Energy.
— Agence Kampuchea Presse

CRF to protest EU tariffs
The Cambodia Rice Federation (CRF) said the European Commission’s decision to re-impose tariffs on Cambodian rice was made too hastily, leaving local farmers and exporters unprepared and unable to remain competitive in the European market.
— Khmer Times

Despite lower exports, trade with Thailand up 35 percent
Trade between Cambodia and neighbouring Thailand expanded by more than 35 percent last year driven by strong economic growth in both nations.
— Khmer Times

In Poor Cambodian Town, Labor Migration to South Korea Provides Income for Many
In 2015, Vin Dyna, then 21 years old, was struggling with the combined study load of his high school curriculum and the private Korean language classes he was following.
— VOA

What if no war and genocide in Cambodia?
The genocidal Khmer Rouge plunged Cambodia into the dark ages that it lost out on the course of development that was sweeping across the region during that period.
— Khmer Times

CLC calls for release of activist
The Cambodian Labour Confederation (CLC) has asked the Preah Sihanouk provincial authority to unconditionally release its volunteer and a land activist after they were detained over a land grab allegation at the Kbal Chhay protected area.
— The Phnom Penh Post

Cambodia’s largest waterfall flowing between two nations
Sitting slap bang on the Cambodian-Lao frontier, the upper Mekong waterfall is a spectacle to behold, as its turquoise-blue stream cascades over a gauntlet of limestone rocks, frothing and churning as it races downstream.
— The Phnom Penh Post

Royal Cambodian Army to host parade with troops and weapons
Today is the 20th anniversary of the establishment of the Royal Cambodian Army and a parade of tanks, heavy weapons and thousands of soldiers is expected to be held at its headquarters in Phnom Penh’s Por Senchey district.
— Khmer Times

PP to crackdown on street violations
The Phnom Penh Municipal Hall on Tuesday gave one month’s notice for businesses to stop street and public sidewalk violations or they will face closure, suspension and legal action.
— The Phnom Penh Post

Culture Minister urges youth to visit Kingdom’s museums
Culture and Fine Arts Minister Phoeung Sakona is appealing to young Cambodians to visit museums in the Kingdom to understand its culture and history after discovering that the majority of museum-goers last year were foreigners.
— Khmer Times

Gov’t to follow court’s wishes should Rainsy make a return
A government statement on Tuesday said legal action would be taken against former opposition leader Sam Rainsy should the Supreme Court request it, if he were to return to Cambodia.
— The Phnom Penh Post

Cambodia Airports’ Clarification on New System at Airport
Mr. Eric Delobel, Chief Executive Officer of Cambodia Airports, the developer and operators of the three international airports in Cambodia, has sent a letter to Minister of Information H.E. Khieu Kanharith in reply to the latter’s recent Facebook post about his upsetting experience about the new system implemented at Phnom Penh International Airport.
— Agence Kampuchea Presse

Makro to open Siem Reap supermarket
After a successful outlet in the capital, cash and carry brand Makro will inaugurate a new supermarket in Siem Reap tomorrow.
— Khmer Times

A villager killed by landmine in Battambang
A villager in Battambang province’s Ratanak Mondol district was killed after stepping on a landmine on Wednesday.
— Khmer Times

Foreign Exchange Rates in Cambodia
The following are the foreign exchange rates against the Riel (Cambodian Currency) released by the National Bank on, January 24.
— Agence Kampuchea Presse

Former governor denies murder as trial begins
On the first day of his murder trial on Wednesday, the former governor of Takeo province Lay Vannak denied killing his mistress and claimed she had committed suicide.
— The Phnom Penh Post

The Dreams of Miss Cambodia
In an interview with Taing Rinith, 23-year-old Rern Nat, the winner of Miss Cambodia 2017 and the second Cambodian woman to compete in Miss Universe, speaks about her dream of helping the next-generation of Cambodians through a tuition-free English school, which she believes will give Cambodian youth something she wished she had.
— Khmer Times

Court charges two over land protest
A union worker and a resident detained by Preah Sihanouk provincial authorities on Monday during a protest over land demarcation were charged yesterday over land encroachment and obstruction.
— Khmer Times