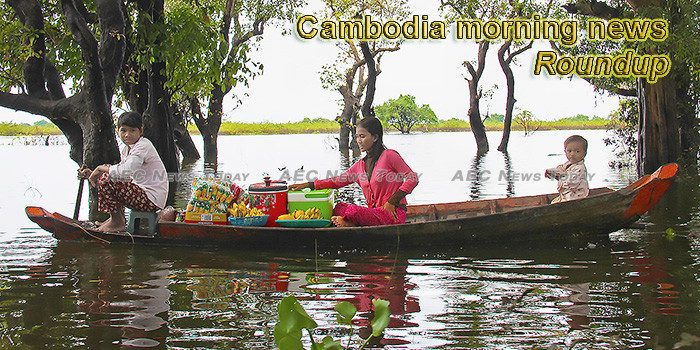 Economy grew 7.3 pct in 2018: Ministry
On the back of strong growth in the garment, construction and hospitality sectors, the national economy expanded by 7.3 percent last year, according to the Ministry of Economy and Finance.
— Khmer Times

Condo supply up 19 percent in Q4 2018: CBRE
The condo supply in Phnom Penh increased by nearly 19 percent in the last quarter of 2018, with 2,234 new units joining the market, according to CBRE’s latest report.
— Khmer Times

Cambodia’s ‘quiet king’ must find his political voice
The recent abdication of Malaysia’s Sultan Muhammad V after his controversial marriage to a 25-year-old Russian beauty queen has raised questions about the moral authority and responsibilities of Cambodia’s King Norodom Sihamoni.
— Asia Times

EU on the verge of imposing tariffs on Burmese, Cambodian rice
THE European Union plans to impose tariffs on rice coming from Cambodia and Burma for the next three years in a decision that could deal a huge blow to the agriculturally-dependent Southeast Asian economies.
— Asian Correspondence

Hun Sen takes on the EU
Cambodian Prime Minister Hun Sen’s battle with the European Union (EU) intensified this week after he threatened to act out against the country’s opposition should the EU follow through with its proposed withdrawal of trade benefits.
— The Asean Post

Say No to Plastic / Striving for better health and environment in Cambodia… and Southeast Asia
Since early 2015, Plastic Free Cambodia (PFC) has been the public voice for plastic free awareness in the region.
— The Cambodia Daily

Japanese volunteer’s initiative allows Cambodians to see future beyond dumps where they scavenged
In Anlong Pi, a village on the outskirts of famous tourist destination Siem Reap in northwestern Cambodia, a group of women gather each day to peel bark from 3-meter-long sections of banana tree trunks.
— The Japan Times

You’d better watch out, you’d better not cry…
Even before Thaksin Shinawatra entered politics, his family was involved in dubious, if not totally illegal, business documentation.
— The Nation (very annoying pop-ups)

Hospital in Phnom Penh closed after confinement claims | #AsiaNewsNetwork
Cambodia’s Ministry of Health on Monday ordered the immediate closure of the capital’s Victoria International Hospital for allegedly holding a patient and her family against their will for failing to pay a $2,000 medical bill.
— Eleven/ Asia News Network

Unionist memorial to proceed
Phnom Penh Municipal Hall spokesman Met Meas Pheakdey told The Post on Monday that it will likely allow a ceremony marking the 15th anniversary of the murder of union leader Chea Vichea, adding that the decision is subject to Governor Khung Sreng’s approval.
— Phnom Penh Post

Japanese volunteer’s initiative allows Cambodians to see future beyond dumps where they scavenged
In Anlong Pi, a village on the outskirts of famous tourist destination Siem Reap in northwestern Cambodia, a group of women gather each day to peel bark from 3-meter-long sections of banana tree trunks.
— www.japantimes.co.jp

Guests Pay- The Financial Burden of Weddings
During the wedding season, which traditionally runs from November to April, the sound of singing is heard almost everywhere across the whole country. Khmer weddings show peace and happiness for families according to their traditional customs.
— Cambodia News English

Preah Sihanouk authorities to go ahead with demolition plan
The Preah Sihanouk provincial authority will continue with plans to bulldoze some 20 homes in Sihanoukville, after authorities failed to find a solution to an ongoing land dispute with villagers during a visit on Monday.
— Phnom Penh Post

State Television Undergoing Digitalisation
Ministry of Information is on the verge of shifting its television’s transmission signals from analogue to digital.
— Agence Kampuchea Press

Free rides to continue on water taxis
The water taxi system, a network of boats inaugurated in April to connect destinations along the Tonle Sap and Tonle Bassac rivers, was used by more than 30,000 passengers in 2018, according to the Ministry of Public Works and Transport.
— Khmer Times

Man detained over Victoria hospital fiasco
A Chinese man has been arrested by police over his suspected involvement in the detainment of a patient whose family was unable to pay her medical bills in Tuol Kork district’s Victoria hospital on Sunday.
— Khmer Times

Professionals network to strengthen tourism human resources
To foment the training of more and better professionals in the tourism industry, the government has launched an initiative that will bring together industry experts to work alongside public officials.
— Khmer Times

Angkor Enterprise sees new website launched
THE Angkor Enterprise, a state-run institution that manages tickets sales for international visitors to the Angkor Archaeological Park, has launched a new website that will show real-time figures of tickets sold and other information relevant to tourism.
— Phnom Penh Post

School-Children in Cambodia Pave Way for Climate Adaptation
As part of a project to help people adapt to climate change, UN Environment and the Cambodian government have established school vegetable gardens, along with a water-pump for irrigation and some training for growing vegetables.
— Cambodia News English