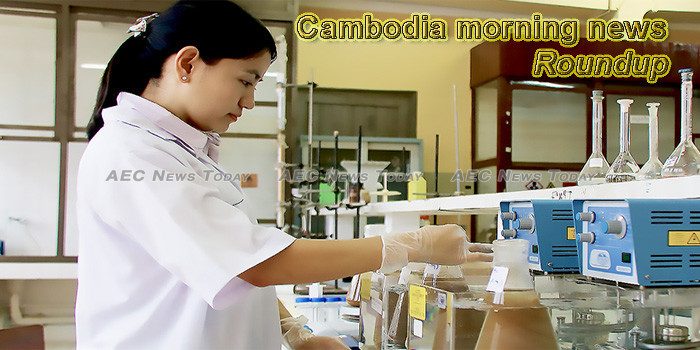 Cambodian Economists See Positive Growth amid EU’s Threat to Withdraw EBA (Video inside)
Both government officials and economic analysts all agreed that the European Commission will sooner or later eliminate Everything But Arms (EBA) trade scheme from Cambodia after she graduated from the LDCs; however, that does not stop Cambodia from growing.
— Fresh News

Goal! UEFA Champions League live on Twitter for (some) Asean fans
Football fans in four Asean member countries will be able to catch all of the action of the UEFA Champions League Round 16 direct on their smartphones or computers as the result of a deal between Goal media, Twitter, and the UEFA League.
— AEC News Today

Former Opposition Leader Warns Chinese Immigrants Not to ‘Provoke Backlash’
The former head of Cambodia’s main opposition party, Sam Rainsy, has warned Chinese nationals and investors in Cambodia to be sensitive to Cambodian culture and the political situation in the country.
— VOA Cambodia

Malaysian delegates visit 47 Poipet detainees
After 65 days of being held in the Banteay Meanchey provincial prison, some of the 47 detainees finally got to meet their loved ones who flew all the way from Malaysia today.
— Khmer Times

Cambodia Post Made US$13 Million in 2018
Cambodia Post, the agency responsible for providing postal services in the Kingdom, generated US$13 million as national income in 2018.
— Agence Kampuchea Presse

EBA withdrawal provides ‘opportunity for growth’
Economic analyst Khoun Bunny said on Tuesday that the loss of the EU’s preferential Everything But Arms (EBA) agreement could be a golden opportunity for Cambodia to show it deserved to be ranked sixth on the list of the world’s fastest-growing economies.
— The Phnom Penh Post

Government rebukes EU over EBA review
The government yesterday chastised the European Commission’s move to initiate a six-month “intensive monitoring” period of the country over perceived democratic and human rights setbacks, labelling the move “an extreme injustice” and “tantamount to acts of interference”.
— Khmer Times

Cambodia Produced 220,100 Tons of Rubber in 2018
Cambodia produced in total 220,100 tons of rubber last year and most of the product was exported, according to a report from the Ministry of Agriculture, Forestry and Fisheries.
— Agence Kampuchea Presse

Opinion: Convicted Sam Rainsy Wouldn’t Be Shy Of Harming Cambodian People’s Interest in An Hopeless Attempt to Ruin His Own Nation
Following the Coup in the former Cambodia’s National Rescue Party to overthrow Kem Sokha from the party’s leadership, Sam Rainsy – who were convicted in numerous legal cases – has been attempting to stir Cambodia’s political situation by appealing to the foreign donors to cut off their assistances, the investors to cease their investments and the purchasers to stop ordering goods from Cambodia.
— Fresh News

Trash Nets in SHK
Local authorities have begun to trap trash floating in the various canals and drainage points in an effort to stop waste flowing out into the sea and washing up on the beaches.
— Cambodia News English

More Cambodians travel for leisure
Cambodians are increasingly travelling overseas for leisure, as the number of the Kingdom’s outbound tourists reached nearly two million last year, a trend that a tourism insider said was due to a change in spending habits of Cambodia’s middle-class.
— The Phnom Penh Post

China Opens Trade Centre in Phnom Penh
Yunnan province of the People’s Republic of China has opened a trade centre in Phnom Penh to promote and disseminate updates of trade, tourism and culture between the two countries.
— Agence Kampuchea Presse

Situation along borders calm, ministry says
The situation along the borders with neighbouring countries is calm, although there are still some issues to be resolved, the Interior Ministry said today.
— Khmer Times

Rice exports down 5%
Rice exports last month were five per cent lower than in January last year, after a full year of decline in 2018. However, a sector insider said it is not a major concern because it is only the beginning of 2019.
— The Phnom Penh Post

Stand up and Forward with Hope: PM Hun Sen
Cambodian Prime Minister Hun Sen reassured that Cambodia will not return to poverty like in the past.
— Fresh News

Ethnic group ‘disappointed’ to be denied French visas to attend court
Eleven people at the centre of a case involving seven indigenous Bunong villages in Mondulkiri province pursuing legal action in France have expressed disappointment after the French embassy in Phnom Penh denied their visa applications to attend court.
— The Phnom Penh Post

Government reshuffles coastal managemet committee members
The government reshuffled members of the National Committee for Coastal Management and Development in late January, according to a government statement received by The Post on Tuesday.
— The Phnom Penh Post

Authorities strengthen campaign against illegal drug use, trafficking
A senior national anti-drug official on Tuesday called on authorities, educators, students and all citizens to help prevent drug use and trafficking.
— The Phnom Penh Post

Army accused of clearing land
Membes of Battambang province’s forest community and relevant authorities on Tuesday claimed that over 100ha of forest land in Samlot Protected Area have been illegally cleared by wealthy citizens and armed forces in order to place it under their ownership.
— The Phnom Penh Post

Gov’t To Increase Budget Allocation to Sub-national Administrations
The Royal Government of Cambodia is planning to increase the budget allocation up to US$110,000 by 2023 to sub-national administrations.
— Agence Kampuchea Presse

Rangers, activists join forces to stop logging
Prey Preah Roka Wildlife Sanctuary environmental rangers collaborated in patrols with forestry activists in a crackdown on illegal logging, apprehending two suspects, sending one to Preah Vihear Provincial Court, according to an official close to the matter on Tuesday.
— The Phnom Penh Post

Japan donates $500K for B’bang education
In an agreement signed at the Embassy of Japan in Phnom Penh on Tuesday, Shanti Volunteer Association (SVA) received a $529,068 grant from from the Japanese government to carry out its projects aimed at improving early childhood education in Battambang.
— The Phnom Penh Post

Cambodia morning news for May 9