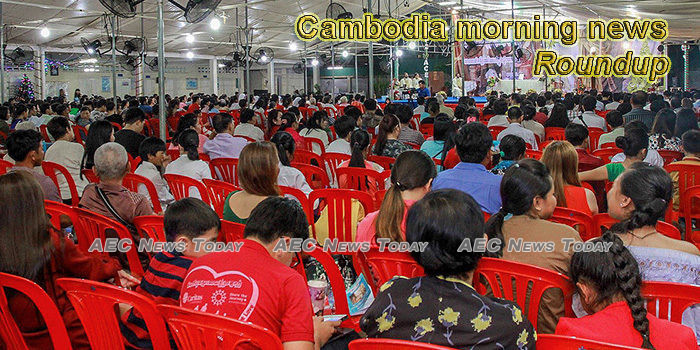 A Jungle Airstrip Stirs Suspicions About China’s Plans for Cambodia
The Chinese military’s “string of pearls” strategy depends on far-flung regional outposts. Some think Cambodia is becoming one.
— The New York Times (paywall)

EBA deal withdrawal wouldn’t affect operations, say EuroCham members
The European Chamber of Commerce (EuroCham) members in the recent EuroCham Business Confidence Survey 2019 do not expect a withdrawal of the Everything-but-arms (EBA) scheme to have an impact on their operations.
— Khmer Times

Hun Sen orders end to illegal Koh Kong land reclamation
“In Koh Kong, there are some wrongdoers filling the sea without approval and they are protected by military officials,” he told a meeting in Kampot on Saturday.
— Thmey Thmey

Cambodia’s air passenger traffic grows in Phnom Penh, Sihanoukville
Passenger traffic at Cambodian airports grew by 12% in the first 11 months of this year because of new air routes and new airlines being put into operation.
— Bangkok Post

Sar Kheng urges migrant workers to report brokers
Interior Minister Sar Kheng has reiterated his call for all citizens to be more attentive and avoid falling into misleading advertisement of brokers who take advantage of migrant workers.
— Khmer Times

CDC approves three projects worth $11M
Three investment projects worth more than $11 million were approved by the Council for the Development of Cambodia (CDC) this week, a CDC press release said on Wednesday.
— The Phnom Penh Post

ECCC urged to dismiss An’s case
Defense lawyers for Ao An have called for Case 004/02 to be dismissed after the Pre-Trial Chamber of the Extraordinary Chambers in the Courts of Cambodia (ECCC) could not reach an affirmative vote on bringing their client to trial for genocide.
— The Phnom Penh Post

The ultimate guide to banking for foreigners in Cambodia
It’s a well-known fact that Cambodia offers affordable living standards complemented by the trademark Asian hospitality. That’s why it’s no surprise that the Kingdom of Cambodia has been a choice destination for expatriates over the past decade.
— Khmer Times

Cambodia tries to boost mango sales abroad
Mangoes could be one of the main agricultural products from Cambodia to be exported to foreign markets, providing high hopes for their current untapped farming potential, the government says, adding the sector is ready for new investment.
— Khmer Times

Hun Manet warns against complacency in recruitment exam
Hun Manet, the Deputy Commander-in-Chief of the Royal Cambodian Armed Forces (RCAF) and commander of the army’s infantry, on Sunday warned candidates from being too complacent in the recruitment examination, which will see the participation of 8,000 potential soldiers.
— The Phnom Penh Post

Natural, cultural resources an advantage for tourism sector
With the number of international tourists expected to visit Cambodia forecast to grow to 7.5 million people by 2030, Minister of Tourism Thong Khon said the Kingdom’s rich diversity of natural and cultural resources along the coast and on its islands remain its competitive advantage in developing the tourism sector.
— The Phnom Penh Post

Experts to visit relic site
Experts from the Ministry of Culture and Fine Arts are planning a visit to Kuk mountain in Pursat province, where an ancient Buddhist carving was found last week.
— Khmer Times

Sar Kheng: ‘Dissent normal, opposing views not enemy’
Minister of Interior Sar Kheng said dissenting voices are a normal part of politics, and that Cambodia could not stray from the path of multi-party liberal democracy as the power to lead the Kingdom was born from elections.
— The Phnom Penh Post

Cambodia is committed to advance LMI agenda
Foreign Affairs Minister Prak Sokhonn has reiterated Cambodia’s commitment to advance the Lower Mekong Initiative (LMI) agenda to greater heights and expressed optimism towards the collaborative work yet to come in the near future.
— Khmer Times

Minister calls for Mekong collaboration
Minister of Public Works and Transport Sun Chanthol on Wednesday called for further collaboration in the Greater Mekong Subregion (GMS) for more attractive investment, trade and tourism in the region.
— The Phnom Penh Post

Visitors to the coast up significantly
The Ministry of Tourism projects that at least 1.3 million foreign nationals and 3.4 million domestic tourists will visit the Cambodian coast in 2019.
— Khmer Times

Members of 12 CAPs receive full legal rights to protect natural resources
An agreement to guard natural resources in the Eastern Plain Landscape was signed Thursday by a dozen protected communities in Mondulkiri province, according to the World Wide Fund for Nature in Cambodia.
— Khmer Times

CHRC highlights outcome of mission in Russia
The Cambodian Human Rights Committee (CHRC) today issued a statement highlighting the outcome of the three-day visit in Russia where a memorandum of understanding on the cooperation in the field of human rights between the two countries was inked.
— Khmer Times

Cambodia celebrates Sea Festival in southwestern Kampot province
Speaking at the opening ceremony live broadcast on the National Television of Cambodia (TVK), Prime Minister Hun Sen said with beautiful coastline and numerous cultural heritage sites, Cambodia has become one of the most popular tourism destinations in the region.
— Thmey Thmey

Phnom Penh to Host Digital Cambodia 2020 in March
Phnom Penh will host a huge digital forum to boost digital technology in March next year at Koh Pich Convention and Exhibition Centre – the heart of the capital.
— AKP

Ministry grants M’kiri communities right to manage natural resources
Twelve of 19 representatives from protected areas in the Phnom Prich, Srepok and Keo Seima wildlife sanctuaries in Mondulkiri province – consisting of nearly 13,000 people – signed an agreement with the Ministry of Environment on the sustainable management of natural resources.
— The Phnom Penh Post

Daikin provides best cooling solution in Kingdom’s prospering market
Daikin was founded in 1924, after 95 years of establishment, Daikin products are now sold in more than 150 countries. There are 76,000 employees working across 100 production bases worldwide and 291 consolidated subsidiaries.
— Khmer Times