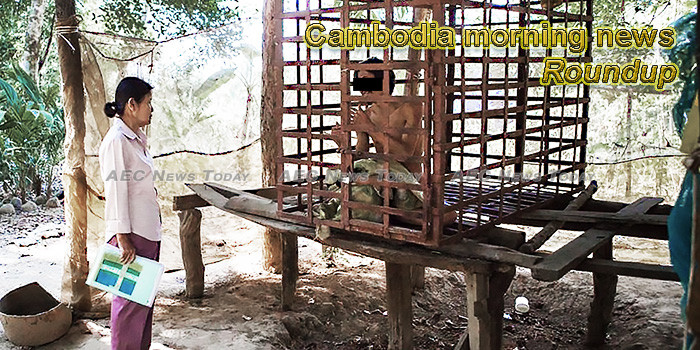 EU mulls end to Cambodia deal
For almost two decades Cambodia has enjoyed duty-free access to the European Union single market through the so-called “Everything but Arms” agreements. But now the EU is considering scrapping the deal.
— Made For Minds

Cambodia PM threatens to deploy troops if opposition leaders return
Cambodia’s prime minister threatened on Monday to deploy the military if leaders and supporters of the disbanded main opposition party return from exile next month in what he would regard as an attempted coup d’etat.
— Reuters

Unions Oppose Ministry’s Reversal on Self-Employed Foreign Workers Ban
Some 50 unions and civil society groups on Monday said they wanted the government to reinstate a ban on foreigners working in certain self-employed jobs after the ban was reversed this weekend just over a month after being issued, according to a statement.
— VOD

ADB continues its support of Kingdom’s financial inclusion
The Asian Development Bank (ADB) has approved a $40 million policy-based loan to support poor and rural households and improve their financial access, it said.
— The Phnom Penh Post

Hun Sen Orders Troops to ‘Use All Kinds of Weapons’ as Rainsy Seeks Return
Prime Minister Hun Sen on Monday ordered the deployment of the country’s armed forces ahead of exiled opposition leader Sam Rainsy’s promised return on November 9.
— VOD

Alarming increase in road accidents and deaths
Despite multiple road safety campaigns this year, the number of accidents rose by an alarming 32 percent and the death toll jumped by 27 percent, a police report published yesterday showed.
— Khmer Times

20% of Garbage in Cambodia Is Plastic Waste
Cambodia produces nearly 4 million tons of garbage annually, about 20 percent of which is plastic waste, according to a report of the Ministry of Environment.
— AKP

Chinese Internet Scammers Arrested in Kampot
Reports from Kampot province that on the morning of October 7, 2019, there was an online gambling crackdown in Kampong Bay village, , Kampot town.
— CNE

Gov’t backtracks on ban on self-employed foreigners
Foreigners will again be allowed to be self-employed in a bid to attract skills and investment to the Kingdom, after a ban on them running small businesses that could affect the livelihoods of Cambodians was proposed in August.
— The Phnom Penh Post

Kampot Clamping Continues
On the morning of October 7, 2019, the Kampot City Police continued to put clamps on illegally parked vehicles near the ABA Bank.
— CNE

Ensure school safety: Hun Sen
Prime Minister Hun Sen has asked all municipal and provincials authorities to check all school buildings across the Kingdom to ensure that they are safe as the new school year is approaching.
— Khmer Times

Hun Sen says coup supporters will be caught in Thailand
Prime Minister Hun Sen yesterday vowed to cooperate with Thai authorities to arrest Sam Rainsy’s supporters who are aiding him with plans to stage a coup on November 9 and have fled to Bangkok.
— Khmer Times

PM Hun Sen Awards 443 “A” Graders with iPad and $500
Cambodian Prime Minister Hun Sen awarded an iPad, USD 500, books and other souvenirs to each of the 443 grade “A” students of academic year 2019, speaking in a meeting with A graders, held Monday at the Peace Palace.
— Fresh News

Ministry official refutes betting link
Ministry of Education, Youth and Sport secretary of state Sar Sokha denied an allegation on Monday which implicates him in illegal online gambling operations. He also requested the police intervene by taking immediate measures against those responsible for spreading the fake news.
— The Phnom Penh Post

Father who raped girl, 14, appeals conviction
The Appeal Court in Phnom Penh on Monday heard the case of a man sentenced to 10 years in prison for raping his daughter between August and September 2017.
— The Phnom Penh Post

Assembly passes construction bill
The National Assembly unanimously approved the Draft Law on Construction on Monday. It is meant to strengthen the management of building projects and consists of 22 chapters and 111 articles.
— The Phnom Penh Post

Groups want foreigner worker ban reinstated
Representatives of more than 50 groups yesterday urged the government to reconsider its decision to rescind the ban on foreigners working in the informal sector.
— Khmer Times

Official denies allegations linking him to illegal gambling
Education Ministry secretary of state Sar Sokha has requested the National Police and Military Police to investigate rumours by illegal gambling operators that he was backing their businesses.
— Khmer Times