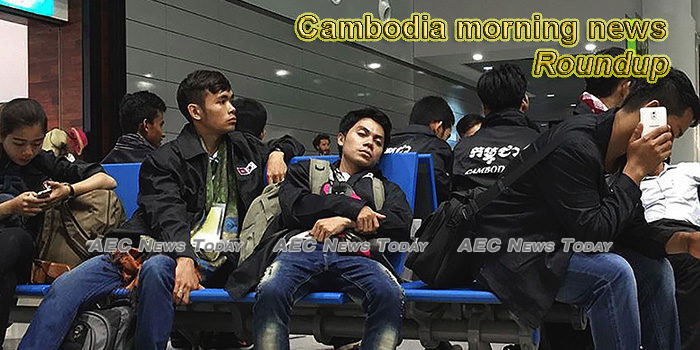 Waste From Chinese Gold Mines Sickens Villagers, Kills Livestock and Fish in Cambodia
Villagers in Cambodia’s Kratie and Mondulkiri provinces are voicing fears for their health following the release into rivers of toxic waste from Chinese gold mines that has sickened local residents and killed livestock and fish, local sources say.
— RFA

EBA deal withdrawal wouldn’t affect operations, say most EuroCham members
The European Chamber of Commerce (EuroCham) members in the recent EuroCham Business Confidence Survey 2019 do not expect a withdrawal of the Everything-but-arms (EBA) scheme to have an impact on their operations.
— Khmer Times

Cambodia’s export up 6.45 percent in the last ten months
The minister, speaking during a ministerial meeting Wednesday, said exported goods during the 10-month period this year were worth some $10,813,000,000 compared to $10,158,000,000 of the same period in 2018. In terms of value, the latest figures showed an increase of 6.45 percent from last year.
— Thmey Thmey

Patrol finds 200 snares in forest community
More than 200 illegal snares have over the past two weeks been removed from the Prambei Mom Forest community area in Kampong Speu’s Thpong district.
— The Phnom Penh Post

Chinese Tourists to Cambodia Grow, But Yield Little Revenue For Locals
More than two million Chinese tourists visited Cambodia in the first 10 months of the year, the government said in a report, representing nearly a quarter increase for the same period in 2018, but a local tourism association suggested numbers had dwindled and yielded little revenue for Cambodians.
— RFA

Cambodian economic growth among highest worldwide
Phnom Penh, Dec 19 (Prensa Latina) Senior Cambodian officials and experts expressed their conviction that the national economy will expand by more than 7% this year, one of the highest rates in the region and the world.
— Prensa Latina

Ordinary Cambodians Can Only Look On, As Cambodia Ranks Among Most Indebted Countries to China
Until two years ago, the lives of Paong Lat’s family revolved mostly around their small farm, daily fish catch, their sales at the local market, and some occasional day labor.
— VOA

Vietnam, Cambodia hold joint rescue drill
The drill is to implement a protocol on search and rescue cooperation in mainland border area signed between the two defence ministries on July 20, 2017. It is also a humanitarian assistance and disaster relief activity within the framework of the ASEAN Defence Ministers’ Meeting (ADMM).
— Nhan Dan

Mekong countries strengthen river management cooperation
The Mekong River Commission and the Lancang-Mekong Water Resources Cooperation Center have signed a memorandum of understanding to improve the management of the Mekong river.
— Khmer Times

5 Chinese Arrested After Kam. Speu KTV Violence
A violent incident occurred in a remote part of Kampong Speu province at 8.20 minutes on the night of December 18, 2019.
— CNE

Cambodian goods to stock 7-Elevens across Thailand
Some 30 varieties of Cambodian goods will find their way into Thai 7-Eleven stores by early next year, with negotiations extended to bring the US-Japanese brand to the Kingdom.
— The Phnom Penh Post

Minister calls for Mekong collaboration
Minister of Public Works and Transport Sun Chanthol on Wednesday called for further collaboration in the Greater Mekong Subregion (GMS) for more attractive investment, trade and tourism in the region.
— The Phnom Penh Post

Cambodia, Indonesia Mark 60 Years of Friendship
The Embassy of the Republic of Indonesia in Phnom Penh in collaboration with the Ministry of Foreign Affairs and International Cooperation of the Kingdom of Cambodia have launched a book and organised a seminar to commemorate the 60th Anniversary of the Diplomatic Relationship between Cambodia and Indonesia in 2019.
— AKP

Relationship with Indonesia marked during book launch
Indonesian and Cambodian officials are confident relations will continue to move forward as they marked six decades of diplomatic ties during a book launch yesterday.
— Khmer Times

Member vows to quit SCC if case unaddressed
Cambodian Youth Party president Pich Sros yesterday warned he would quit his job on the Supreme Consultative Council if the government failed to work out a case of land reclamation allegedly implicating an army officer in Koh Kong province.
— Khmer Times

Outcomes of Participation of DPM Prak Sokhonn in ASEM FMM14 in Spain Released
The Ministry of Foreign Affairs and International Cooperation (MFA-IC) this afternoon issued a press release on the outcomes of the participation of H.E. Prak Sokhonn, Deputy Prime Minister, Minister of MFA-IC in the 14th ASEM Foreign Ministers’ Meeting in Madrid, Spain.
— AKP

Investment Proposals on US$2 Billion Projects Discussed
Cambodian Investment Board (CIB) has recently convened a meeting to discuss 16 investment proposals worth US$2 billion late this year, according to local media report.
— AKP

CCC passes amendments on 10 articles of Trade Union Law
The Constitutional Council of Cambodia (CCC) on Thursday reviewed and approved the draft law on amendments to 10 articles of the Law on Trade Unions amid criticism from local and international civil society organisations.
— The Phnom Peh Post

YouTube hailed in tackling online abuse in Kingdom
Cambodian officials said recent policy expansions by YouTube to tackle racial discrimination and gender identity-based harassment will help. But abuse on social media remains an issue in the Kingdom as there are currently no laws to combat it.
— The Phnom Penh Post

Tonnes of ‘fake seasoning’ seized
Siem Reap police officials on Wednesday seized 18 tonnes of suspected counterfeit seasoning, detained a suspect and are on the hunt for the operation’s ringleader.
— The Phnom Penh Post

Train Runs Over Drunk’s Arm
A man who apparently passed out drunk on the train line was run over at 5.10 am on the morning of December 19, 2019 in Prey Sal Village, Kakap 2 Commune, Porsenchey District.
— CNE

CDC approves three projects worth $11M
Three investment projects worth more than $11 million were approved by the Council for the Development of Cambodia (CDC) this week, a CDC press release said on Wednesday.
— The Phnom Penh Post

Kingdom’s air passenger traffic grows 12 percent
Passenger traffic at Cambodian airports grew by 12 percent in the first eleven months of this year because of new air routes and new airlines being put into operation.
— Khmer Times

A tour to remember: Inside the home of Sheikh Majibur Rahman
From the outside, the house looks modern and quaint, overlooking a road and riverfront. Its gardens are well-maintained and fresh. However, this home has a dark past.
— Khmer Times

CMAA seeks 2,000 soldiers to partake in mine-clearance
The Cambodian Mine Action and Victim Assistance Authority is seeking 2,000 army personnel to engage in demining so the Kingdom can to achieve its mine-free goal by 2025.
— Khmer Times

Singapore-Cambodia on show at upcoming art festival
The Embassy of Singapore, with the support of the Ministry of Tourism, will be organising a special festival in February to commemorate 55 years of bilateral ties with the Kingdom.
— Khmer Times

United States shows interest in energy sector
Ambassador Patrick Murphy has expressed willingness to push private investors in the United States to work with the Kingdom’s oil and gas sector, so long as Cambodia is keen to coordinate with them.
— Khmer Times

The Inconsistent Actions of the Former EU Trade Commissioner
Over the past two plus years, the EU has been of the view that democracy and respect for human rights in Cambodia has deteriorated. This prompted the EU to launch the procedure that could possibly lead to the withdrawal of its “Everything But Arms” (EBA) scheme.
— Fresh News

Old French Lag Caught For Illegal Entry
At 10:30 am, 19 December 2019 A foreigner named PATRICK JEAN BAPTISTE DALLARI , a 61-year-old French national, came to the office of the Phnom Penh Municipal Police Office to apply for a lost passport.
— CNE