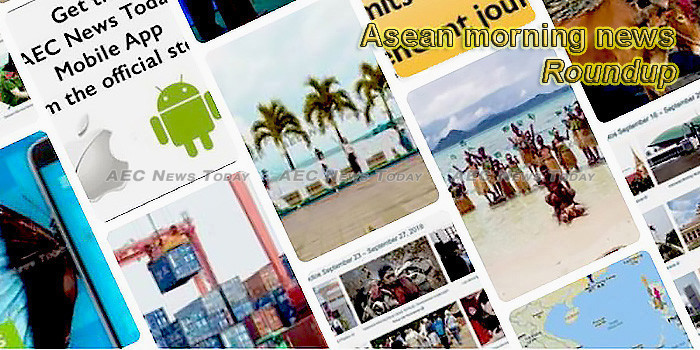 ‘Heavy lifting’ needed for regional trade pact to make deadline
Plans by Australia and 15 other nations to conclude a new regional free trade agreement in a little less than three weeks are uncertain, amid concerns by India about allowing China greater access to its economy.
— Financial Review

China-Philippines Joint Development Negotiations Could Make Or Break China-Southeast Asian Relations – Analysis
Soft power is the capability to use economic or cultural influence to shape the preferences of others.
— Eurasia Review

Two-day govt holiday for Asean summit
The cabinet has approved a two-day holiday for all government offices in Bangkok and Nonthaburi province during the Asean summit and other meetings to be held at Impact Muang Thong Thani early next month.
— Bangkok Post

ASEAN, China talk DOC implementation at 18th SOM meeting
The 18th ASEAN-China Senior Officials’ Meeting (SOM) on the implementation of the Declaration on the Conduct of Parties in the East Sea (DOC) was held in Da Lat city, the Central Highlands province of Lam Dong on October 15.
— Vietnamplus

Vietnam – bright spot in FDI attraction in ASEAN
News and World Report of the US has ranked Vietnam eighth among 29 best economies to invest in, and first among the Association of Southeast Asian Nations (ASEAN) in the list.
— Vietnamplus

ASEAN environment ministers call for intensified cooperation for biodiversity
Top officials from the environment ministries of the ASEAN Member States convened on 8 October 2019 in the 15th ASEAN Ministerial Meeting on the Environment (15th AMME).
— PIA

Southeast Asia in the crosshairs of ‘Islamic State’
A recent knife attack on the security minister of Indonesia is a reminder of the danger of Islamist extremism in Southeast Asia.
— Deutsche Welle

Why Germany is seeking deeper ties with Asean
With supersonic speed in terms of the decision and process, Germany will accede to the Treaty of Amity and Cooperation (TAC) in around two weeks’ time.
— Bangkok Post

What’s Next for ASEAN’s Regional Security Hotline?
Last week, Southeast Asian countries held a series of meetings between themselves as well as partner countries on advancing a regional security hotline.
— The Diplomat

Special Economic Zones in ASEAN: An Introduction for Foreign Investors
To consolidate its emergence as a powerful trading bloc, ASEAN member states have been promoting special economic zones (SEZ) as a cornerstone for efforts to encourage more foreign investment.
— Asean Briefing

PHL urges Asean+3 nations to develop new rice varieties
Manila said it is supporting the proposal of the International Rice Research Institute (Irri) to involve Southeast Asian nations and their trade partners in the development of new rice varieties that are resilient to multiple environment stresses.
— Business Mirror

No Taxes on Farmlands and from Minimum Wage Workers If CPP Leads, Says PM Hun Sen
As long as Cambodian People’s Party (CPP) continues to win the elections, the Royal Government will not charge any taxes on farmland and from minimum wage workers, Prime Minister Hun Sen said in a meeting with Cambodian students in Hungary on 14 October 2019.
— Fresh News

Two Large Mekong River Dams in Laos to Start Operations by End of Year
The first two of five planned large-scale Lao dams on the Mekong river are set to go online before the end of this year, amid controversy over their impact on the environment and people’s livelihoods.
— RFA

Generating test runs at Laos’ Don Sahong dam near Cambodia border
Tests were run last week on the first of four electricity generators at the Don Sahong hydropower plant on the Mekong River in Laos’ Champasak province, after construction began in January 2016.
— The Phnom Penh Post

Digital service tax right move for Malaysia: World Bank economist
The implementation of the Digital Service Tax, which will take effect from Jan 1, 2020, is the right move towards helping the government increase its revenue base from the sales and service tax (SST), said the World Bank lead economist for Malaysia, Richard Record (pix).
— The Sun Daily

Myanmar needs to address structural transformation of the economy: WB
Key takeaways from the latest (Oct 2019) World Bank ‘Asia Pacific Economic Update – Weathering Growing Risks’ pertain to using policy spaces available for the countries in order to boost and sustain growth; to continue trade openness, including through deeper regional integration (within ASEAN and R-CEP and other bilateral arrangements) and enact structural reforms to raise productivity, enhance trade and investment and encourage innovation.
— Mizzima

IMF lowers 2019 growth forecast for Philippines to 5.7%
The International Monetary Fund (IMF) has lowered anew its economic growth forecasts for the Philippines for 2019 and 2020 due to the disappointing performance in the first half, as well as external headwinds caused by the US-China trade war.
— The Philippine Star

Remittances increased by 4.6% to $2.59 billion in August—BSP
Money sent home by Filipinos working overseas increased by 4.6 percent in August to $2.589 billion from $2.476 billion a year ago, the Bangko Sentral ng Pilipinas said in a statement Tuesday.
— Manilastandard.net

Thailand road toll: 554 dead this month, 11,462 this year
Daily News Daily news reports fatalities at the scene of accidents yesterday claimed the lives of 21 people. Yesterday was a busy day on Thailand’s roads at the end of a long weekend. They say the numbers reported are only those that die at the scene.
— The Thaiger

Just 500 People Own 36% of All the Equity in Thailand’s Firms
About 36% of Thailand’s corporate equity is concentrated in the hands of just 500 people, highlighting wealth inequality in the country, a study released by the Bank of Thailand’s research institute shows.
— Bloomberg (paywall)

Hanoi targets all online public services to reach advanced stages by year-end
Hanoi’s mayor considered IT application in operation of government agencies a key instrument for the city to reform administrative procedures towards greater efficiency.
— The Hanoitimes

Asean morning news for May 13

Asean morning news for May 29