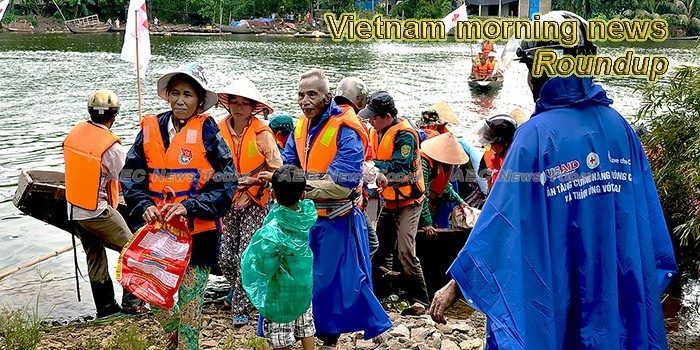 Vietnam jails 5 activists over attempted subversion
A court in Vietnam’s Ho Chi Minh City sentenced five activists to up to 15 years in prison on Friday after finding them guilty of running a political group that worked to overthrow the country’s one-party Communist rule.
— New Jersey Herald

Vietnam to open up telecom market for foreign investors
Vietnam’s commitments to increase foreign equity caps in the telecommunications sectors under the EU-Vietnam Free Trade Agreement (EVFTA) will ease European investors to enter the country’s industry.
— The Hanoi Times

Vietnam to approve TPP-11 by November, prime minister says
Vietnam will likely ratify the 11-member Trans-Pacific Partnership trade agreement in a parliamentary session ending in November, Prime Minister Nguyen Xuan Phuc told Nikkei and other outlets Saturday, in what would be a major step toward bringing the deal into force.
— Nikkei Asian Review (paywall)

Aeon and its three unsuccessful deals in Vietnam
Aeon has officially announced the cancellation of cooperation with Fivimart, a retail chain owned by Nhat Nam JSC, commencing from August 29, because of differences in the two companies’ strategic visions.
— VietNamNet Bridge

Seafood products struggle to land on shelves
Seafood producers are finding it difficult to get their products onto domestic supermarket shelves due to a lack of detailed regulations about the minimum required performance limit (MRLP) applied to prohibited substances.
— Bizhub

Transfer pricing: cars sold in Vietnam three times more expensive than in the US
Transfer pricing has always been a heady problem for the Vietnamese government and ministries since the country began attracting FDI (foreign direct investment).
— VietNamNet Bridge

Environmental tax hike must be rolled out transparently
Dinh Tuan Minh, an economic expert from the Institute for Policy Research and Technology, speaks to the newspaper Kinh tế & Đô thị (Economic and Urban Affairs) on the need for transparency and accountability in the decision to raise the environmental tax on diesel and petrol.
— VietNamNet Bridge

Vietnam to filter out FDI projects with national benefit
Vietnam will get selective with new FDI projects, rejecting those that don’t benefit the country, a senior official says.
— VnExpress

PM lauds Japan’s role in Mekong region development
Prime Minister Nguyen Xuan Phuc lauded the role of Japan in boosting cooperation and development in the Mekong region over the past years in an interview granted to Japanese media on the occasion of his visit to Japan and participation in the 10th Mekong-Japan Summit in the country from October 8-10.
— Nhan Dan Online

UK to support Vietnam in building smart cities
The UK wants to take part in the process of developing high-tech infrastructures in Vietnam.
— The Hanoi Times

Vietnam government to remove foreign ownership cap for public companies
Vietnam seeks to ease foreign investors in pouring into its public companies, considering lifting the foreign stake holding limit at the companies from the current 49 percent to 100 percent.
— The Hanoi Times

A hotel experience like no other in Vietnam
Two famous dead fellows come to mind during a stay at The Reverie Saigon in the heart of Ho Chi Minh City. Liberace and Michelangelo. The extreme bling of the hotel would make Liberace pale even if he strode in with mink coat and fingers dripping with diamonds.
— Sunshine Coast Daily

Why You Should Start Drinking Vietnamese Coffee? Here is top 5 reasons.
Having both parents born and raised in Vietnam, Vietnamese food and drinks were very much present all throughout my life. To this day, many Vietnamese dishes and drinks are my all-time favorite foods and go-tos when deciding what to eat. One particular Vietnamese drink that has left its mark on me is Vietnamese coffee.
— Vietnam Insider