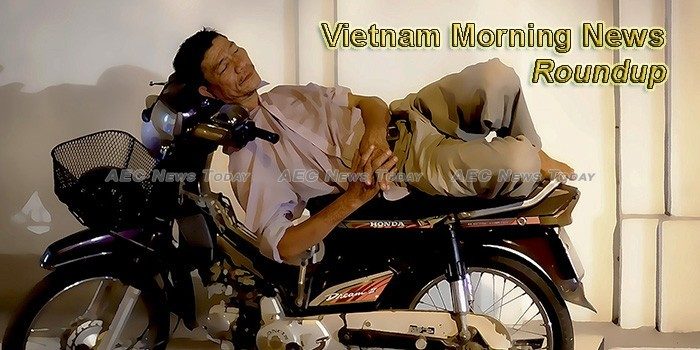 Coal, oil and gas mining exceed six-month targets
Crude oil output reached 7.1 million tonnes in the first six months of this year and in doing so hit 54.3 per cent of the annual target.
— Bizhub

The next generation for the textile industry
The textile and apparel industry was defined as a field with one of the highest growth rates potentials over the next 12 years.
— Viet Nam News

After Pompeo visit, Vietnam to put American beaten and held on trial
Vietnam has ordered that an American man beaten by police and now detained for a month to stand trial, even after Secretary of State Mike Pompeo brought up his case during a visit there this week.
— ABC News

Vietnam boosts its exports to ASEAN
Two and a half years after the ASEAN Economic Community was established, enterprises in Vietnam have found a way to capitalise on the bloc’s import tariff cuts and expand their exports, helping to narrow the years-long trade deficit between Vietnam and ASEAN.
— Nhan Dan Online

Businesses willing to pay more for mobile ads
Although the mobile advertisement market in Vietnam is still modest as compared to regional countries, businesses are said to splash out 200 million USD on advertisement on mobile platform in 2020, much higher than the amount of 78 million USD recorded in 2017.
— VietnamPlus

Sabeco projects profit down 19% in 2018
With Thaibev being a major shareholder of Saigon Beer Alcohol Beverage Corp (Sabeco), Vietnam`s largest domestic brewer considers 2018 to be a turning point for its next development phase, said the company.
— The Hanoi Times

How will Vietnam deal with a 10-year crisis cycle?
Vietnam will have solutions to restrict the effects of any future global economic downturn, according to General Statistics Office’s director Nguyen Bich Lam.
— VietNamNet Bridge

Vietnam launches volunteer campaign to clean the sea
A volunteer driven campaign titled “Clean the Sea” has been launched to raise community awareness of the importance of the sea and to encourage actions to protect the marine environment.
— Nhan Dan Online

Smaller, below the radar Vietnam firms go hi-tech as needed
Small companies see Industry 4.0 not as an image booster, but as a tool to meet customers’ specific requirements.
— VnExpress

Korean footwear firms to increase investment in Vietnam
Footwear enterprises from the Republic of Korea are operating effectively in Vietnam and their investment flows to the country are expected to increase strongly once the EU-Vietnam Free Trade Agreement is signed.
— Nhan Dan Online

Vietnam veteran reflects on damage, healing on anniversary of devastating Burlington floods
One year ago, Burlington was underwater. Rains pounded all of the area, with record flooding devastating lives.
— TMJ 4

H1 car imports slow down to a crawl in Vietnam
Tough regulations have slowed down car imports, advancing the government’s aim of a more level playing field between importers and local assemblers.
— VnExpress

MoIT assists firms in brand building for safe food
Food products must be certified as safe by national or international agencies in addition to building brand awareness to win trust from customers, experts said at a workshop on the morning of July 12.
— Nhan Dan Online

VN’s auto industry at crossroads: report
Viet Nam’s automobile industry is at cross roads, lagging behind ASEAN competitors, according to a report launched by the International Finance Corporation (IFC) and the Ministry of Planning and Investment (MPI) early this week.
— Bizhub