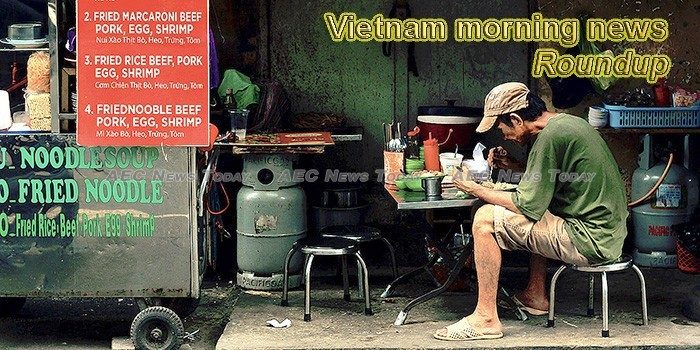 Vietnam stops bitcoin mining imports
Vietnamese businesses and individuals have stopped importing bitcoin mining equipment to the country since the beginning of July, according to the HCM City Customs Department.
— The Nation

Foreign investors step up interest in Vietnam’s textile accessories
Vietnam`s export value of textile and garment materials is expected to grow as foreign investors are pouring millions of USD into the industry.
— The Hanoi Times

Vietnam’s trade ministry to reply to Nghi Son refinery’s fuel export request soon – statement
Vietnam’s Ministry of Industry and Trade will respond to a request from the Nghi Son oil refinery to export fuels such as gasoline and diesel “soon,” it said in a statement on Monday.
— Hellenic Shipping News

Vietnam is most vulnerable in Southeast Asia to trade war
Vietnam, the Philippines and Indonesia risk incurring serious damage from the spiralling trade war between the United States and China, with Hanoi the most exposed because of its high level of exports, according to analysis by FT Confidential Research.
— Nikkei Asian Review

Japan’s open-door policy for foreign workers – a boon for Việt Nam
With a rapidly aging population and declining fertility, Japan had to adopt a more open-door approach towards foreign workers to staff its labour-strapped industries, with Vietnamese workers among the fastest growing groups.
— Viet Nam News

Hanoi to revoke 47 long-delayed projects
Chairman of Hanoi city’s People’s Committee Nguyen Duc Chung said on August 13 that 47 projects in the capital city will have their licences revoked due to delay and violations to the Land Law.
— VietnamPlus

Hung Yen longan becomes dessert on Vietnam Airlines flights
Longan, a speciality from the northern province of Hung Yen, will be served as a dessert on over 70 domestic and international routes of the national flag carrier, Vietnam Airlines.
— Nhan Dan Online

Foreign investment into Ba Ria-Vung Tau soars 30%
The southern province of Ba Ria – Vung Tau has attracted US$2.15 billion of foreign direct investment (FDI) since the beginning of this year, up 30.6 per cent over the same period last year.
— Bizhub

A New Vietnam-Thailand Navy Pact?
This week, the chief of the Thai navy’s hydrographic department paid a visit to Vietnam in yet another official exchange between the two Southeast Asian states.
— The Diplomat (paywall)

Vietnam Renewables Sector Showing Signs Of Life
Recent project announcements in Vietnam’s renewables sector and a general improvement in the investment environment for renewable energy has led us to upwardly revise our renewables capacity and generation forecasts for the country.
— Fitch Solutions