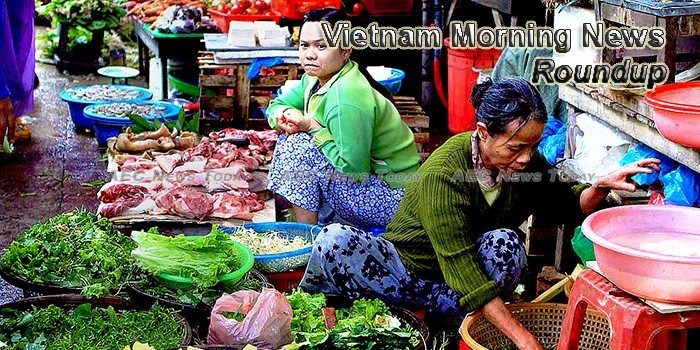 Shrimp surplus stresses sellers
The country’s shrimp export business could be in for a tough year, due to sharp rise in global supply and a drop in market price.
— VietnamNet Bridge

Minister urges fisheries development to base on three pillars
It is necessary to develop the fisheries sector based on three pillars of chain exploitation, processing aligned with the market and using science and technology to develop aquaculture, said Minister of Agriculture and Rural Development Nguyen Xuan Cuong.
— VietnamPlus

Vietnam’s green energy projects sprouting up in slow motion: report
Despite rapid growth, a lack of information is stunting the developments of renewable energy projects in Vietnam.
— VnExpress

E-commerce in Vietnam to reach $10 billion in 2022
The Hanoitimes – With a projected growth rate of 25 percent yearly, Vietnam’s e-commerce market is expected to double to US$10 billion in the next four years.
— The Hanoi Times

Vietnam targets 10 billion USD from fruit, vegetable exports
With the positive outcomes from 2017 and the first quarter of 2018, Vietnam is likely to gross 10 billion USD from exporting fruits and vegetables in the foreseeable future, according to Deputy Minister of Agriculture and Rural Development Le Quoc Doanh.
— VietnamPlus

Banned substance not found in meat samples
The Ministry of Agriculture and Rural Development did not find any trace of the banned substance salbutamol in samples collected from animal breeding farms and slaughterhouses during inspection in January this year.
— Viet Nam News

Cars prices defy expectations by rising
Vietnam imports 523 cars from Thailand in a week, while the price of imported Honda cars is also increasing.
— VietnamNet Bridge

Work needed to strengthen seaport system
Northern central provinces of Vietnam, including Thanh Hoa, Nghe An, and Ha Tinh have advantages to develop port services as they are located in a strategic position to transport goods from Laos – a neighbuoring country to the world.
— VietnamNet Bridge (video)

Deputy PM requests faster disbursement of public investment
The government has set a target of disbursing all public investment capital in 2018 although it acknowledged that this is a tough task, said Deputy Prime Minister Vuong Dinh Hue.
— VietnamPlus

Hanoi not convinced Grab hasn’t formed a monopoly
Uber’s withdrawal from South-east Asia is expected to redraw the ride-hailing markets in countries including Vietnam, even as the local authorities said Grab has not provided adequate evidence to prove that it has not formed a monopoly in Vietnam.
— The Straits Times

​Vietnamese province designs packages in fight against counterfeit Chinese potatoes
The administration of a region in Vietnam’s Central Highlands has planned to create packaging for its own famous type of vegetable with a view to helping buyers differentiate its product from the counterfeit Chinese one, and safeguarding local farmers’ business.
— Tuoi Tre

Gov’t to inspect SBV restructuring efforts
The Government Inspectorate (GI) will conduct 25 crucial inspections this year, including scrutiny of the central bank’s implementation of a restructuring project in the past five years.
— Bizhub

Vietnam eyes building railway line to China border
The route is expected to go through a series of Vietnam northern provinces, cities and link up to China border.
— The Hanoi Times

$3.5b needed for expansion of Noi Bai Airport
The Civil Aviation Authority of Viet Nam (CAAV) has said that it will need close to VND80 trillion (US$3.5 billion) for the proposed expansion project of Noi Bai International Airport.
— VietnamNet Bridge

​Vietnamese mobile carriers allow users to send photo online to complete account registration
Vietnam’s mobile carriers are allowing subscribers to submit their portraits online to complete account registration, as per a new regulation taking effect later this month, instead of the widely condemned option of doing so by physically visiting a store.
— Tuoi Tre