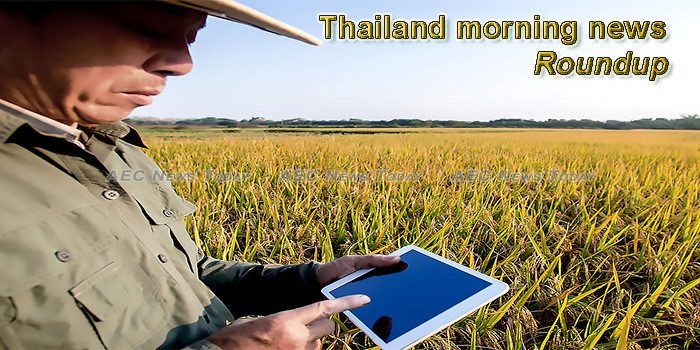 Phuket smartens up to bring tourists back
Reeling from a deadly boat accident this summer, Thailand’s Phuket Island is using “smart” technologies to tackle issues like safety and traffic in an effort to get back on track amid the Southeast Asian tourism boom.
— Nikkei Asian Review

Investigating panel set up to probe THAI’s Zurich-Bangkok flight delay
A panel of investigators has been set up to look into the delayed departure of a recent Thai Airways International flight from Zurich to Bangkok, within a five-day time-frame.
— NNT

Beware of marijuana being misused if it’s legalised, says expert
A MEDICAL lecturer has cautioned policymakers against rushing to legalise marijuana, even if it’s just for medical use.
— The Nation (annoying popups)

Buri Ram police ‘waiting for years’ for housing repair funds
A deputy police chief in this northeastern province says he has been waiting ‘for years’ for the funds to repair the dilapidated living quarters of low-ranking police officers at Nong Song Hong police station in Muang district.
— Bangkok Post (annoying pops)

Thailand aims to tap new export markets
THE COMMERCE Ministry intends to turn a crisis into opportunity by tapping new markets that have emerged as a result of the escalating US-China trade war.
— The Nation

Pheu Thai could be dissolved if Thaksin is found to be interfering, EC warns
PHEU THAI PARTY could be dissolved if it were found to have let former prime minister Thaksin Shinawatra interfere with its internal affairs, a senior Election Commission (EC) official warned yesterday.
— The Nation (annoying popups)

STIMULUS PACKAGE TO ASSIST TOUR OPERATORS
The Fiscal Policy Office of the Finance Ministry plans to launch a stimulus package to boost the country’s tourist business in the last quarter of this year to boost the number of tourists following a drop in the number of visitors from China and Russia, the office’s director-general, Lavaron Sangsnit, said recently.
— The Nation

NCPO on guard against smuggling of drugs, weaponry in Deep South
The National Council for Peace and Order (NCPO) has assigned security units in the southernmost region of Thailand to beef up measures against drug and arms trafficking along the border.
— News Today (video)

Introducing Prayut’s “Queen” in cut-throat power play
As former coup leader Gen Sunthorn Kongsompong’s son, new Army chief Gen Apirat Kongsompong can never say what many people think regarding toppling a government by military force. The real issue, therefore, is what he will actually do in the future, not what he ambiguously said the other day.
— Thai PBS World

Prawit calls for Thaksin sway probe
Deputy Prime Minister Prawit Wongsuwon on Monday urged the Election Commission (EC) to look into whether fugitive former prime minister Thaksin Shinawatra has control over the affairs of the Pheu Thai Party from abroad, which could result in the party’s dissolution for violating the law on political parties.
— Bangkok Post

Fight against gold mine turned Thai village into ‘war zone’
For several hours, villagers cowered in terror, fearing for their lives as the armed men subdued them and tore down the barricades the residents had built on the road to the gold mine nearby. Several trucks then carried out the precious ore.
— Reuters

City Hall to dismantle more than 1,000 huge roadside billboards
The Bangkok Metropolitan Administraion will this Friday start dismantling 1,170 huge billboards, including LCD screens, after the company granted with the permission to install them has failed to pay their fees.
— Thai PBS World

Entertainment sector’s role in promoting value of ageing society
Appreciating the ageing society is becoming more important in Thailand. Even TV dramas are telling stories of elders from a different perspective from that of the past, and are now more positive about being an elder. Our correspondent has more details.
— News Today (video)

Three palm oil proposals to target slump
The Commerce Ministry is proposing three measures to the cabinet over the next few weeks to tackle the domestic oil palm price slump.
— Bangkok Post

3 Growth Themes That Will Lead the Future of Technology
Citigold is a wealth management service for clients with total deposits or investments of 5 million baht and above with Citibank Thailand.
— Bangkok Post

Bangkok is turning into a giant art gallery (video)
Bangkok is renowned for street food and shopping delights as well as notorious nightlife, but the latest effort to woo tourists aims for the cultural high ground by turning the metropolis into an art gallery.
— Bangkok Post

Fast and furious in the mud as Thai buffalo racers mark end of monsoon
Scores of Thais took to their water buffaloes for muddy annual races on Tuesday, marking the end of the monsoon season and the beginning of the rice harvest in a tradition that dates back more than 140 years.
— Reuters