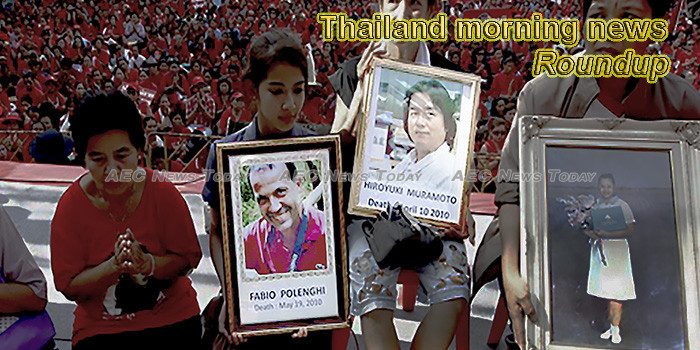 Thailand’s Largest IPO of 2018 Climbs as Much as 3% in Debut
The Thailand future fund, an infrastructure fund put together by the military, jumped in its trading debut in Bangkok.
— Bloomberg (paywall)

Face of next PM will ‘be similar to Prayut’
Deputy Prime Minister Somkid Jatusripitak has hinted the next prime minister will be a person whose face “looks similar” to Prime Minister Prayut Chan-o-cha’s.
— Bangkok Post (annoying popups)

Regime vetoes recreational weed use
The government has rejected calls for marijuana to be decriminalised so that it can be used freely as a recreational drug, saying Thailand at this point has to focus on its use for medical purposes.
— Bangkok Post

Thailand’s Path to First Rate Hike Since 2011 Is Getting Rockier
The long wait for a Bank of Thailand interest-rate hike may continue through November’s policy meeting as inflatio moderates and the outlook for exports darkens.
— Bloomberg (paywall)

Court confirms Don’s right to remain as foreign minister
The Constitutional Court ruled by a majority on Wednesday that Foreign Minister Don Pramudwinai can remain in office as his wife had reduced her private shareholdings to meet the legal limit within the set deadline.
— Bangkok Post (annoying pops)

Government on course to achieve education reform for children
A government-appointed committee in charge of education reform has been working on the implementation of initiatives aimed at benefiting young children.
— News Today (video)

Effective integration of digital technology and farming
In today’s dawning Internet of Things (IoT) era, with so much online and lifestyle aspirations only a click away, disruptive technologies are catalysts for business people to adopt in order to ride the wave of change.
— Bangkok Post

Disruptive technology could cost Thai jobs
Despite launching the Thailand 4.0 initiative two years ago, Thailand is on track to lose as many as three million jobs over the next 20 years if it fails to adapt to new disruptive technologies, according to the Thailand Development Research Institute (TDRI).
— The Asean Post

BTSC advised to cap train fares at B65
The Bangkok Metropolitan Administration (BMA) is negotiating with the Bangkok Mass Transit System Plc (BTSC), which operates the skytrain network, to cap train fares at 65 baht as a condition of being granted a 30-year contract to operate the entire system after its concession for the original route ends in 2029.
— Bangkok Post

7-Eleven’s delivery push fails to rattle
With 7-Eleven offering free-of-charge delivery service from 3,000 stores in Bangkok and the suburbs, food delivery services have found that it’s not a big deal.
— Bangkok Post

Sudarat affirms Phue Thai’s stance against pro-regime camp
Key Pheu Thai Party figure, Khunying Sudarat Keyuraphan, has insisted the party would not be ready to work with Gen Prayut Chan-o-cha if he happens to stay in power after the election.
— Thai PBS

Thailand struggling to get back on Chinese express
While the rest of Asia-Pacific countries, mainly Japan, Korea and Vietnam, expect strong growth in Chinese tourist arrivals in the third quarter of this year, Thailand has been struggling to bring back Chinese tourists since the boat tragedy in Phuket.
— Bangkok Post

Health Min eyes making marijuana Category 2 drug to allow for medical use
Thailand’s Ministry of Public Health is planning to change the status of marijuana from a Category 5 narcotic drug to Category 2 in a bid to unlock medical use of the plant.
— NNT

NLA panel gives nod to land tax bill
A bill on a land and buildings tax, that was stuck in a National Legislative Assembly (NLA) standing committee for more than a year, has finally won the panel’s approval and is expected to go before lawmakers for a second reading next month.
— Bangkok Post

Police say no action yet taken against critical video
Police have clarified that no action has yet been taken against those behind a rap video critical of the nation and its government but assured the public that investigations are ongoing, with the Prime Minister saying he is paying the matter no attention.
— News Today (video)

Video game addiction up by 400%
The number of children suffering from video-game addiction surged by 400% last year, according to the Department of Mental Health, which is calling for stricter controls on playing video games, or so-called e-sports.
— Bangkok Post

OIE downplays dip in factory output
The Office of Industrial Economics (OIE) has brushed aside any concern over the decline in the Manufacturing Production Index (MPI) in September, saying growth in the first nine months remained healthy.
— Bangkok Post

Manchester condos to lure Thai buyers
Investment and business consultant PNN Capital Co will introduce a condominium in Manchester to Thai investment buyers as an alternative to London apartments because the northwestern English city is drawing relocations of large firms.
— Bangkok Post

Experts back bill’s ban on exams, extra protections for young kids
THE EARLY Childhood Development Bill is expected to significantly impact the lives of young children if and when it is passed.
— The Nation (annoying popups)

Study pushes rubber for national agenda
The government is being urged to add rubber prices to the national agenda, requiring immediate attention, as the country has lost several billions of baht from the rubber price slump.
— Bangkok Post