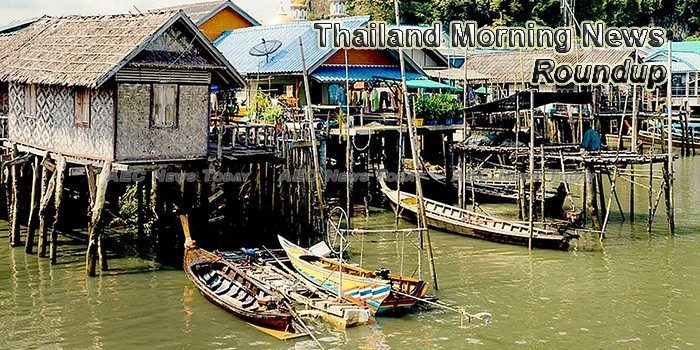 Thailand to increase taxes on crypto-currency while most countries make it easier
An increasing number of countries are looking at the cryptocurrency space, with three national governments launching efforts to regulate and examine projects in the last two weeks. – with a particular focus on tax policy.
— The Pattaya News

BOT calls for calm over valuation loss on foreign reserves
The Bank of Thailand (BOT) on Monday said there was no need for alarm over a news report concerning its foreign reserves, explaining that that the valuation loss that had been made was the natural result of its responsibility for currency stability during a period of baht appreciation.
— The Nation

Private sector forecasts this year’s growth estimate of 4%
The Joint Standing Committee on Commerce, Industry and Banking has predicted that the overall Thai economy will likely expand by 4% in the first quarter this year or the same rate as the last quarter of 2017.
— NNT

Japan, China eye Belt & Road council
The Japanese and Chinese governments plan to agree to establish a public-private council to discuss joint projects in other nations related to China’s Belt and Road initiative (see below) , which seeks to create a huge economic zone, sources said.
— The Nation

Satun under rabies spotlight as suspect cow put down
LIVESTOCK officials have euthanised a cow that had just given birth out of suspicion that it might have caught rabies. Raised in a pen in Satun’s Muang district, the cow was bitten by a stray dog late last month.
— The Nation

Private-sector optimism sets in
THE country’s peak private-sector advisory grouping is sticking with its estimates for the economy to grow as much as 4.5 per cent alongside an increase in exports of up to 8 per cent for this year after economic gauges in the first quarter pointed to sustained momentum.
— The Nation

Campaigners against Doi Suthep housing eye demolition
They did not need to say the word but the representatives of both the government and leaders in Chiang Mai campaigners knew the fate of the controversial residential project on the foot of Doi Suthep.
— Bangkok Post

Preventive measures introduced as Bangkok braces for heavy rainfall in May
Thai authorities have rolled out preventive measures against flooding in Bangkok after the Thai Meteorological Department (TMD) forecast heavy rains this month, reported the Bangkok Post on Monday (May 7).
— Channel NewsAsia

Companies pitch plans to boost Northeast
THE Provincial Federations of Thai Industries (FTI) have proposed development projects that would benefit the Northeast, including artificial lakes in Surin province.
— The Nation

Buriram gears up for MotoGP 2018 on Oct 5-7
Tourism and Sports Minister Weerasak Kowsurat has confirmed that Buriram province will host MotoGP 2018 from October 5th – 7th this year.
— NNT

Siemens touts gas turbine edge for Thailand
GERMAN technology powerhouse Siemens is keen on supplying its cutting edge HL-class gas turbine to customers in Thailand to meet the country’s aim of upgrading to high-efficiency energy with low cost.
— The Nation

Rice in govt warehouses to be auctioned for 1st time this year
The Department of Foreign Trade is to organize a rice auction for the first time this year of more than 40,000 tons of rice for general consumption.
— NNT

MVNOs try to see a way forward
The business of mobile virtual network operators (MVNOs) has been frozen because of loopholes in regulations, and Penguin, the only active MVNO, is taking bets on whether the business model has a future under the existing ecosystem.
— Bangkok Post

GSB sets target to become biggest and best bank in Thailand
The Government Savings Bank (GSB) has announced its plan to establish itself as the country’s best and biggest bank after witnessing a remarkable jump in revenue in the first quarter of this year.
— NNT