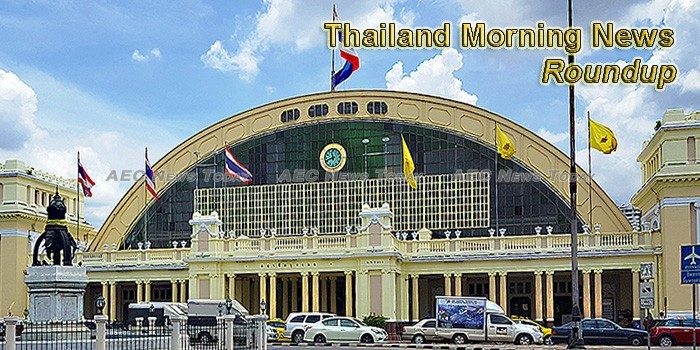 Migrant workers have until June 30 to register or face deportation
Prime Minister Gen Prayut Chan-o-cha has urged alien workers to register and have their nationalities proven before the end of this month.
— NNT

Interior Ministry to mull import ban on electronic trash with Article 44
An ad hoc committee is to be set up to address the problem of electronic trash and to consider whether Article 44 of the interim Constitution should be invoked by the prime minister to ban the import of electronic garbage with immediate effect.
— Thai PBS

Cabinet approves tax privileges for foreign firms opening headquarters in Thailand
The Cabinet has agreed to offer tax reductions and exemptions to some foreign companies which set up head offices in Thailand.
— News Today (video)

10-year irrigation plan set in support of EEC
Rayong Irrigation Project has come up with a 10-year plan to ensure water availability for the Eastern Economic Corridor project.
— NNT

Thailand seeks formation of cassava bloc
Thailand wants to form a coalition with Cambodia, Laos, and Vietnam, all cassava-producing nations, to guarantee a stable price for the commodity and avoid future price wars, according to an article published yesterday in the Bangkok Post.
— Khmer Times

New tax to encourage B20 use
The Excise Department is imposing a tax on B20 biodiesel that is 82 satang lower than the B7 tax in a push to make the former’s retail price three baht per litre cheaper than the latter’s, says a senior official.
— Bangkok Post

Measures controlling the use of paraquat being developed
The Biotechnology Alliance Association (BAA) recently held a meeting to develop measures to control the use of certain herbicides before proposing them to the Department of Agriculture (DOA).
— NNT

PM eyes boosting investor confidence during UK visit
The Prime Minister is scheduled to visit the United Kingdom next week, during which he intends to enhance bilateral relations and boost investors’ confidence in the Thai economy.
— News Today (video)

Call to boost financial literacy in Thailand
Given that the majority of Myanmar people lack the knowledge to use digital payment platforms, all the players in the finance industry must work together to educate them so the nation can become a cashless society, according to Country Manager of Visa Myanmar, Arturo Planell.
— Borneo Bulletin/ The Nation/ ANN

Measures issued in response to high diesel price, oversupply of oil palm
The Thai government has promised an acceptable resolution to the oil palm oversupply problem while transport operators are poised to ask for an adjustment to their rates despite a state cap on diesel prices, currently set at 30 baht per liter.
— NNT

True slashes 1Gbps fibre internet price by 70%
True Corporation is cutting its price by 70% for its 1 gigabit per second (Gbps) fibre internet service to increase its premium group of users and prepare for saturation of the fixed broadband market by 2020.
— Bangkok Post

Polls point to strong backing among Thais for death penalty
CAPITAL PUNISHMENT, despite growing opposition among international organisations and other countries, is strongly supported by the majority of Thai people, according to surveys.
— The Nation (annoying popup autoplay video)

Thailand dengue death toll rises to 24
Since our update on the dengue fever situation in Thailand two weeks ago, the Bureau of Epidemiology, Ministry of Public Health, Thailand has reported an addition five dengue related fatalities, bringing the death toll to 24, as of June 18.
— Outbreak News Today

Corporate Establishment in Thailand: What You Need to Know
Foreign investors contemplating new business undertakings in Thailand should carefully consider the Thai Foreign Business Act B.E. 2542 (FBA) before setting up operations in the country.
— Asean Briefing

Genius Academy 2018 gets Thai SMEs ready for Global Market
Thailand plans to develop value-added SMEs to drive its economy. The Department of Industrial Promotion, the corresponding authority, has been working hard to train Thailand’s brightest entrepreneurs to be ready for the global market. Our correspondent has more details.
— News Today (video)