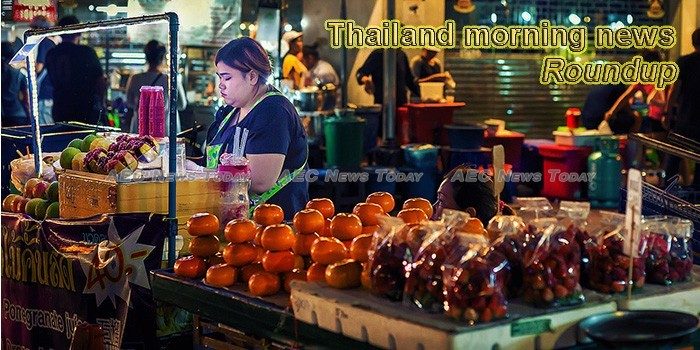 Domestic car sales seen up 12% in 2018: Toyota
Thailand’s total domestic car sales are expected to be 980,000 units this year, up 12% from 2017, and more than previously expected, Toyota Motor Corp’s Thai unit said on Wednesday.
— Bangkok Post

Phuket’s tourism situation ‘back to normal’, says V/Gov
According to a report issued on the National News Bureau of Thailand (NNT) website yesterday, one of Phuket’s vice governors has stated that Phuket’s tourism, particularly involving Chinese tourists, has recovered with extra safety measures currently implemented.
— The Phuket News

Rescuers arrive for 3,000 stranded after Laos dam collapse: media
Rescue teams from China and Thailand headed on Wednesday into a remote part of landlocked Laos, where more than 3,000 people were stranded after a dam collapse sent a deluge of water across a swathe of villages, domestic media said.
— Reuters

Survey: Thais online for over 10 hours every day
The survey was conducted by the Electronic Transactions Development Agency (ETDA) during June 15 to July 18 this year with 10,787 respondents.
— Bangkok Post

EXIM Bank foresees export growth of 7-9% in 2018
Thai exports will likely continue to do well throughout this year, with a growth rate of 7-9 percent, according to the projection by the Export-Import Bank of Thailand (EXIM Bank).
— NNT

Dam fallout likely for Ratch
Analysts are at odds about whether the collapse of a hydropower dam in southeastern Laos will take a toll on earnings at Ratchaburi Electricity Generating Holding Plc (Ratch), as the company holds a 25% stake in the Xe-Pian Xe-Namnoy Hydroelectric Power Project.
— Bangkok Post

Pattaya’s reinvention successful – “TAT strongly opposes any form of sex tourism”
Nestled on the east coast of the Gulf of Thailand, about 100km from Bangkok, Pattaya is one of Asia’s most popular tourist attractions, ranking number eight on of the list of top 20 destinations across Asia by international overnight arrivals, according to Mastercard’s Asia Pacific Destinations Index 2017.
— The Thaiger

Tourists should have insurance, forum told
Travel insurance should be mandatory for visitors to Thailand to ease the burden on the tourist
— Bangkok Post

Thailand seeing cheaper tuna amid US, China trade fight
Thailand is seeing an increase in tuna raw material imports from China as exports that would normally go to the US are being ‘dumped’ in Thailand amid new US tariffs, the Bangkok Post reported.
–UCN

What it really takes to make 5G a reality in Thailand
5G in Thailand is not yet around the corner. On the one hand, there is talk of spectrum without laying out a clear roadmap as to when and how it will be made available. On the other, telecom operators are trying to outshine one another with isolated trials that they claim set them on a path to being the first to 5G. None of this constitutes a credible 5G strategy.
— The Nation

Thailand joins international aid effort for flooded Laos
INTERNATIONAL SUPPORT from both the private and government sectors is pouring into Laos after the country’s southeastern Attapeu province was hit by a severe flash flood following the collapse of a hydropower saddle dam.
— The Nation

BOI approves seven more Food Innopolis centers
The Board of Investment (BOI) has agreed to add seven more ‘Food Innopolis’ centers to attract more investment and increase the value of the country’s crops through research and development.
— NNT

Thailand to send help to Laos after hydropower dam collapse
The Thai Prime Minister has instructed officials to provide assistance to Laos, following the collapse of Xepian-Xe Nam Noy hydropower dam in the southern region.
— NNT

E-commerce on track to reach B3.06tn
The value of Thailand’s e-commerce market is expected to reach 3.06 trillion baht this year, up 8.5% from last year, driven by the continuous growth of social commerce.
— Bangkok Post

Supreme Patriarch urges all temples to pray for Lao victims
The Supreme Patriarch has ordered all temples in the Northeast to gather food and other necessities to be delivered to Buddhism offices in their respective provinces so they can be sent to Laos to help the flood victims.
— Thai PBS

SCG ramps up investments by 20%
SIAM Cement Group (SCG) plans to boost its 2019 investment budget by 20 per cent from this year to Bt60 billion, the group’s vice president-finance and investment and chief financial officer, Chaovalit Ekabut, said yesterday.
— The Nation

Thai rescue team arrives in Laos to help victims of dam collapse
A forward team of about 30 rescuers and life-saving experts of a private relief organization known as “Hook 31 Foundation” in Nakhon Ratchasima or Korat is waiting to cross the border into Laos to help victims of flooding that resulted from the collapse of a hydropower dam in southeastern Attapeu province’s Sanamxay district.
— Thai PBS

Teacher appeals to 30 former students to repay student loans
A teacher has appealed to 30 of her former pupils to repay their student loans since she is their guarantor and now her house and land are to be seized.
— Bangkok Post

Bangkok to stage supercar show
The Emporium and EmQuartier shopping complexes are working with high-end auto importers to stage “The Emporium-The EmQuartier Speed Revolutionaire”, featuring premium luxury cars and supercars worth over Bt250 million.
— The Nation