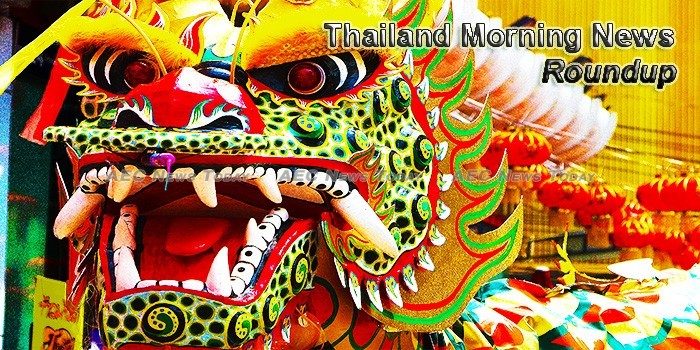 Thailand to declare IUU-free Thailand
The Spokeswoman for the Ministry of Foreign Affairs, Bussadee Santipitak, said the Thai government will declare the policy of Thailand being freed from Illegal, Unreported, and Unregulated (IUU) fishing.
— NNT

BOT boss warns of possible stormy seas ahead
Bank of Thailand governor Veerathai Santiprabhob has warned there is a risk of bigger market corrections ahead, saying global rate hikes could adversely affect Thai firms.
— The Nation

Somkid warns of digital stall
Digital transformation in Thailand should be complete by 2021 or the economy will face falling GDP growth and fail to become a digital economy, says Somkid Jatusripitak, the Deputy Prime Minister.
— Bangkok Post

Thailand in No Rush to Raise Interest Rates: Central Bank Chief
Thailand is in no rush to tighten its monetary policy despite rising global interest rates, thanks to ample domestic liquidity and benign inflation, the central bank governor said on Thursday (22/02).
— Jakarta Post/ Reuters

Russia floats idea of innovation pact
RUSSIA wants to work with Thailand to set up a joint innovation fund as a vehicle for collaboration on a range of innovations and research and development aimed at boosting the digital economies of both countries, Deputy Prime Minister Somkid Jatusripitak said.
— The Nation

Army told to pay mother of slain son
THE CIVIL Court yesterday ordered the Royal Thai Army to pay Bt1.87-million compensation to a woman whose only son died in a military prison two years ago.
— The Nation (annoying popups)

Risks flagged on takeover bets abroad
CONCERNS have been raised over a spate of aggressive moves in mergers and acquisitions (M&As) by Thai companies, with a top ratings agency casting doubts over whether these deals will generate higher profits.
— The Nation

Administrative, justice reforms to be pushed forward
The public administrative and justice reform committees have announced plans to expedite their work, aiming to respond to the Thai people’s needs and to give them easier access to state services.
— NNT

Doubling of Thai investments in Cambodia targeted
CAMBODIAN Commerce Minister Sorasak Pan expects the value of Thai direct investments in his country will double by 2020, driven by expansion in services, agricultural processing, small and medium-sized enterprises and restaurants.
— The Nation

Trade between Thailand, Cambodia grows 10%
Bilateral trade between Cambodia and Thailand reached $6 billion last year, up 10 percent from the year before, according to a Thai Embassy official. Jirawuth Suwanna-arj, minister counsellor at the Office of Commercial Affairs in the Thai Embassy, announced the figure yesterday at an event sponsored by the Thai Ministry of Commerce.
— The Phnom Penh Post

Hitachi Consulting Selected to Design ‘Smart City’ Services For One Bangkok, Thailand’s Largest Private Sector Property Project
Hitachi Consulting Corporation, a subsidiary of Hitachi, Ltd (TSE: 6501), and a leading provider of consulting-led solutions and services, today announced that is has been retained by Frasers Property and TCC Group, to assist in the design of “smart city” services for One Bangkok. One Bangkok is Thailand’s first fully integrated district that is built on people-centric principles and a focus on environmental sustainability and smart city living.
— Cision PR Newswire

Thailand’s Kasikornbank selects Avaloq to support private banking business
KASIKORNBANK (KBank), one of the largest commercial banks in Thailand, has chosen the Avaloq Banking Suite to support the growth of its private banking and wealth management business.
— Finextra

PTTGC announces its operating results for 2017 with its highest-ever net profit of 39,298 million baht
PTT Global Chemical Public Company Limited (PTTGC), Thailand’s largest integrated petrochemical and refining business, today announced it earned a net profit of 39,298 million baht in 2017, the highest ever for the company since it was established.
— Cision PR Newswire

SCBAM mulls new crypto fund
SCB Asset Management (SCBAM) aims to retain its top spot in terms of assets under management (AUM) in the industry through offering new investment products, with the possibility of launching a cryptocurrency fund.
— Bangkok Post

Aflatoxin found in all 27 milk samples tested, but they are still safe for consumption
Twenty-seven samples of school milk and fresh milk from retail stores were all found to be contaminated with aflatoxin, a poisonous carcinogen produced by fungi, but its amount is within acceptable level, according to the Foundation for the Consumers’ Smart Buyer Magazine.
— Thai PBS