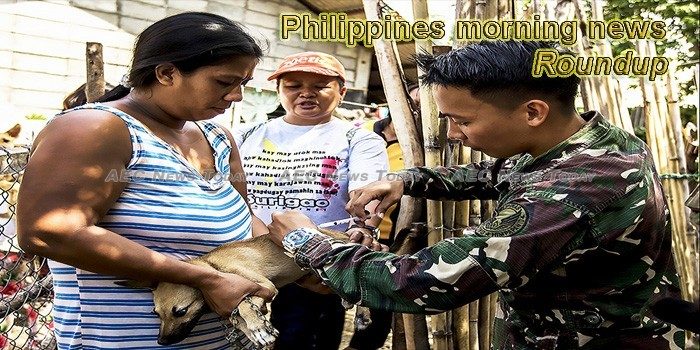 Government incurred P2.6-b deficit in August as spending rose
The government incurred a fiscal deficit of P2.6 billion in August, as expenditures jumped 29 percent, exceeding the revenue growth of 11 percent, the Bureau of the Treasury said Monday.
— Manilastandard.net

US delivers P117.4-M ammo to AFP for anti-terrorism training
The United States government on Monday announced the delivery of P117.4 million ($2.2 million) worth of ammunition to the Armed Forces of the Philippines (AFP) for use in its counterterrorism training.
— Manila Bulletin

PHL had ‘zero real wage growth’–WB report
THE absence of a real wage growth in the Philippines is among the major obstacles that could undermine the country’s efforts in turning the “American dream” of every Filipino into reality, according to the World Bank.
— Business Mirror

ARMM gov offers infra budget to fund Bangsamoro region polls
An official of the Autonomous Region in Muslim Mindanao (ARMM) has proposed the realignment of the regional government’s 2019 budget to fund the Bangsamoro Organic Law (BOL) plebiscite amid reports that no money was allocated for the electoral exercise.
— Philippine Daily Inquirer

BSP to raise rates by 75 bps more
The Bangko Sentral ng Pilipinas (BSP) is expected to raise key rates by another 75 basis points (bps) before the year closes to lessen the impact of the escalating US-China trade war and high oil prices on the peso, according to ING Bank.
— Manila Bulletin

World Bank backs removal of productivity constraints
The World Bank is urging the removal of constraints affecting productivity — such as restrictions on foreign investments — to enable the country to attain its long-term agenda of being a poverty-free society by 2040.
— The Philippine Star

BOC seizes P5.5M-worth of firearms accessories
Several firearms accessories such as magazines and ammunition believed to be used for armed insurgency and shipped to the country using balikbayan boxes were seized by the Bureau of Customs Monday.
— Manila Bulletin

New guidelines to restrict media coverage of House proceedings
Reporters may no longer be allowed to hold “ambush” interviews if the House of Representatives approves proposed guidelines for media coverage.
— The Manila Times

AgSur farmers receive P2.5M economic benefits
Years of waiting is finally over for some 45 Agrarian Reform Beneficiaries (ARBs) of the NDC Guthrie Estates Incorporated (NGEI) cooperative after the recent distribution of economic benefits held in this province.
— Philippine Information Agency

Australia affirms support for Phlilippines anti-terror drive
The Royal Australian Navy (RAN) and Philippine Navy (PN) started yesterday another round of joint maritime security exercises in this city that will run until Oct. 4.
— The Philippine Star

PH needs to triple average Pinoy income – WB
The Philippines’ needs to triple the average annual productivity income of Filipinos in the next two decades to achieve the long-term vision for the country, the World Bank (WB) said yesterday.
— Manila Bulletin

T-bills undersubscribed as investors await monetary board, US Fed meetings
INVESTORS shied away from Treasury bills (T-bills), prompting the Bureau of the Treasury (BTr) to reject bids for all tenors on Monday’s auction.
— Business Mirror

Philippines military warn delays in rebuilding Marawi may create more ‘enemies of the state’
It is almost a year since the Philippines military forced Islamic state fighters to retreat from the city of Marawi, and life has not returned to normal.
— ABC News