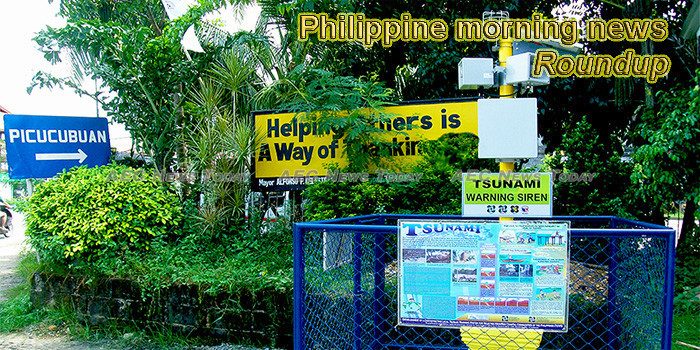 Trade gap widens to $3.93 billion in Sept 2018
Philippine imports hit an all-time high in September while exports remained weak, bringing the trade deficit to $3.93 billion, the highest in nine months amid sustained purchase of capital goods needed for the government’s ambitious infrastructure program, the Philippine Statistics Authority (PSA) reported yesterday, a day before the release of third quarter economic performance.
— The Philippine Star

Japan allots P22.7 billion for air defense, MRT-3 rehab
The government of Japan has provided P22.7 billion worth of aid to the Philippines to enhance the country’s air defense capabilities and rehabilitate the Metro Rail Transit Line 3 (MRT-3), the Department of Foreign Affairs (DFA) said yesterday.
— The Philippine Star

BOI-approved investments up 26%
Investments approved by the Board of Investments (BOI) rose 26 percent in the January to October period from a year ago driven by projects in five key industries.
— The Philippine Star

Foreign reserves dropped to 7-year low of $74.77 billion
The country’s gross international reserves dropped to a seven-year low of $74.77 billion in October, after the government settled some of its foreign exchange obligations and the Bangko Sentral ng Pilipinas helped tempered the fluctuation of the peso against the US dollar.
— Manilastandard.net

No signing seen on PHL-China oil exploration during Xi’s visit
NO deals on joint exploration are expected to be signed during the visit of Chinese President Xi Jinping this month, two Cabinet members said on Wednesday, but did not rule out the possibility that discussions on the matter might at least be included later in the agenda.
— Business Mirror

New import tack unlikely to spoil 500,000 MT rice tender, NFA says
The National Food Authority (NFA) on Wednesday expressed confidence that bidders are unlikely to back out from the open tender for the supply of some 500,000 metric tons (MT) of rice via open tender, amid some traders’ concerns over import regulations.
— Business Mirror

PH agri output dips in July-Sept
THE Philippines’ agricultural output decreased by 0.83 percent in the third quarter of 2018, which was blamed on the typhoons that hit the country in the period.
— The Manila Times

Filipinos and critical illness financing gap
Impact of illnesses on one’s finances have made Filipinos more conscious about their health.
— Philippine News Agency

Duterte threatened deployment ban if OFW in UAE executed: Bello
PRESIDENT Rodrigo R. Duterte would have declared a total ban on the deployment of Filipino workers to the United Arab Emirates (UAE) if its government pushed through with the execution of Jennifer Dalquez.
— BusinessWorld Online

Rights Lawyer Gunned Down in Philippines
Unidentified gunmen killed a crusading human rights lawyer in the central Philippines, police said Wednesday, in the latest attack targeting an attorney in the country.
— Benar News

Globe nine-month profit grows 37%
The Philippines’ Globe Telecom has reported a nearly 37% increase in net profit for the first nine months of 2018 to 15.1 billion pesos ($284.5 million) as a result of strong demand for mobile data.
— Telecomasia.net