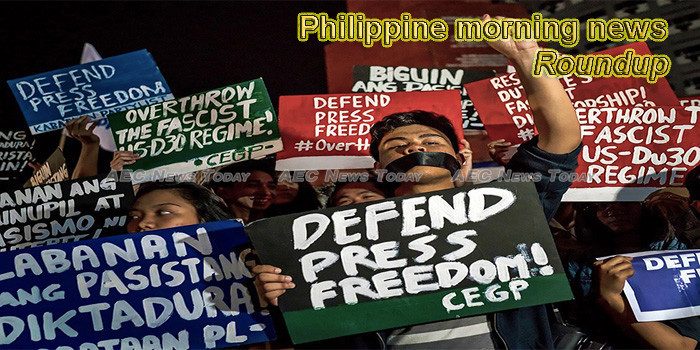 Unstoppable inflation sees Philippines cap rice prices
The Philippines set suggested retail prices (SRP) for rice this week in an attempt to combat soaring inflation, with a top official warning that violators could face up to four years in jail.
— AEC News Today

AFP, PNP in clearing ops post-Rosita; 20 still trapped in mud
THE Philippine National Police (PNP) and the military are continuing clearing operations in areas affected by Typhoon Rosita in Northern Luzon even as the search and rescue continues for the more than 20 people still trapped inside three buildings of the Department of Public Works and Highways in Mountain Province.
— Business Mirror

P4.8-B Metro bus rapid transit a go
The P4.8-billion Metro Manila Bus Rapid Transit (BRT) Line 1 connecting Manila and Quezon City will be a go, with the loan agreement with the World Bank loan to be signed before the year ends.
— Philippine Daily Inquirer

‘Rosita’-affected families now at 30.7K
The National Disaster Risk Reduction and Management Council (NDRRMC) announced that a total of 30,734 families were affected by Typhoon Rosita in 1,019 barangays in Regions 1, 2, 3, 8 and the Cordillera Administrative Region (CAR).
— Philippine News Agency

P4.9M worth of aid extended to ‘Rosita’-affected families
A total of P4.9 million worth of relief assistance has been provided to families affected by Typhoon Rosita as of 7 am, November 1, coming from the combined resources of the Department of Social Welfare and Development (DSWD), local government units (LGUs), non-government organizations, and other groups.
— ReliefWeb

Death toll lowered to 8 in landslide-hit DPWH building
Eight bodies have been recovered so far from a Department of Social Works and Development (DSWD) building buried by a landslide in Natonin, Mountain Province, authorities said Thursday.
— CNN Philippines

Palace eases labor worries on pay hike
Malacañang assured the public on Thursday that the government would consider the interests of both employers and workers in any decision on the petition to increase the minimum daily wage in Metro Manila.
— Philippine Daily Inquirer

$1-B silos will allow PHL to export cereals, Dubai firm says
A Dubai-based firm, which offered to finance the construction of silos costing $1 billion in major rice-producing areas in the country, said the postharvest facility will allow the Philippines to become an exporter of cereals.
— Business Mirror

Peso depreciation bane to big PH firms with substantial dollar debts
The Philippines’ biggest companies face another year of significant repayments of US dollar debt after record amounts came due in 2018, even as a slumping peso makes it costlier to pay back.
— Manila Bulletin

BSP to offer P100 B TDF next week
The central bank’s term deposit facility (TDF) will have a higher auction size of P100 billion on November 7. The Bangko Sentral ng Pilipinas (BSP) increased all three tenors’ offer size by P10 billion each, increasing the volume from P70 billion to P100 billion.
— Manila Bulletin

Depts to World Bank: Correct PH’s biz ranking
The Finance and Trade departments are demanding the World Bank to revise the Philippines’ ranking in its 2019 Ease of Doing Business (EoDB) report, which saw it fall 11 places from 113th to 124th out of 190 economies.
— The Manila Times

Customs chief asked to collect P55b a month
Finance Secretary Carlos Dominguez III said he is confident new Customs commissioner Rey Guerrero will perform his job not only in eliminating corruption in the agency and curbing smuggling but also in collecting an average of P55 billion a month in 2019.
— Manilastandard.net

2018 fiscal deficit target unlikely to be met — DBM
The government may fail to meet its deficit ceiling for the year even as both revenues and spending are growing beyond their respective targets, according to the Department of Budget and Management (DBM).
— The Philippine Star

‘Trabaho’ bill turning off oil, gas investors–Gatchalian
THE chairman of the Senate Committee on Economic Affairs aired serious concerns that potential investors in the vital energy sector were turned off by the reported removal of key incentives in the second round of the Duterte administration’s Tax Reform for Acceleration and Inclusion package or TRAIN 2, dubbed “Trabaho” bill in the House of Representatives.
— Business Mirror

Millions crowd Philippine cemeteries to remember the dead
Millions packed cemeteries across the Catholic Philippines on Thursday (Nov 1) to pay their respects to the dead, on a day that mixes somber reflection with the nation’s penchant for festivity.
— Channel NewsAsia

House committee seeks penalty for telcos hoarding frequencies
THE vice chairman of the House Committee on Ways and Means has urged his colleagues to pass a measure that would penalize telecommunication companies allegedly hoarding frequencies.
— Business Mirror

Group calls government: Protect children’s rights amid drug war
A child’s rights group on Thursday called on the government to prevent children being used as collateral damage in its brutal war against illegal drugs.
— The Philippine Star

Fintech startup AND Systems gets US$2.8M to grow in the Philippines, Myanmar
AND Systems, a fintech startup founded in Mongolia, has raised US$2.8 million from Korean investment firm Rhinos Asset Management.
— e27

Dates to remember for the upcoming elections
It’s almost time for the Commission of Elections (COMELEC) to reveal the list of eligible candidates for the 2019 elections.
— CNN Philippines

Palau plans sunscreen ban to save coral
The tiny Pacific island nation of Palau will ban “reef-toxic” sunscreens from 2020 in what it claims is a world-first initiative to stop chemical pollution killing its famed corals.
— Channel NewsAsia