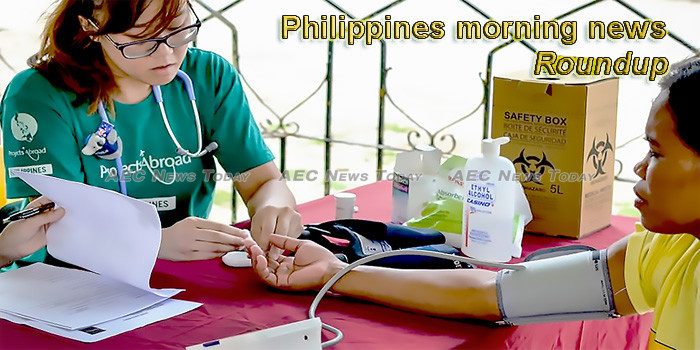 Lazada’s shopping fest offered 50M deals to consumers
China’s annual online shopping frenzy—called “Double 11” after the numbers in the month and date—that generated sales of more than $14 billion within the first two hours in China alone, has also benefited online retailers in the Philippines.
— Business Mirror

Lazada PHL sees record sales from 11.11 event
LAZADA Philippines expects sales from its annual Nov. 11 shopping event on Sunday to double the previous year’s figure, as budget-conscious Filipino consumers flocked to the website to avail of massive discounts on a wide array of products ranging from gadgets to diapers.
— BusinessWorld Online

Imelda Marcos partied after conviction
Hours after former First Lady and now Ilocos Norte Rep. Imelda Romualdez Marcos was found guilty of graft, she went to the birthday party of her daughter Imee.
— The Manila Times

Tobacco production drops 29% following higher excise tax
A group of more than 50,000 tobacco farmers urged the government to reconsider its plan to increase again the excise tax on cigarettes, saying the move would further harm the industry.
— Manilastandard.net

Tax court rules ₱74M improperly collected on Air Philippines jet fuel imports
THE Court of Tax Appeals (CTA) special second division has granted a motion for reconsideration sought by the carrier then known as Air Philippines Corp., finding the improper collection of nearly P74 million from the company on its imports of Jet A-1 aviation fuel between January and July 2007.
— BusinessWorld Online

PH eyes bigger share from oil exploration
President Rodrigo Duterte will insist that the Philippines should get a larger share of the oil that may be discovered during the country’s planned joint exploration with China in the West Philippine Sea.
— Philippine Daily Inquirer

30,000 Filipino sellers participate in Lazada’s sale
A total of 430,000 Southeast Asian merchants, of which 30,000 are Filipino, participated in Lazada’s 11.11 Shopping Festival on Sunday that offered discounts of up to 90 percent on more than a million items, the e-commerce company said.
— The Manila Times

Tacloban asked to refund P36M over unfinished pre-Yolanda drainage project
The local government of Tacloban City has been asked by the Commission on Audit (COA) to refund to the treasury P36 million for failing to prove the accomplishment of a drainage project in March 2013 before Super Typhoon Yolanda came and ravaged the city.
— Rappler

Concerns Grow over Philippines’ Duterte’s Rights Crackdowns
The indictment of the crusading news website Rappler and its editor and founder, Maria Ressa, has raised criticism from human rights and news organizations across the globe and generated deep concerns anew about the commitment to democracy of Philippine President Rodrigo Duterte.
— Asia Sentinel (blog)

PH gets failing mark in ‘rule of law’
While the Philippines is not applying for any financial grant from Millennium Challenge Corp. (MCC), the US aid agency has given the country a failing mark in “rule of law” on its latest scorecard.
— Philippine Daily Inquirer

Isis extends Mindanao grip: analysts
Islamic State appears to be on the rise on the southern Philippine island of Mindanao with up to 100 foreign fighters and a growing number of domestic converts to the extremist group, according to analysts.
— Asean Economist

Fear and killings on the rise in Duterte’s war on drugs
After two years of a violent “war on drugs” in the Philippines, thousands of people are dead and much of the population live in fear of the police.
— Philippine Magazine

Teachers lament measly P3k anniversary bonus
The Alliance of Concerned Teachers on Sunday downplayed the announcement of the Department of Education on the release of the P3,000 anniversary bonus for public school teachers and DepEd staff.
— Manilastandard.net

Philippines internet speed to become faster with 3rd telco
Internet speed in the country may rise to third fastest in Southeast Asia from being among the slowest at present with the provisional third telco player’s commitment in its first year of operations, but telco giant PLDT has advised the public to temper their expectations for at least two years with the arrival of the new major player.
— The Philippine Star

P42M to be spent for Davao’s Pasko Fiesta
THE DAVAO City government has allocated P42 Million for this year’s Pasko Fiesta, a month-long celebration that will kick off with the traditional lighting of the City Hall on Nov. 23.
— BusinessWorld Online