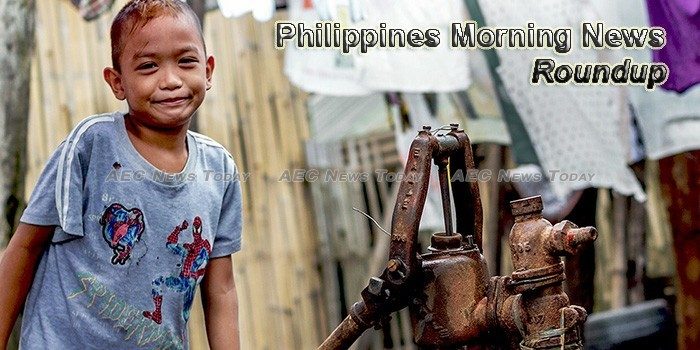 Sanofi may seek U.S. approval for Dengvaxia despite Philippines outrage
Sanofi will decide shortly whether to seek regulatory approval for its dengue vaccine Dengvaxia in the United States and remains committed to the medicine despite a health scare in the Philippines, a senior executive said on Wednesday.
— Reuters

House minority leaders back move to probe alleged 2016 poll anomalies
Minority leaders of the House of Representatives on Wednesday backed the move of Senate Majority Leader Vicente Sotto III seeking a probe into alleged irregularities in the 2016 national elections.
— Inquirer.net

ICTSI posts $182-million profit in 2017
EARNINGS of International Container Terminal Services, Inc. (ICTSI) were flat in 2017, as higher interest and financing charges alongside losses from operations in Colombia tempered the rise in revenues.
— BusinessWorld Online

Jobless rate down but underemployment rises
Fewer Filipinos were jobless at the start of the year but the number of those looking for more work also increased, the government reported on Wednesday.
— The Manila Times

Women in the time of Duterte
Philippine President Rodrigo Duterte has been making global headlines about his portrayal of women in public speeches and interviews. This has caught the attention of women’s rights groups that have called the president out for his unswerving misogynistic and sexist remarks.
— UCA News

Pilipinas Shell gets P9-B loan
PILIPINAS SHELL Petroleum Corp. has entered into a P9-billion medium-term loan agreement with Bank of the Philippine Islands, the company told the stock exchange on Wednesday.
— BusinessWorld Online

Duterte sets conditions for lifting of OFW deployment ban to Kuwait
The deployment ban of Filipino workers to Kuwait would remain in effect until certain conditions on additional protection for workers are met, President Duterte bared on Tuesday.
— Manila Bulletin

PH tops 35 countries in Women in Business 2018
The Philippines ranked first among 35 countries where 46.58 percent of Filipino women in business hold senior management roles or 22.44 percent more than the global average, according to Grant Thornton International Ltd.’s Women in Business report.
— Manila Bulletin