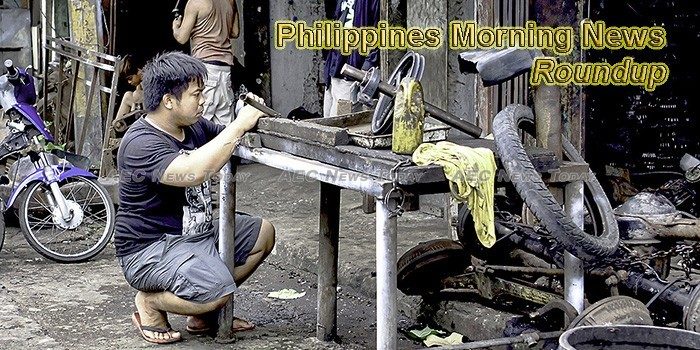 RTWPB 6 hikes West Visayas wages by as much as P41.50
The Regional Tripartite Wages and Productivity Board (RTWPB) of Western Visayas has approved an increase of P13.50 to P41.50 in the daily minimum wage of private-sector workers in the region.
— Business Mirror

Net exports to hit $120B in 2022
Net exports of Philippine goods and services are expected to hit $122 billion to $130 billion by 2022, growing at least 8 to 9 percent compounded annually over the next four years to achieve the low-end of the target.
— Malaya

City turns over P3.3-M vehicles for food aid
THE city Government of Davao turned over P3.3 million worth of vehicles to barangays for faster delivery of food assistance to communities, especially in times of disasters and emergencies.
— Sun Star

1.29K jobseekers join Independence Day fair in Luneta
Despite the continuous rains, more than 1,200 applicants registered for the 2018 Independence Day job and business fair at the Luneta Park here, the Department of Labor and Employment said on Tuesday.
— Philippine News Agency

Thailand ready to supply PH sugar requirements
Thailand, the world’s second largest sugar exporter, is hoping to bag most of the deals to supply the Philippines with cheaper, imported sugar.
— Manila Bulletin

Dole turns over P2 million livelihood at Kalayaan activity in Bacolod
ASIDE from the annual job fair, the Department of Labor and Employment (Dole) in Western Visayas is turning over today P2 million worth of livelihood projects to various beneficiaries in the province.
— Sun Star

Philippines women’s march tells Duterte ‘enough’
More than 1,000 women marched in Manila on Tuesday to tell President Rodrigo Duterte they have had enough of what they termed his repeated misogynistic words and deeds.
— Arab Times

Flood damage would double without coral reefs; PHL at risk —study
oss of coral reefs around the world would double the damage from coastal flooding, and triple the destruction caused by storm surges, researchers said Tuesday.
— GMA News

Gov’t eyes imports to stabilize prices
The country’s agriculture chief has issued a warning to “market speculators” to stop using the new tax law to increase prices in the market, adding that he would not hesitate to resort to importation to stabilize prices.
— Philippine Daily Inquirer

P23.5B for CALAX seen ready by end-July
THE Metro Pacific group is hoping to close the fund-raising for the construction of the Cavite-Laguna Expressway (CALAX) by next month.
— BusinessWorld Online

Solon allays foreign debt trap fears amid ‘BBB’ infra build up
PARTY-LIST Rep. Lito Atienza of Buhay on Independence Day allayed fears that the Philippines might get entangled in a foreign debt trap, as the Duterte administration embarks on an P8-trillion economic infrastructure-spending program dubbed as “Build, Build, Build” (BBB) program to make up for a massive backlog.
— Business Mirror

The Philippines: From independence to economic powerhouse
Emilio Aguinaldo was only 19-years-old when he issued a decree on 12 June, 1898 declaring the independence of the Philippines from Spain.
— The Asean Post

PH should be ready for global trade war
A global trade war could provide some upsides for the Philippines but the country will still need to prepare for the fallout, a government official said.
— The Manila Times

78% of Pinoys satisfied with democracy
About 78 percent of adult Filipinos are satisfied with the way democracy works in the country, while 60 percent prefer democracy to other forms of government, according to Social Weather Stations (SWS) surveys, the results of which were released Tuesday, Independence Day.
— Philippines Magazine

China to punish Coast Guard members in spat with PH fishermen – envoy
Chinese Ambassador to the Philippines Zhao Jianhua assured Tuesday that members of his country’s coast guard who take some of the catch of Filipino fishermen around the disputed Scarborough Shoal would be punished.
— CNN Philippines

Japan still PH’s top ODA source
Japan remains as the top fund source of official development assistance (ODA) to the Philippines, accounting for at least 37.14 percent of ODA loans and grants in 2017, data from the National Economic and Development Authority (NEDA) showed.
— Malaya