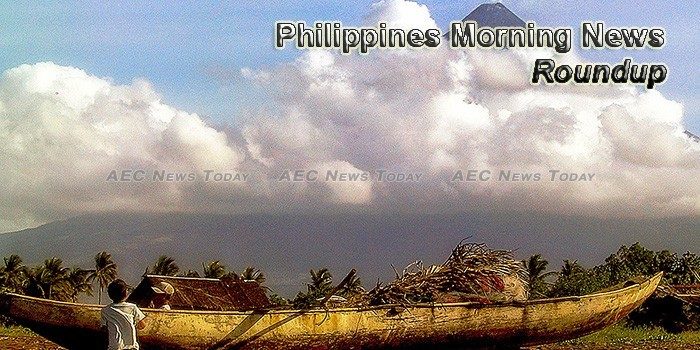 PSEi gains 1.09%, closes near 8,600
The local stock barometer rallied back to nearly 8,600 yesterday as local bargain-hunters were emboldened by the upbeat trading in Wall Street ahead of the first public statement from the new US Federal Reserve chief Jerome Powell.
— Philippine Daily Inquirer

Peso slumps to P52.03 against US dollar despite BSP’s efforts to manage volatility
The local currency plunged back to the P52-$1 territory on Tuesday, despite the recent statements made by Bangko Sentral ng Pilipinas (BSP) Governor Nestor A. Espenilla Jr. that the Central Bank will sell its dollar reserves to manage excessive peso volatility and calm the markets.
— Business Mirror

Philippine government to support banana exports to Australia
The Department of Agriculture has promised to help facilitate the entry of Philippine bananas onto the Australian market, which has been closed to Filipino exporters for more than two decades. Secretary Emmanuel F. Piñol said he would be willing to broker a meeting between Filipino banana exporters belonging to the Pilipino Banana Growers and Exporters Association and Australian officials.
— Fresh Plaza

Megaworld hikes capex for Westside City project in Parañaque to P121 B
Megaworld Corporation, the country’s largest developer of integrated urban townships, is increasing to P121 billion the planned investments of the Andrew Tan group in the 31-hectare Westside City at the Entertainment City in Parañaque City.
— Manila Bulletin

NCRPO gets P3.6-million aid from Pagcor
The National Capital Region Police Office (NCRPO) has received P3.6 million in financial aid from the Philippine Amusement and Gaming Corp. (PAGCOR) for the purchase of motorcycles to boost its anti-crime campaign.
— Philippine Star

Manila open to UN drug war probe by credible, objective investigator
The Philippines will allow an investigation into alleged human rights abuse in its bloody war on drugs, but not if it is conducted by the United Nations’current special rapporteur on extrajudicial killings, a senior official said yesterday.
— The New Paper

Philippines to ‘add sweeteners’ in guidelines for 3rd telco auction
The government is no longer requiring interested bidders to have a minimum net worth of P10 billion. Instead, it plans to award the 3rd telco slot to the participant with the ‘highest committed level of service.’
— Rappler

Shell sees shortage of LNG supply by 2020
Energy giant Royal Dutch Shell is expecting a shortage in the supply of liquefied natural gas by 2020 as global demand is expected to increase, based on its latest annual LNG Outlook.
— Philippine Star

Survey: More jobs expected in 2018
A robust job market ahead for the Philippines as more companies seek to expand their work force. This, according to a survey conducted by online job portal Jobstreet.
— ABS-CBN (video)

‘Abused, starved’ maid dies 4 days after returning to Cebu
A Filipino domestic worker allegedly abused by her employers in Saudi Arabia has died four days after flying home to Cebu in the Philippines.
— Asia Times

LTO 7 wants P739M for 2019 projects
THE Infrastructure Development Committee of the Regional Development Council approved P739.1 million worth of plans and programs for the Land Transportation Office (LTO) 7, a necessary step for that item to be included in the 2019 budget.
— Sun Star

PH gov’t posts 13% rise in revenues in ‘17
The Duterte administration registered an 11 percent improvement on expenditures in 2017 but budget deficit fell 1 percent on account of the 13 percent year-on-year rise in revenues.
— Philippine News Agency