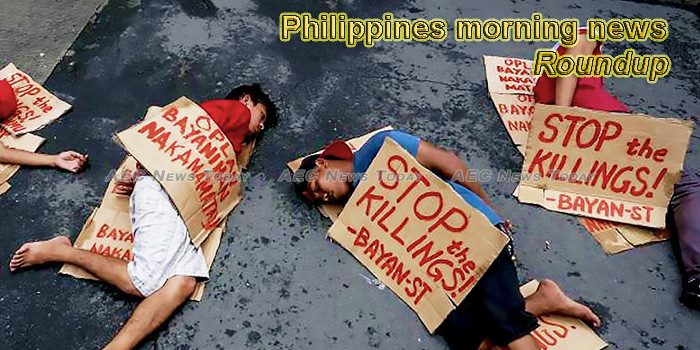 Hot money seen to end ‘18 with net outlfow of $100 million
The Bangko Sentral ng Pilipinas said it expects foreign portfolio investments or hot money to end with a $100-million net outflow in 2018, lower than the shortfall of $800 million in 2017.
— Manilastandard.net

Remittances to hit past $31-B this year —solon
Remittances from overseas Filipinos are expected to hit more than $31 billion this year, Representative Henry Ong said, citing figures from the Bangko Sentral ng Pilipinas.
— GMA News

Round 2 of fuel tax hike only for new stocks: Energy dept
The second round of increase in excise taxes on fuel will apply only to new stocks that are expected to retail from Jan. 15, the Department of Energy said Wednesday.
— ABS-CBN News (video)

Philippines to continue incurring CA deficit, says Fitch Ratings
The country may experience wider current account (CA) deficits in the next two years due to strong capital goods imports and a sharp slowdown in exports, according to Fitch Ratings.
— The Philippine Star

Metro Manila to kick off construction of P350-B subway in January
The Department of Transportation (DOTr) is set to hold the groundbreaking event for its P350-billion subway project in Metro Manila by next month.
— Philippine Daily Inquirer

Davao City’s contractual workers to get above P10,000 salary in 2019
CONTRACTUAL workers of the Davao City government, currently receiving an average of P7,400 a month, are getting a salary increase in 2019 with the approval of next year’s P8.8 billion budget.
— BusinessWorld Online

Consumer groups exhort govt to oversee third telco system
A NETWORK of consumer groups has urged the Duterte administration to take charge of the operations of third telecommunications system instead of a private entity to ensure affordable and quality service.
— Business Mirror

CPP marks founding anniversary amid military offensives
The Communist Party of the Philippines (CPP) celebrated its 50th founding anniversary on Wednesday in small groups and scattered areas to avoid the military’s relentless and intensified counterinsurgency operations, a spokesperson said.
— Inquirer.net

More Philippines firms shift to Chinese yuan
The demand for Chinese yuan or renminbi (RMB) among Philippine companies is increasing amid improving economic relations between Manila and Beijing.
— The Philippine Star

Production spurred by infrastructure build expected to propel Philippines up ranks of biggest economies
THE PHILIPPINES can be expected to close in on the top 10% of the world’s major economies in the next 15 years, partly as improved infrastructure spurs overall economic growth, according to a London-based consultancy.
— BusinessWorld Online

Cement imports imperil 42,000 Filipino jobs
Local cement manufacturers are poised to employ some 400,000 Filipinos, directly and indirectly, by 2030 should a favorable business environment and enough government support allow them to sustain growth.
— The Philippine Star

Duterte raises bounty for solon’s killers to P50M
President Rodrigo Duterte raised the bounty for the killers of Ako Bicol Rep. Rodel M. Batocabe during his visit to the slain lawmaker’s wake in this city Wednesday evening.
— Inquirer.net

DOLE sets signing of Manila-Moscow OFW pact in March
THE Department of Labor and Employment (DOLE) will forge a new bilateral labor agreement (BLA) with Russia early next year to safeguard the welfare of skilled overseas Filipino workers (OFWs) there.
— Business Mirror

12 truckloads of trash hauled from Rizal Park
At least 12 truckloads of garbage left by families who celebrated Christmas in Rizal Park were collected from the popular tourist destination in Manila, officials said yesterday.
— The Philippine Star