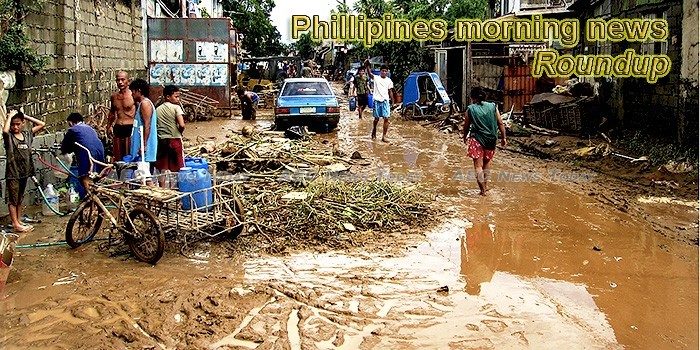 New Murder Case against Philippine Leader Filed before ICC
A rights group and relatives of eight victims killed in President Rodrigo Duterte’s unrelenting drug war filed a murder case Tuesday against the Philippine leader at the International Criminal Court (ICC), in the second such petition alleging thousands had been killed in the anti-narcotics campaign, their lawyer said.
— Benar News

House to pass P3.7-T budget in Oct
The House of Representatives will approve the proposed P3.757-trillion budget for 2019 on third and final reading on October 12, Majority Leader Rolando Andaya Jr. said on Tuesday.
— The Manila Times

Banks show bigger returns in Q2 despite slower asset growth
THE COUNTRY’s biggest banks were more profitable in the second quarter even as growth in assets slowed and their capacity to absorb risky assets dipped.
— BusinessWorld Online

One killed, dozens wounded in Philippines bombing
A bomb blast tore through a crowd at a festival in the southern Philippines on Tuesday, killing one person and wounding dozens more in the second deadly attack in under a month in the region, authorities said.
— The Business Times

Lawmakers sound alarm on ‘massive cuts’ in education budget
Lawmakers raised concern Tuesday over what they call “massive cuts” in the proposed 2019 budget of the Department of Education (DepEd).
— ABS-CBN

Gov’t lines up priority infrastructure for 2019
THE CURRENT ADMINISTRATION has lined up the start of P36.23 billion worth of large-scale flood control, road and railway projects next year, which marks the midterm of President Rodrigo R. Duterte.
— BusinessWorld Online

Tariff on rice to curb inflation by 0.4 percentage point
If passed into law this year, the plan to slap a 35-percent tariff on imported rice and removing the import quota will reduce the inflation rate by up to 0.4 percentage point, Bangko Sentral ng Pilipinas Governor Nestor A. Espenilla Jr. said Tuesday.
— Philippine Daily Inquirer

DTI releases livelihood fund for Boracay MSMEs
The Small Business (SB) Corp., the financing arm of the Department of Trade and Industry (DTI), has released some PHP210,000 worth of loans to micro entrepreneurs on Boracay Island as of August 24.
— Philippine News Agency

Producers to freeze prices for 3 months
The Department of Trade and Industry (DTI) said manufacturers have agreed in principle to hold off any increases in the suggested retail prices (SRPs) of basic and prime commodities for the next three months or until the end of the year.
— Malaya

Jeepney operators in Normin to receive P5,000 fuel subsidy from LTFRB
The national government has allocated P28 million that will benefit operators of more than 5,000 public utility jeepney (PUJ) units in Northern Mindanao under the Pantawid Pasada Program (PPP) of the government, according to the Land Transportation Franchising and Regulatory Board-10 (LTFRB-10) on Tuesday, Aug. 28.
— Davao Today

BIR losses P46M in careless assessment
The Court of Tax Appeals (CTA) has upheld the petition of a merchandising company protesting the more than P46 million deficiency tax assessment imposed by the Bureau of Internal Revenue (BIR) for the latter’s failure to include in the assessment notice the due date of the payment.
— Manila Bulletin

PAL announces flights to be affected by Cebu airport runway’s repair
Some flights of the Philippine Airlines from and to Cebu will either be delayed or cancelled from Sept. 1 to 21, the flag carrier announced on Tuesday afternoon.
— Philippine News Agency

New DOT ‘More Fun’ campaign to get P500 million
THE Department of Tourism (DOT) will be refreshing its “It’s More Fun in the Philippines” brand campaign with a new series of ads here and abroad at a cost of P500 million.
— Business Mirror

Gov’t eyes setting carrying capacity for other PH destinations
After Boracay, the Department of Tourism (DOT) seeks to limit visitors entering other tourist destinations in the country for “sustainable tourism”.
— Philippine News Agency

House approves on 2nd reading bill granting 100-day maternity leave
The House of Representatives on Tuesday, August 28, passed on second reading a measure that seeks to grant a 100-day paid maternity leave to both government and private sector workers.
— Rappler

House, budget officials agree to restore some cuts for 2019
The House of Representatives and budget officials have agreed to restore cuts on appropriations for the Health, Education, and Public Works and Highways departments for 2019, House Majority Leader Nonoy Andaya said Tuesday.
— CNN Philippines

Batanes out of rice; government to distribute smuggled rice
The Ivatans, residents of the northernmost region in the country, are running out of rice and food supplies following the spate of bad weather in the area.
— The Philippine Star

3 dams near critical spill levels
Despite the early exit of Typhoon “Luis” over the weekend, the water levels of the three dams in the province of Bulacan have almost reached its critical spilling level or flood season high water level.
— Manilastandard.net

Ecozone developers nix tax cuts under TRAIN 2
The enactment of the second package of the Tax Reform for Acceleration and Inclusion (TRAIN) poses a threat to the influx of foreign direct investments (FDIs) in special economic zones, an industry group said.
— The Philippine Star

Govt committed to deficit targets
The government is not planning to embark on a spending blowout amid uncertainties over pending tax reform proposals, economic managers said on Tuesday.
— The Manila Times

MetroPac, DOTr agree to drop arbitration case
The Transportation Department and Metro Pacific Tollways Corp. are open to an out-of-court settlement over a multibillion-peso compensation claim, stemming from the government’s refusal to approve toll adjustments since 2011.
— Manilastandard.net

Grab: LTFRB needs to add 15,500 more drivers to TNVS
THE Land Transportation Franchising and Regulatory Board (LTFRB) should add about 23 percent more slots into the so-called common base supply of transportation network vehicle service (TNVS) operators to match the demand for ride-hailing services in the Philippines.
— Business Mirror

Quick tips on how you can save your mobile data
It’s expensive to have unlimited mobile data. As much as Filipinos are an internet-loving bunch that would browse anytime, anywhere and even more so during rush hour traffic, it’s just impractical and costly.
— Inquirer.net