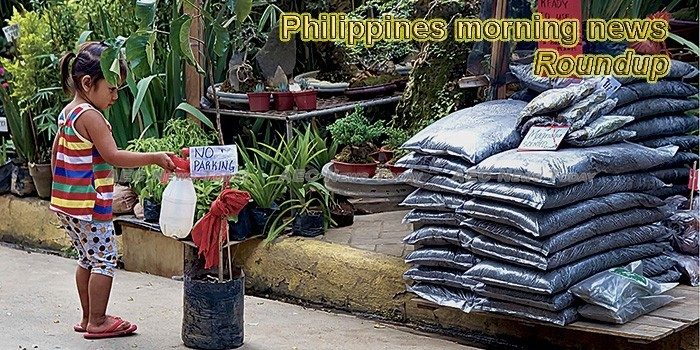 There will be a new 2019 budget – House
Malacañang and the House of Representatives are finally on the same page insofar as the 2019 budget scheme is concerned.
— CNN Philippines

GOCC dividends at P32.03B in Jan.-July, exceeding P27.3B in 2017
GOVERNMENT-OWNED and Controlled Corporations (GOCCs) have remitted a total of P32.03 billion this year to the National Government, the Department of Finance said in a briefer on Wednesday, Aug. 15, marking 2018 GOCC Day.
— BusinessWorld Online

Asian Games 2018: P5 M for gold medalist
A gold medalist in the Indonesia Asian Games stands to receive a whopping P5 million after the Siklab Atleta Pilipinas Sports Foundation dangled P1 million to go with the P2-million incentive from the government and another P2 million from the Philippine Olympic Committee (POC).
— Manila Bulletin

PH to import 17K MT of galunggong
Emmanuel Piñol, secretary of the Department of Agriculture (DA), has signed the certificate of necessity that would authorize the importation of up 17,000 metric tons of roundscad (galunggong) to be sold in wet markets.
— Malaya

Villar pushes for P10-billion rice farmers’ subsidy
Senate agriculture and food committee chairperson Cynthia Villar is pushing for a P10-billion subsidy for local rice farmers along with the proposal to lift import quotas and slap tariffs on rice imports.
— Rappler

US, UK warn of kidnapping threat in Philippines
The American and British embassies in Manila warned their citizens Tuesday about kidnapping threats in Palawan province, citing information from local authorities.
— Brinkwire (media release)

Economic team seen to fast-track approval of Japan loan for MRT 3 rehab
To fast-track the planned rehabilitation of the dilapidated Metro Rail Transit (MRT) Line 3, economic managers will meet today to discuss and possibly green-light the up to 38.1-billion yen (about P18.3 billion) loan offered by Japan for the project.
— Philippine Daily Inquirer

DA gets lower budget of P10 B for farm-to-market road projects
Despite its own perceived improvement in the way it spends its yearly budget, the Department of Agriculture (DA) still failed to convince the Department of Budget and Management (DBM) of its capacity to fully utilize its funds.
— Manila Bulletin

Rice, corn output lower in Q2 – PSA
THE Philippines’ rice and corn production likely dropped in the second quarter of 2018 because fewer fields were planted with the crops, the Philippine Statistics Authority (PSA) said on Wednesday.
— The Manila Times

Smart, Ericsson join to deploy 5G in PH
Smart Communications, Inc. (Smart) and Ericsson have signed a Memorandum of Understanding (MoU) to deploy the country’s first 5G pilot network by the first half of 2019.
— Manila Bulletin

Dominguez sees economy growing faster in second half
Finance Secretary Carlos Dominguez III, the head of the economic team, said Wednesday the economy will strongly recover in the second half, after growing 6.3 percent in the first semester, or below the official target range of 7 percent to 8 percent.
— Manilastandard.net

Chelsea to assume ‘bigger role’ in moving Philippine economy with expanded fleet
SHIPPING and logistics company Chelsea Logistics Holdings Corp. (CLC) is “harnessing” the opportunities trade growth brings within and outside the Philippines, vowing to have a “bigger role in moving the economy” with its expanded fleet.
— Business Mirror

Reduced budgets for social services, enterprises assailed
Whether it’s cash-based or obligation-based, the Makabayan bloc of party-list congressmen in the House of Representatives is rejecting President Rodrigo Duterte’s P3.76-trillion budget for 2019 because of the huge cuts in the appropriations for social services and productive enterprises.
— Philippine Daily Inquirer

DILG to probe funding for ‘ghost villages’
THE Department of the Interior and Local Government will investigate the alleged anomalous payment by the city government of Manila of real property tax shares totaling P108.733 million to 27 non-existent barangay (villages).
— The Manila Times

Death penalty will be ‘big help’ to anti-drug campaign – DILG Chief
The passage of the death penalty would help the government win the so-called war against illegal drugs, Department of the Interior and Local Government (DILG) Officer-in-Charge Eduardo Año said on Wednesday, August 15.
— Rappler

Albayalde: Cops involved in Kian delos Santos slay now in jail
All policemen involved in the killing of 17-year-old Kian Lloyd delos Santos last year have been dismissed from service and are currently in jail, the head of the Philippine National Police (PNP) said.
— CNN Philippines

Why is the Philippines lagging behind in Asean?
My last piece on how the Philippines remains the tailender among the five original Asean members – and now even including Vietnam – begs the question, why?
— The Nation

Vietnam morning news for May 19