By Maria Mirasol Rasonable on September 19, 2018 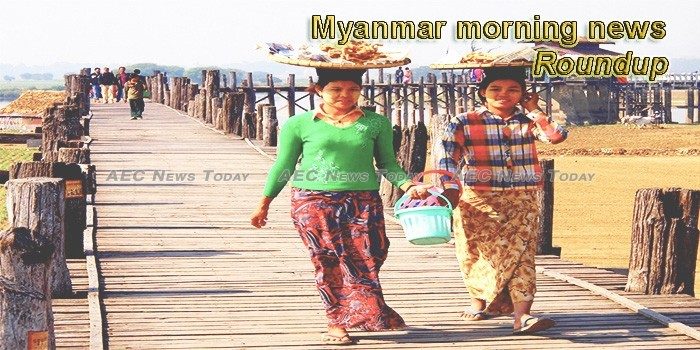 Democratic transition in Myanmar ‘at standstill’: U.N. rights panel
Myanmar’s democratic transition has ground to a standstill as authorities seek to silence critics while allowing hate speech, particularly against Muslim Rohingya, the head of the U.N. human rights mission said on Tuesday.
— Reuters

‘Genocidal’ Myanmar army must leave politics: UN probe (video)
Myanmar’s powerful army should be removed from politics, UN investigators said Tuesday in the final version of a damning report reiterating calls for top generals to be prosecuted for genocide against the Rohingya Muslim minority.
— Bangkok Post

War crimes prosecutor begins examining alleged Rohingya deportations
The prosecutor of the International Criminal Court on Tuesday said her office had begun a preliminary examination into whether alleged forced deportations of Rohingya from Myanmar into Bangladesh could constitute war crimes or crimes against humanity.
— Reuters

UN reiterates call for Myanmar generals to face genocide charges
Myanmar’s powerful army should be removed from politics, UN investigators said Tuesday, as they released the final part of a damning report reiterating calls for top generals to be prosecuted for “genocide” against the Rohingya Muslim minority.
— Thai PBS

Security tight on Tak border after jailbreak in Myanmar
Security was tightened along the Thai-Myanmar border in this northern province on Tuesday following a jailbreak in Hpa-An, the capital of neighbouring Kayin State in Myanmar.
— Bangkok Post

The Myanmar generals accused of ‘genocide’
Myanmar’s powerful army should be removed from politics and the top generals should to be prosecuted for “genocide” against the Rohingya Muslim minority, says the final UN report.
— SBS News

India, Myanmar to Begin Using E-Visas Along Land Border
The Ministry of Labor, Immigration and Population and the Myanmar Embassy in India announced on Thursday that checkpoints along the India-Myanmar border will begin using e-visas for travel between the two countries.
— The Irrawaddy

Expert to meet Bagan people, study bid for heritage listing
An expert from the International Council on Monuments and Sites will meet this week with local residents to evaluate the country’s application to list the Bagan cultural zone as an international heritage site.
— Myanmar Times

UN Report on Rohingya Crisis Calls For Removal of Myanmar Military From Politics
A United Nations fact-finding mission that investigated atrocities committed against Rohingya Muslims in Myanmar’s Rakhine state issued a report on Tuesday detailing violence by security forces and calling for the prosecution of top military commanders as well as the removal of the country’s powerful Tatmadaw (military) from politics.
— Radio Free Asia

Leaders of Two Koreas Meet in Pyongyang for Talks on Ending War
North Korean’s Kim Jong Un greeted Moon Jae-in with hugs and smiles on Tuesday as the South Korean president arrived in Pyongyang to discuss faltering talks on denuclearization and the prospect of officially ending the Korean War.
— The Irrawaddy

Farmers unhappy about onion price hike when low stock
When the onion enters markets in the Pakkoku region, from May to end of August, the highest price of one viss of onion may only reach up to Ks600 wherelse in September, when there is little to no stock left with the onion producers, the price is higher.
— Eleven Myanmar

Bangladesh to move Rohingya to island from next month: officials
Bangladesh will next month start moving 100,000 Rohingya refugees to a remote island, officials said Tuesday, despite warnings the silty strip is prone to violent weather.
— Frontier Myanmar

Tatmadaw’s LIB-539 runs rock quarry on land released by Ministry of Defence
Although the Ministry of Defence has released 120 acres of land that belongs to the residents of Pyaung Seik, Pyaing Chaung, and Oke Taung Pyin villages under Kyauktaw Township, Rakhine State, it still has not been returned to the original owners and the Tatmadaw’s 539th Light Infantry Battalion (LIB-539) has been running a rock quarry on the land, local farmers said.
— BNI

Thousands Demonstrate in Namkham for Release of TNLA Detainee
More than 20,000 people gathered for a peaceful protest in Namkham, northern Shan State, on Monday morning calling for the immediate release of a woman who has been held by the Ta’ang National Liberation Army (TNLA) for one month.
— BNI

Genocide and the moral crisis gripping Asean
Just 20 days after Asean celebrated its 51st anniversary, the United Nations Independent International Fact-Finding Mission on Myanmar reported on August 28 that genocide and other atrocities had been committed by the military in Kachin, Rakhine and Shan states.
— The Nation

UN panel’s report calls for Tatmadaw to be restructured and its leadership replaced
A United Nations panel that investigated “horrifying” human rights violations in Rakhine, Kachin and Shan states has called for the restructuring of the Tatmadaw, including replacing its current leadership.
— Frontier Myanmar

Media Report from 2018 World Peace Summit: Peace advocates asks youths and women to maintain peace and extends peace education
2018 World Peace Summit continues on the second day, on September 17, in Inchoen, the peace advocates asked the youths and women were key persons in the communities to maintain peace, and gave the peace as legacy to their new generations along with providing peace education in schools and communities.
— BNI

Thailand Morning News For May 25