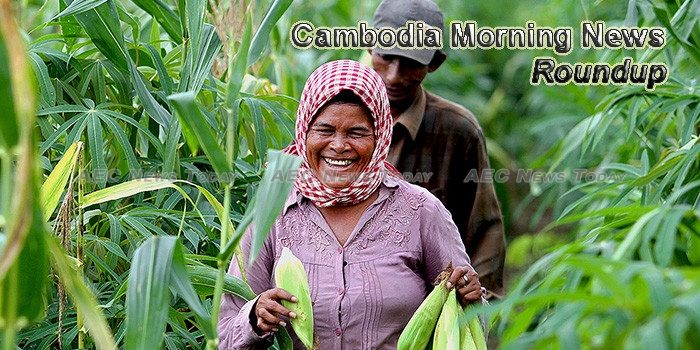 Government announces lower price cap amid oil rally
The government announced yesterday that it is lowering the price cap on petrol and diesel sold at retail petrol stations across the Kingdom effective today through October 21 in an effort to reflect changes in global oil prices.
— The Phnom Penh Post

Tax rate cut for tobacco, alcohol distributors
The government has offered local distributors of cigarettes and alcohol some slack by reducing the tax obligation on secondary distribution of their products.
— The Phnom Penh Post

Vietnam asks ‘migrants’ rights be respected
The Vietnamese Ministry of Foreign Affairs responded on Tuesday to reports that Cambodia plans to revoke documents from thousands of ethnic Vietnamese, urging the Kingdom to respect legal rights during the process.
— The Phnom Penh Post

Cambodia’s Hun Sen Calls For Unity Against ‘Great Power’ Interference
Cambodia’s Prime Minister Hun Sen called on Wednesday for the Cambodian people to “stand up” against what he called meddling in the country’s internal affairs by the United States and other nations, urging citizens to unite in defense of Cambodia’s sovereignty.
— Radio Free Asia

Pi Pay links to first bank in step towards fully cashless platform
Mobile payment platform Pi Pay announced yesterday that it has signed an agreement with ABA Bank that allows the bank’s customers to seamlessly transfer money between their mobile wallet and ABA accounts, a move the company describes as a milestone toward creating Cambodia’s first fully cashless digital wallet not tied to a specific bank.
— The Phnom Penh Post

Hun Sen spins demise of CNRP into boon for democracy
Prime Minister Hun Sen yesterday embraced a proposal to redistribute the Cambodia National Rescue Party’s National Assembly seats “when” – not if – the party is dissolved, while praising the solution as a boon for democracy.
— The Phnom Penh Post

Workshop launched to assess WTO programme
The Ministry of Commerce yesterday launched a two-day workshop examining the effectiveness of the implementation of the WTO’s Enhanced Integrated Framework (EIF) that includes its Cambodia Export Diversification and Expansion Programme II (CEDEP II) that began in 2014 and will end next year.
— The Phnom Penh Post

Phnom Penh to host Asian taekwondo festival
Cambodia has been given the hosting rights for the annual Asia Kukkiwon Taekwondo Festival in the first week of December this year by the Seoul-based World Taekwondo Headquarters, the sport’s official governing body established by the South Korean government.
— The Phnom Penh Post

Cambodian Reading Clubs Promote Female Friendships
International Day of the Girl is a day declared by the United Nations to “help galvanize worldwide enthusiasm for goals to better girls’ lives, providing an opportunity for them to show leadership and reach their full potential.” Equal rights, access to education, and overall empowerment for girls around the world is the focus of the HerStory Campaign.
— Teen Vogue

Kingsman banned for portraying temple as hideout for film’s villains
Cinemagoers, be warned: the blockbuster sequel Kingsman: The Golden Circle won’t be playing in a theatre near you after all, with government officials yanking the action flick from the Kingdom’s screens over an allegedly negative portrayal of Cambodia deemed unacceptable for local audiences.
— The Phnom Penh Post