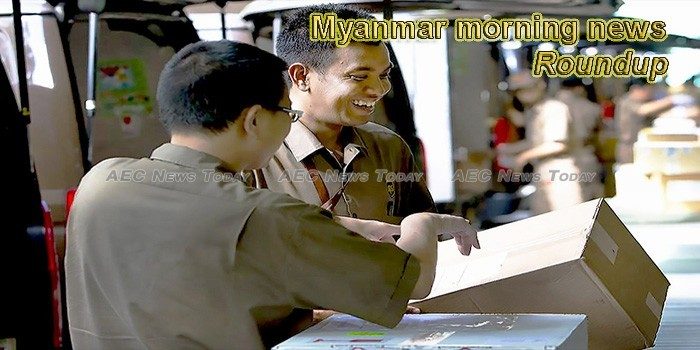 Rohingya plight: 12 families shifted to camp in N-24 pgns
Amid a global outcry over the Rohingya crisis, around 12 such families who recently took shelter at Sonakhali village under Haringhata police station limits in Nadia have been shifted to a camp in North 24 Parganas.
— The Stateman

Myanmar: Christians Forced to Sign Papers Vowing Not to Pray in Church, Curb Their Faith
Hundreds of minority Christians in Myanmar are being forced to sign papers vowing to limit their faith and not pray in churches, pastors have warned.
— Christian Post

Japan and Mekong nations of Cambodia, Laos, Myanmar, Thailand, and Vietnam to strengthen ties
Japan and five nations connected to the Mekong Delta have agreed to strengthen ties throughout this important geopolitical region. Once more, for Myanmar, it highlights that this nation isn’t isolated throughout Asia and further afield despite Western and Islamic pressure.
— Modern Tokyo Times

Target the Generals, Not “The Lady”
The Foundation announced this month that it will not withdraw its 1991 Peace Prize award to Aung San Suu Kyi, despite the stampede by other groups to cancel the honors that they heaped on her when she was campaigning for democracy in Myanmar.
— The American Interest

Criticism of Govt: Myanmar cops arrest three journalists
Myanmar police Wednesday arrested three journalists after their paper criticised the financial management of Yangon’s government, which is overseen by a protege of leader Aung San Suu Kyi, in the latest case to spark concern over press freedom.
— The Daily Star

New digital tax collection system to launch next year
Government is amending the tax laws to be clear as well as going to use IT technology for taxpayers to pay tax easily.
— Myanmar Times

Rohingya teen dreams of higher ed from squalid refugee camp
From the refugee camp in southern Bangladesh where she was born, Akter, a 19-year-old with a confident smile who goes by the name Khushi, says she aspires to become the most educated Rohingya woman in the world.
— Messenger-Inquirer

Japan and Mekong nations of Cambodia, Laos, Myanmar, Thailand, and Vietnam to strengthen ties
Japan and five nations connected to the Mekong Delta have agreed to strengthen ties throughout this important geopolitical region. Once more, for Myanmar, it highlights that this nation isn’t isolated throughout Asia and further afield despite Western and Islamic pressure.
— Modern Tokyo Times

3 critics of Suu Kyi protégé nabbed
Myanmar police Wednesday arrested three journalists after their paper criticized the financial management of Yangon’s government, which is overseen by a protege of leader Aung San Suu Kyi, in the latest case to spark concern over press freedom.
— The Manila Times

Amata Holding to deploy Bell helicopters in Mergui
Tourism and hotels company Amata Holding Public Co Ltd is in negotiations with representatives of an American aviation company for a deal that could bring helicopter transportation and sea plane flights to the Mergui archipelago in Kawthaung, Tanintharyi Region in the south of Myanmar.
— Myanmar Times

Growth ahead for MTSH, COO’s resignation not related to AGM
Myanmar Thilawa SEZ Holdings Public Ltd (MTSH), one of the five companies listed on the Yangon Stock Exchange (YSX), has been under the spotlight after tensions between the company’s board of directors and shareholders erupted at its fifth Annual General Meeting (AGM) on September 29.
— Myanmar Times

Armed Groups Agree to Join Peace Summit
Ethnic armed groups meeting in Thailand this week have agreed to join a summit with Myanmar’s state counselor and military chief aimed at reviving the country’s stalled peace process after convincing them to change the venue.
— The Irrawaddy

Support arrives for Myanmar’s traditional textile sector
Three international organisations will invest more than US$ 750,000 in Myanmar’s textile industry over the next two years.
— Myanmar Times

Three Arakanese Youth Activists Held in Rakhine
Three Arakanese, one from the Arakan National Party (ANP) and two township representatives of the Arakan Youth Conference (AYC), have been arrested by Sittwe police.
— The Irrawaddy

BPI medicines worth over K36 bn sold last fiscal year
K36.942 billion worth’s of BPI medicines were sold in 2017-2018 fiscal year with most purchased from the Ministry of Health and Sports, according to Myanma Pharmaceutical Industries.
— Eleven Myanmar

US Says China Spy Charged with Trying to Steal Aviation Secrets
The US Justice Department said on Wednesday it had arrested and indicted a spy for China’s Ministry of State Security on charges of economic espionage and attempting to steal trade secrets from several US aviation and aerospace companies.
— The Irrawaddy

Another Rakhine youth arrested in Sittwe
An eye witness told Narinjara News that she saw the police arresting Ko May Yu Tun in front of Lawkanandar Pagoda in Sittwe after 11 am yesterday.
— BNI

Truck drivers block Strand Road in protest over operating hours
About 200 truck drivers attempted to block a section of Strand Road last night as part of a protest against limiting their hours of operation.
— Frontier Myanmar

Family of Shan Detainee Sentenced by TNLA: ‘They Didn’t Inform Us’
Nang Mo Hom was sentenced to three years in TNLA custody for allegedly violating their criminal code.
— BNI

Myanmar Launches First Inquiry into Agricultural Chemicals and Their Effects
The Upper House of Parliament’s agriculture committee has launched its very first parliamentary inquiry into chemicals used in agriculture and their effects on the health and quality of life of farmers, workers and consumers across the country, according to the committee chair.
— The Irrawaddy

Chuncung residents oppose construction of dam in sacred lake in Mt. Zinghmuh without informing the public
Residents of Chuncung Village are preparing to stage a protest in the Chin State’s capital Hakha to object to the construction of a dam in Lai tili Lake as part of the development of Mt. Zinghmuh as a national park without informing the public.
— BNI