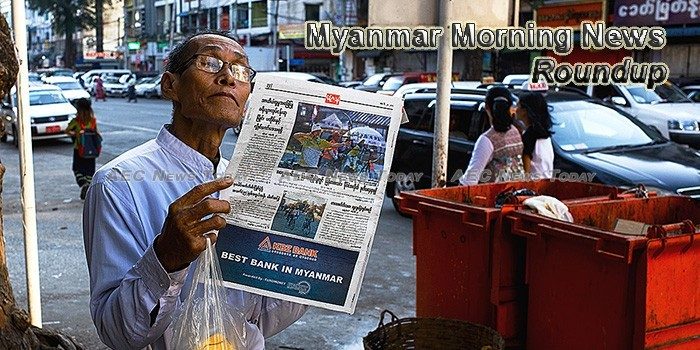 Singapore makes largest investments in real estate sector
Singapore made an investment of US$1.72 billion in 31 projects, as of the end of December, in the current fiscal year (FY), followed by China, with estimated investments worth more than $1.29 billion in 50 enterprises State media reported.
— Mizzima

Famous US company launches capacity-building training in Myanmar
Training based on self-improvement techniques developed by an American whose global best-seller was translated by former Prime Minister U Nu has celebrated its launch in Myanmar.Dale Carnegie Training, which was founded in 1912 and operates in 80 countries, launched at a Yangon hotel on Friday, it said in a news release.
— Frontier Myanmar

Hoarding drives pea prices up
Prices of pigeon peas have risen thanks to hoarders, according to merchants. Indian buyers have also been purchasing peas at the Pakokku wholesale market in Magway Region.Prices per bushel of the old harvest of pigeon peas rose from Ks11,500 to Ks12,500 and the new harvest from Ks9,000 to Ks10,500.
— Eleven Myanmar

Regional economy supported by India’s accelerated growth: PwC
Myanmar is set to represent one of the fast growing economies this year but it will be affected by India’s growth acceleration as well as the stability of the Chinese economy, according to PwC Growth Markets Centre.
— Myanmar Times

Index Creative Village to go digital in Myanmar expansion
Kreingkrai Kanjanapokin, founder and group CEO of Index, said in an exclusive interview that the firm would focus on its new lines of business – digital marketing and communications, in Myanmar this year. “Now everything is online, and you can get connected all the time. You cannot survive if you cannot create new things,” he said.
— Eleven Myanmar

TMH Telecom down 7.7pc on first week of listing
Shares of TMH Telecom Public Co. fell 7.7 percent in its first week of trading. The shares, which first traded on the Yangon Stock Exchange (YSX) on January 26 at K3,250 each, close Thursday at K3,100. More than 23,000 shares have exchanged hands so far this week.
— Myanmar Times

Bangladeshi loses legs as mine explodes on Myanmar border
A Bangladeshi farmer lost both legs when he stepped on a landmine reportedly planted by Myanmar security forces in a buffer zone between the two countries, officials said today.
— Business Standard

Diplomacy to resolve Rohingya crisis is on: B’desh
The Bangladesh government have been holding multilateral talks to have a permanent solution to the Rohingya crisis, said
Foreign Minister AH Mahmood Ali. The minister told the parliament on Sunday that the issue was taken up in the United Nations Security Council several times in line with diplomatic efforts of the government.
— Business Standard