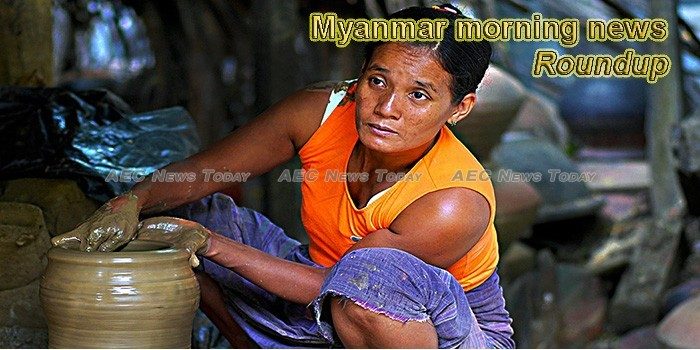 Myanmar asks Bangladesh to stop aid to stranded Rohingya
Rohingya stranded on the border between the two countries since a military crackdown prompted a mass exodus of the Muslim minority last year, the foreign ministry in Dhaka said.
— Bangkok Post

Dengue fever outbreak rate declines by half in Myanmar
The outbreak rate of dengue haemorrhagic fever (DHF) dropped by half in the first eight months of this year as of Aug. 4 compared with the same period of last year, the official Global New Light of Myanmar reported Sunday.
— Xinhuanet

The Military vs. Democracy 30 Years On
Welcome to Dateline Irrawaddy! Aug. 8 marked the 30th anniversary of the 8888 pro-democracy popular uprising.
— The Irrawaddy

ICC Rohingya probe ‘meritless’
Myanmar said that a request at the International Criminal Court (ICC) to probe the mass deportation of Rohingya Muslims from the country was “meritless” and should be rejected.
— The Asean Post

Villagers up in arms against cement factory construction
Residents of Aung Tha Pyay Village in Mandalay Region are restive and implacable. They do not want a coal-fired cement factory operating beside their houses.
— Myanmar Times

This Week in Parliament (Aug. 6-10)
e Lower House of Parliament passed a proposal to urge the government to keep companies true to their contracts after accusing the Construction Ministry of failing to adequately monitor firms it hires to build and maintain roads using the BOT — build, operate, transfer — system.
— The Irrawaddy

Through their own eyes: Displaced Kachin youth
A PHOTO storytelling project in northern Myanmar is training children and teenagers affected by conflict, natural disasters and socio-economic discrimination to express themselves through photography and writing.
— Frontier Myanmar

Wanted: A Vision of Myanmar’s Future
Almost five years have passed since Irrawaddy editor-in-chief Aung Zaw appealed for a national leader to stand up and articulate a bold and bright future for Myanmar. The country, however, has continued to stumble along, making that message as pertinent as ever.
— The Irrawaddy

Don to discuss Rakhine plans, air deal on Myanmar visit
Foreign Minister Don Pramudwinai will sign the Thailand-Myanmar Air Services Agreement and a memorandum of understanding (MoU) on the Project on the Development of Shrimp Culture in Rakhine State during his official visit to Nay Pyi Taw on Tuesday.
— Bangkok Post

Snr-Gen Min Aung Hlaing Ushers in Period Of Close Ties Between Myanmar And Thai Defence Forces
Relations between the Myanmar and Thai militaries have reached a new high during the tenure of Myanmar’s military chief Snr-Gen Min Aung Hlaing, according to a report published by a Yangon-based independent policy institute.
— The Irrawaddy