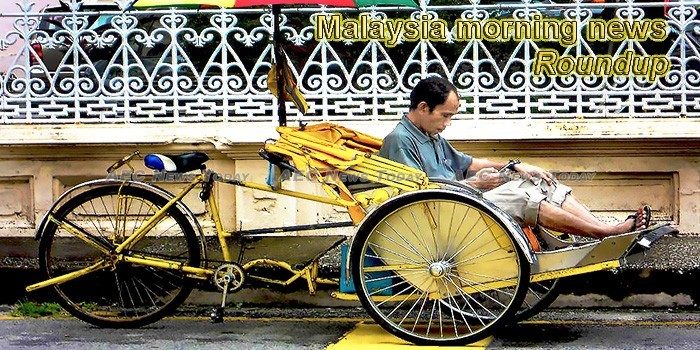 Malaysia’s free bus service not for foreigners
Foreigners have failed in their attempt to get free rides on the city’s complimentary bus service, which is provided for the locals.
— The Nation

M’sian banks hammard on various fronts, earnings growth lowered
The banking sector is not out of the woods yet, as analysts expect its performance for the year to be hammered on various fronts.
— The Star Online

Market volatility from trade dispute uncertainties expected to continue
Market volatility, due to trade dispute uncertainties and domestic fiscal concerns, will likely cause foreign funds to continue holding on to safe haven assets, especially in light of heightened concerns over the Turkish lira crisis and its contagion effects on emerging markets.
— The Borneo Post

Profit taking in palm oil market next week?
The crude palm oil (CPO) futures contract on Bursa Malaysia Derivatives is expected to see profit taking next week as oversupply concerns loom in line with the seasonal trend, said a dealer.
— The Star Online

Asia’s First New Hyper-Reality Star Wars(TM) VR Experience Coming to Resorts World Genting
From a galaxy far, far away comes the first multi-sensory immersive experience of its kind in Asia that blurs the line between the physical and virtual world that you can explore with friends and companions.
— AEC News Today/ PR Newswire (media release)

Malaysia To Begin Issuing Bauxite Ore Export Permits For Remaining Stockpiles
After languishing in place for almost 32 months, the Malaysian government has decided to give the go-ahead to bauxite mining firms to begin applying for approved permits (AP) allowing for export of the bauxite stockpiles left behind in Pahang.
— Aluminium Insider

Dr Mahathir : Foreigners finds job in Malaysia because of lazy locals
Prime Minister Tun Dr Mahathir Mohamad made scathing remarks to the Malay community in particular on the second anniversary of the Parti Pribumi Bersatu Malaysia (BERSATU).
— The Independent

33 years after Dr Mahathir’s first visit to China
Watching the television coverage of Dr Mahathir Mohamad arriving in Beijing last month on his first official visit to China since returning to office brought back many memories of a similar visit 33 years ago.
— FMT

Shafee Admits He Lied….. And Then Tells Another Tall Story!
Have you heard the one about the prime minister and the one billion dollar donation from an Arab Royal (no strings attached)?
— Sarawak Report

DRB-Hicom not in troubled waters, 41 employees were given VSS
DRB-HICOM Bhd has completed a voluntary separation scheme (VSS) to all staff at the headquarters in July 2018.
— New Straits Times

Malaysia state government apologises for public euthanasia of 8 stray dogs
Operations to euthanise stray dogs in the state have been halted indefinitely after the authorities were criticised by several quarters for publicly putting to sleep eight canines caught in a residential area.
— AsiaOne

3 killed, 14 injured in Malaysia highway crash involving Singapore-bound bus
Three people were killed and 14 others injured after a coach bus operated by Singapore’s Grassland Express & Tours lost control and crashed into a hauler truck on a Malaysian highway early on Sunday (Sept 9).
— The Stratis Times

FOOD FIGHT, LAH: WHO WILL EAT THEIR WORDS IN SINGAPORE-MALAYSIA HAWKER BATTLE?
It is past 6pm in a suburb just outside Kuala Lumpur and an outdoor night hawker market – that staple of Malaysian daily life – is slowly coming to life.
— South China Morning Post