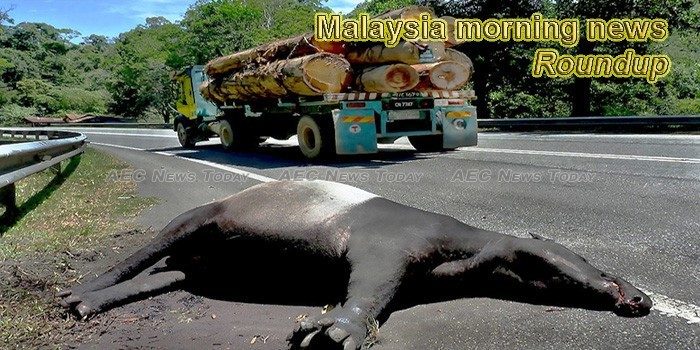 Malaysia Ex-PM’s Wife Rosmah Arrested, To Be Charged With Money Laundering
Rosmah Mansor, wife of Malaysia’s former prime minister Najib Razak, has been detained on October 3 by the Malaysian Anti-Corruption Commission (MACC). According to a press statement, she was arrested at 3.20pm while giving her statement at the agency’s headquarters in Putrajaya. Her arrest had been expected after earlier interrogations since last week.
— Investvine

Budget 2019 – no new taxes, please
For Budget 2019, which will be tabled next month, UOB Research opined that it will be more productive for the government to trim unnecessary expenditure as opposed to introducing new taxes, which are deemed unpopular and likely to raise the cost of doing business at this juncture.
— The Sun Daily

Malaysia ramps up scrap plastic restrictions
Scrap plastic shipments to Malaysia will be subject to new restrictions in the coming weeks, as the country follows through on vows to get a handle on skyrocketing imports.
— Resource Recycling

Give SME vendors 30pc share of govt procurement – SAMENTA
The Small and Medium Enterprises Association Malaysia (SAMENTA) wants the government to set a target of having 30 per cent of all procurement by government departments as well as government and government-linked agencies come from small and medium enterprise (SME) vendors.
— New Straits Times

What Malaysia needs to do to be an Asian Tiger again
IF Malaysia wants to roar again as an “Asian Tiger”, the country would need enhanced technology, a strong workforce and critical technical skills.
— The Malaysian Insight

What Does Mahathir’s Return Mean for Malaysia’s Foreign Policy?
While his views may be well-known, how they will translate into the conduct of foreign policy in a ‘New Malaysia’ is less clear.
— The Diplomat

60,000 workers can now go to Malaysia
Some 60,000 Bangladeshis, whose travel to Malaysia became uncertain after the country suspended the online recruitment system on September 1, have been cleared for migration to the Southeast Asian country.
— The Daily Time

13 reasons to retire in Malaysia
Not every country welcomes foreign retirees. Malaysia is one of only a handful that have special schemes aimed at attracting long-term foreign retirees.
— FMT

Foreign inflows to Malaysia stocks lose momentum
Foreign buying of Malaysia’s stocks slowed in the past week as the nation’s benchmark equity index rose and the Malaysian ringgit was little changed.
— The Edge Markets

Closing A Factory In Malaysia Could Be Bad For U.S. Industry And Good For China
U.S. manufacturers of high-tech equipment dodged a crisis last month when rare earths were omitted from the latest list of tariffs on Chinese goods but they might still have a problem because the world’s biggest source of the critical elements outside China is being threatened with closure.
— Forbes

Mark Field in Malaysia to deepen bilateral ties ahead of Brexit
FCO Minister of State for Asia and The Pacific Mark Field is in Malaysia to strengthen links with Malaysia as the UK prepares to leave the European Union.
— Gov.UK