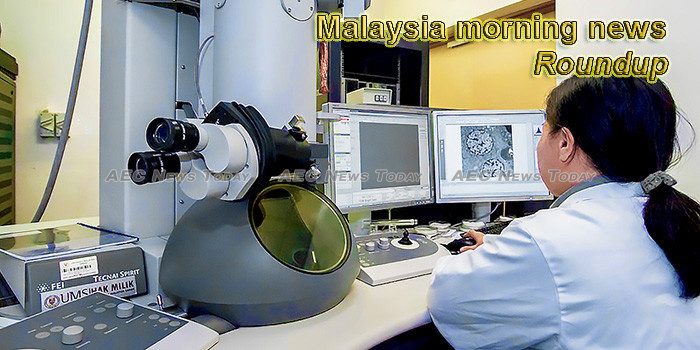 Malaysia allocates $240m for national fiber plan
The Malaysian government has announced a 1 billion ringgit ($239.7 million) initiative to improve the nation’s telecoms connectivity in the market in order to promote growth of its digital economy.
— Telecom Asia

Malaysia court to resume Kim Jong Nam murder trial on Jan. 7
A Malaysian court on Wednesday set Jan. 7 for two Southeast Asian women charged with murdering the North Korean leader’s half brother to begin their defence, as their lawyers complained that some witnesses were unreachable.
— CTV News

MATTA and CLIA set to focus on Malaysia’s emerging cruise market
The Malaysian Association of Tour and Travel Agents (MATTA) and Cruise Lines International Association (CLIA) have developed a collaboration through a Memorandum of Understanding (MoU) for strategic cooperation to drive the emerging cruise tourism in Malaysia.
— Seatrade Cruise News

Study on national railway to ensure full benefits: Dr M
The Malaysian government’s efforts to get the JR Kyushu Railway Company’s cooperation to look into the problems of the national railway is to ensure that services are fully beneficial to the nation and the people, according to Prime Minister Tun Dr Mahathir Mohamad.
— The Sun Daily

Genting Malaysia rebounds as markets resume trading
Genting Malaysia Bhd shares rose as much as 16 sen or 4.43% to RM3.77 so far today on bargain hunting after the stock fell on Monday following news Malaysia’s casino tax will be increased to 35% of gross income.
— The Edge Markets

RHB Bank eyes 30pct increase in cardholders by Q1 2019
RHB Banking Group expects to increase the number of its cardholders by 30 per cent by the first quarter next year, driven by its latest product, the Dual Credit Card.
— New Straits Times

Gadang sets eyes on infrastructure projects in Sabah, Sarawak
Construction and property player Gadang Holdings Bhd, which currently tendering for up to RM2 billion worth of projects, aims to secure a slice of infrastructure projects expected to be rolled out in East Malaysia following the states’ higher allocation on development expenditure next year.
— The Sun Daily

Stop outrageous assumptions about ICERD, says Mujahid
Malaysians have been advised to stop making outrageous assumptions over the government’s intention to ratify the International Convention on Elimination of All Forms of Racial Discrimination (ICERD) which could lead to negative perceptions of racial ties in the country.
— FMT