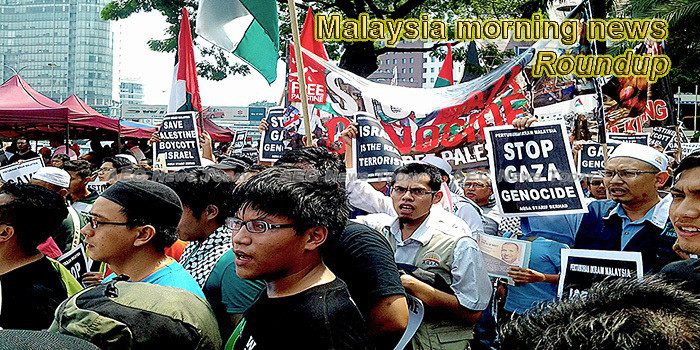 Building houses of worship in Malaysia may require permit in future
The Malaysian government will pass a resolution that would make it compulsory for a permit to be obtained before houses of worship are built.
— Channel NewsAsia

One City: We respect Malaysian law, want ‘appropriate’ resolution to temple issue
One City Development Sdn Bhd today expressed regret and sadness over “events that have unfolded” in the move to relocate the Seafield Sri Maha Mariamman Temple in Subang Jaya.
— FMT

DRB-Hicom posts RM11.42m net loss in Q2
DRB-Hicom Bhd posted a net loss of RM11.42 million in the second quarter ended Sept 30, 2018, from a net profit of RM742.6 million in the previous corresponding quarter mainly due to lower performance of the automotive and services sectors.
— The Sun Daily

7 feuds you should know about in Malaysia
If there is something that gets Malaysians buzzing on social media, it usually involves topics about the local political scene, a must-try dish at a new café or restaurant, a new holiday destination and of course topics which involve elements of controversy.
— Malay Mail

Malaysia to go slow on labour MoU
Malaysia says it will go slow on signing an MoU with other countries on foreign labour until the issue involving illegal foreign workers is resolved.
— The Star Online

Which dish topped fast-food orders in Singapore, Malaysia and Indonesia in 2018?
Various styles of fried chicken are ranked as the No 1 choice in all three Asian nations, with bubble tea the favourite drink, GrabFood delivery service says.
— South China Morning Post

Malaysia delighted with theme chosen by Thailand for Asean chairmanship: Saifuddin
Malaysia is delighted with the theme chosen by Thailand for its Asean chairmanship next year – ‘Advancing Partnership for Sustainability’ – as it is in line with Malaysia’s drive to achieve the United Nations’ Sustainable Development Goals (SDGs) 2030 Agenda.
— The Sun Daily

MyEG incurs net loss of RM97.5m for July-Sept quarter
MY E.G. Services Bhd (MyEG) posted a net loss of RM97.47 million for the three-month period to Sept 30, 2018, against a net profit of RM56.11 million in the preceding quarter.
— New Straits Times