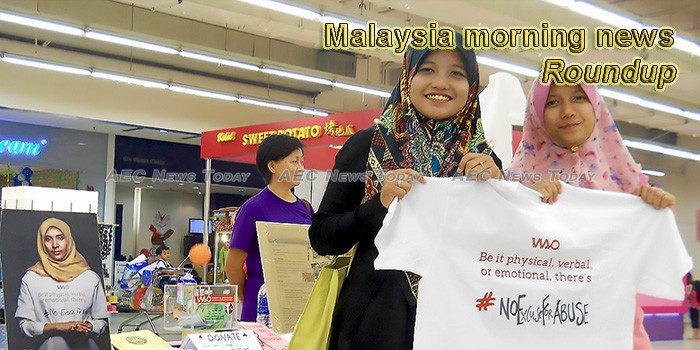 Malaysia moves up in world talent rankings, ahead of Japan and UK
Malaysia has been placed at 22 in the World Talent Ranking for 2018, ahead even of Japan, which the government wants the nation to emulate.
— FMT

Petronas raises Nov crude price factor to US$5 a barrel
Malaysian state oil firm Petronas has set the price factor for Malaysian Crude Oil (MCO) for November at $5.00 per barrel, up $0.65 from the previous month, the company said on Monday
— The Star Online

Understanding Malaysia’s 3 categories of affordable homes
Is the current issue of Malaysians needing a home but being unable to afford one, an issue of demand or supply?
— FMT

Southeast Asia internet economy, including Malaysia, seen at $240 bln by 2025
Southeast Asia’s internet economy is expected to exceed $240 billion by 2025, a joint study by Google and Temasek Holdings showed, a fifth more than previously estimated, as more consumers use their smartphones to go online.
— The Star Online

Malaysia’s Mahathir may defy the global trend of misrule by elite
Political revolts around the world have targeted what are widely seen as corrupt and unaccountable political and business elites — elites that pursue their own interests globally at the expense of ordinary citizens and regulatory regimes in nation-states.
— The Japan News

Malaysia’s leaders backtrack on ratifying UN human rights treaty
Malaysian government leaders are backpedalling on a plan to ratify a United Nations human rights treaty after facing resistance from Malay and Muslim organisations, and with the main opposition parties Umno and Parti Islam SeMalaysia (PAS) united against the issue.
— The Straits Times

Chinese signboards were a state government decision, says FT minister
Federal Territories Minister Khalid Abdul Samad today said the decision to use road signs written in Chinese had been made by the Selangor state government, following the sultan’s decree that such signboards in Shah Alam be removed and replaced with signboards in Malay.
— FMT

Malaysia moving too slowly on education for migrant kids, says Unesco report
Malaysia is not progressing quickly enough in making education more inclusive for children of migrants and refugees, according to the 2019 Global Education Monitoring (GEM) report by Unesco, published today in conjunction with International Children’s Day.
— FMT

Telekom Malaysia’s trouble – Bazlan backlash
Telekom Malaysia Bhd (TM) share price continued to slide after the abrupt departure of its acting group CEO, Datuk Bazlan Osman, on Friday and the company coming under pressure from the regulator for the shortcomings in its services.
— The Star Online

KLIA incident: Vigneswaran refutes allegations of abuse of position, privileges
Dewan Negara president Tan Sri S. A Vigneswaran is insisting that he did not misuse his position and privileges in the incident at the Kuala Lumpur International Airport (KLIA) on Nov 14.
— The Borneo Post

Malaysia and Singapore Vow to Strengthen Ties Amid Water Agreement Dispute
Malaysia’s Prime Minister, Mahathir Mohamad, vowed to strengthen ties with the nation’s “twin” as he officially called for a review of water sold to the republic at the 33rd ASEAN summit in Singapore.
— The Epoch Times

Rapid project to push PetChem’s output substantially in 2H19
Optimism continues to reign for Petronal Chemicals Group Bhd (Petronas Chemicals) following the release of its third quarter financial year 2018 (3QFY18) results amidst a spate of corporate updates including its facilities in Pengerang to see commercial commencement by early 2019.
— The Borneo Post

Malaysian fraud suspect arrested in Thailand
A 60-year-old Malaysian fugitive, wanted for real estate fraud back home, thought he could evade arrest by escaping to Thailand, but he was wrong.
— The Star Online

PCA to boost Malaysia-EU trade ties
The partnership cooperation agreement (PCA) between Malaysia and the European Union (EU), which will be signed in January next year, is a big step forward to boost more bilateral and trade agreements between the two parties.
— The Borneo Post