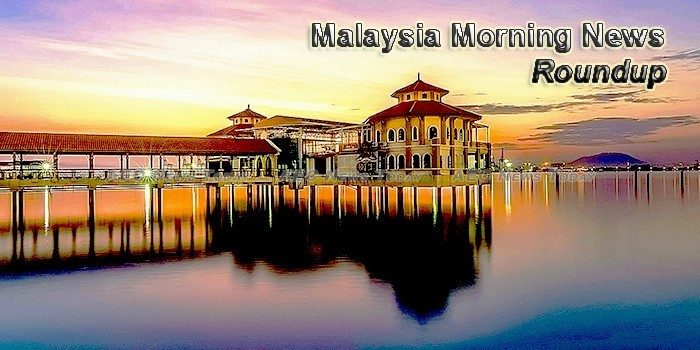 GE14 continues to exert pressure on the ringgit
Investors are holding off on ringgit-based assets in expectation of a closely contested 14th General Election (GE14), causing the local note to lose ground against the strengthening greenback.
— The Malaysian Reserve

Malaysia’s March exports likely up, imports down 3%
Malaysia’s exports for the month of March will see a somewhat tepid recovery from the contraction seen in the previous month but indicators show that shipments may slow in the coming months.
— The Star Online

Fuel prices unchanged from tomorrow to May 9
The retail fuel prices will remain unchanged for the first week of May.
— New Straits Times

New scan of ocean floor hasn’t found any sign of MH370
The new scan of the Indian Ocean floor for Malaysia Airlines Flight 370 has searched nearly 80,000 square kilometers since January without finding any sign of the wreckage. But the company looking for the plane missing for more than four years said it is still determined.
— Chiang Mai Mail

SME Corp wants firms in sector to go cashless
SME Corp Malaysia is targeting for 100,000 SMEs to move into cashless transactions this year, from 7,000 now, through collaborations with industry players and its awareness programmes with SMEs.
— The Sun Daily

AP Explains: 1MDB graft scandal heats up Malaysia politics
Malaysia’s image as a striving, modern nation that upholds the rule of law has been undermined by an epic corruption scandal at state investment fund 1MDB.
— kdhnews

iPrice ranks top e-commerce sites in Malaysia
Lazada Malaysia is the most visited website among desktop users, with an average online traffic of 48.4 million in the first quarter of 2018. This was according to iPrice Group’s Map of E-Commerce list, which noted that Lazada’s average monthly traffic jumped 25.3% from 38.6 million.
— Marketing

Foreign buyers on Bursa picking up as GE14 looms closer
Analysts are observing a rise in foreign participation on Bursa Malaysia in its daily trade as Malaysia’s 14th General Election (GE14) looms closer.
— The Borneo Post

KLCI closes down 18pts as Maxis, CIMB and Maybank weigh
Blue chips closed on a weak note on Wednesday ahead of the 14th General Election on May 9 as investors decided to stay on the sidelines.
— The Star Online

Trade between Taiwan and Malaysia to surpass US$19 billion in 2018
TAITRA is preparing to host a Taiwan Excellence showcase in Kuala Lumpur from May 4-6, displaying the newest innovative products for market representatives in Malaysia.
— Taiwan News

Malaysia, Philippines drop 1%; Thailand bounces back in late trade
Malaysian and Philippine shares fell 1% each and snapped three straight sessions of gains, while Thai stocks bounced back in late trade to close more than 0.5% higher.
— The Edge Markets