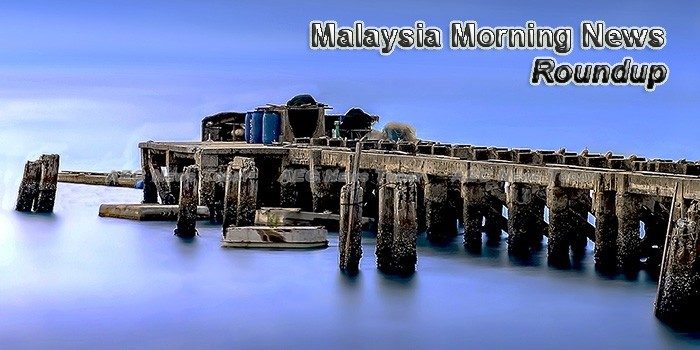 Maybank to raise lending rates by 25bps on Monday
Malayan Banking Bhd will raise its base rate (BR) and base lending rate (BLR) with effect from Monday, in line with Bank Negara Malaysia’s decision to the increase in the Overnight Policy Rate (OPR).
— The Star Online

CIMB to raise lending and FD rates
In response to Bank Negara Malaysia’s (BNM) overnight policy rate (OPR) increase from 3.00 per cent to 3.25 per cent, CIMB Bank Bhd and CIMB Islamic Bank Bhd today announced corresponding increases in its Base Rate and Fixed Deposit Board Rates by 0.25 per cent.
— New Straits Times

FMM calls for minimum wage status quo
The Federation of Malaysian Manufacturers (FMM) appeals to the government to maintain the current minimum wage, following MTUC’s suggestion for a 50 per cent hike to RM1,500.
— New Straits Times

Najib tries to bridge divide with East Malaysia ahead of polls
Construction of an 11km bridge will begin in 2020 – when the rest of Malaysia is slated to achieve “developed” status – linking one of the country’s poorest states with a financial district that is one of the country’s richest.
— The Straits Times