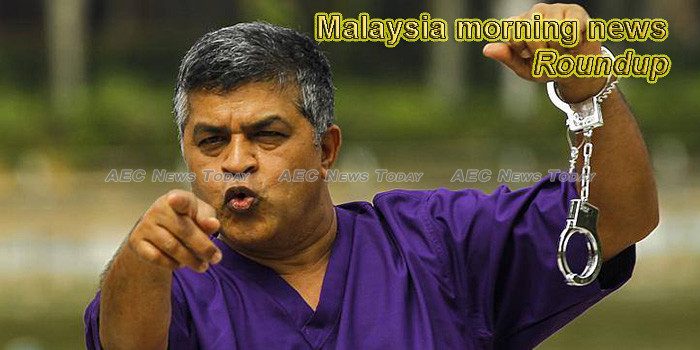 Malaysia is the biggest gainer in corporate governance ranking
Malaysia ranked fourth out of 12 Asia-Pacific economies in terms of market accountability and transparency, according to the recent 2018 CG Watch Report published by the Asian Corporate Governance Association (ACGA) and CLSA.
— New Straits Times

Malaysia may stop or limit egg exports to maintain local market supply: Minister
Malaysia is looking into limiting or stopping the export of eggs to ensure there is sufficient supply for its domestic market, Domestic Trade and Consumer Affairs Minister Saifuddin Nasution Ismail said on Monday (Dec 10).
— Channel NewsAsia

Malaysia: Over 155 people lost RM 3.1 million in durian investment scam
Recently, somebody misused the love that Malaysians have towards the king of fruits by using it to scam people for their money. The ‘Musang King investment plan’ promised low investments with high returns and managed to con 155 victims out of a total of RM 3.1 million (€650,750) over the past four months.
— Fresh Plaza

Malaysia must achieve use of B20 biodiesel by 2020, says Dr M
Prime Minister Dr Mahathir Mohamad today urged the local palm oil industry to join the ranks of countries already using B20 biodiesel fuel such as Indonesia.
— FMT

When can we get 5G in Malaysia?
You’ve probably heard about 5G a lot in the news lately and you must be wondering, what is 5G all about? Is it just hype or can it unlock new things which are not possible with our current mobile technology?
— Soyacincau

Malaysia’s deal activity falls significantly in 2018
Malaysia has seen a major reduction in corporate deal activity this year with total deals in mergers and acquisitions (M&A), private equity/venture capital (PE/VC) and initial public offerings (IPO) valued at US$12.5 billion compared with the record levels last year with deals worth US$20.3 billion.
— The Star Online

Malaysia Plans $4.8 Billion Rescue of Islamic Pilgrim Fund
Malaysia’s finance ministry has approved a plan to revive the balance sheet of Lembaga Tabung Haji, a state fund tasked with helping Muslims save for a pilgrimage to Mecca.
— Bloomberg

Fear and the manipulation of the Malay mind
Some people claim that the winners in the anti-ICERD rally were the conservative Malay-Muslims, and the losers Pakatan Harapan (PH) and to a lesser extent Umno.
— FMT

Malaysia rises in CG Watch report on corporate governance ranking
Malaysia ranked fourth out of 12 Asia-Pacific economies in terms of market accountability and transparency, according to the 2018 CG Watch report in December.
— The Star Online

Malaysia making mockery of close-knit Asean
The recent incursion by Malaysian vessels into Singapore waters is a timely reminder of how unpredictable and fragile relationships between neighbours really are, despite a seemingly close kinship.
— The Straits Times

MGA champions gender equality in energy sector
Championing equal opportunities and diversity in the energy sector, the Malaysian Gas Association (MGA) in collaboration with Malaysia Women in Energy (MyWiE) organised the Forum on Women in Energy (FoWiE) for the second successive year.
— The Borneo Post

Brunei-Malaysia Military Ties in Focus With Defense Chief Visit
Last week, Malaysia’s new defense chief was in Brunei for a scheduled introductory visit. The interaction put the focus on the Malaysia-Brunei defense relationship and the broader state of bilateral ties more generally.
— The Diplomat

Four new board members at HRDF
The Human Resources Development Fund (HRDF) has today announced four new directors in efforts to put right wrongdoings committed by some members of the previous board.
— New Straits Times

Accountants must be adept to technologies
Government accountants should become adept at technologies, especially automation and artificial intelligence, blockchain, cloud and cybersecurity and data analytics (ABCD), as Malaysia moves into the digital economy and companies steered towards adopting the Industrial Revolution 4.0 (IR 4.0).
— The Borneo Post

SK Magic home appliances debuts in Malaysia
South Korean conglomerate SK Group, which launched its home appliance arm SK Magic in Malaysia four months ago, plans to be present in over half a million homes here within the next four years.
— New Straits Times