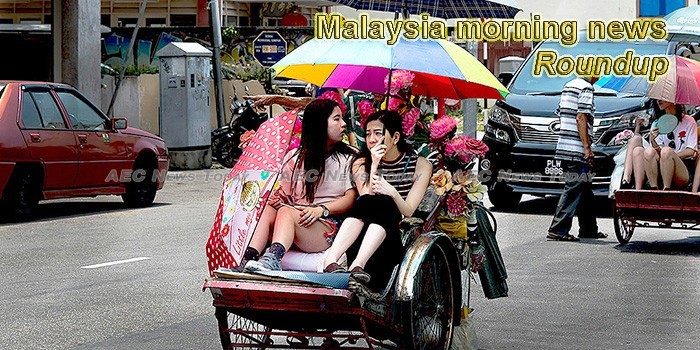 Malaysia, Indonesia Agree On Joint Production Of New ASEAN Car
Indonesia and Malaysia have reached a deal to set up a joint venture to produce the first fully local-made vehicle for domestic use and sale in the Association of Southeast Asian Nations (ASEAN) and pledged to jointly further develop both nations’ automotive sectors.
— Investvine

Less than 50% of Malay voters think Malaysia on the right track
AS Pakatan Harapan clocks in 100 days in Putrajaya, not many Malay voters are impressed with Dr Mahathir Mohamad’s second administration, a survey has found.
— The Malaysian Insight

Why the GST failed
THE argument that the Goods and Services Tax (GST) was a major factor in price increases found receptive ears among Malaysians.
— New Straits Times

Withdraw gracefully from bad trade deal
The new Pakatan Harapan government should amend legislation in line with the needs of the new Malaysia and not at the behest of US lobbyists.
— FMT

Islam is a Malaysian issue
It is time to include a few non-Muslims in Islamic committees and boards to ensure amicable solutions for a united nation.
— FMT

Putrajaya to hold conference to promote Malaysia-China ties
The voyages of Admiral Cheng Ho in pioneering bilateral relations between Malaysia and China will be brought into focus when the 2018 International Cheng Ho Conference is held here on Nov 10.
— FMT

11street undergoes new revolution
11street, one of the leading online marketplaces in Malaysia, is seeing a new revolution that will further enhance the user shopping experience and make significant contributions to the digital economy in Malaysia.
— The Borneo Post

Finance Minister to propose open inquiry into ‘missing’ RM18b for GST refunds
In an intensifying he-said-she-said situation, Finance Minister Lim Guan Eng said he will propose an open inquiry headed by independent professionals into RM18 billion in goods and services tax (GST) refunds owing to businesses, after former prime minister and finance minister Datuk Seri Najib Abdul Razak stated that the money could have been spent by the new government.
— The Sun Daily

Expert: Hard approach still needed to tackle terrorism
Countering terrorism differs from one country to another, but there are times the hard approach is needed, a counter-terrorism expert said.
— FMT

Malaysia’s top forestry official steps down
Often blunt and outspoken toward critics, Datuk Sam Mannan won the ire of timber companies by declaring hundreds of thousands of hectares of rainforest as permanent forest reserves. It is unclear where he will end up.
— Eco-Business

Mahfuz: Let’s help LGBTs return to their ‘original identity’
Mahfuz Omar says help should be offered to lesbians, gays, bisexuals and transgenders (LGBT) to get them to revert to their “original identities” instead of merely trying to get their rights recognised.
— FMT