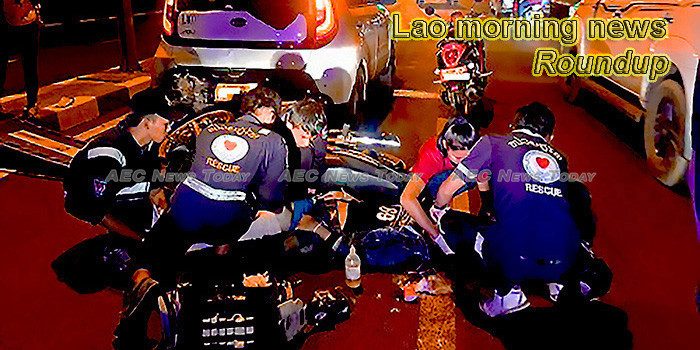 Almost 250 Private Clinics Ordered To Close
The Ministry of Health has ordered the closure of 248 clinics including 120 clinics in Vientiane Capital, 40 in Savannakhet and 16 in Oudomxay.
— KPL

Laos To Buy Fighter Jets, Tanks From Russia
Laos ordered an unknown number of fighter jets and up to 30 army tanks from Russia, with sources in Laos saying the purchase will be made with concessions to run mining and other projects in the country.
— Investvine

The NSC approves the issuance of shares and other important tasks
The meeting was held on December 26, 2018 under the chairmanship of Mr. Somdy Douangdey, Deputy Prime Minister, Minister of Finance, Chairman of the NRA and the appointment of Mr. Chaisakphai Chaiyak, Governor of the Lao PDR to be the Vice President of the NRA and a new nominee.
— Pasaxon

Nation prepares fun aplenty to ring in 2019
Authorities across the country are preparing countdown activities to celebrate the New Year while also promoting tourism and the start of Visit Laos-China Year 2019.
— Vientiane Times

Dams threaten traditional way of life in Mekong Basin
Sak Siam, 69, chief of Chnok Tru, a village in central Cambodia, is worried. The floating village of about 1,700 households is located on a tributary of the Mekong River.
— Nikkei Asian Review (paywall)

Facing the future in Laos and Cambodia
A crowd had gathered on a dock in the village of Nong Khiaw, where I had come with my friend Jeff and our guide, Oun, for a countryside excursion from the splendid city of Luang Prabang in Laos.
— Star Advertiser

MANY SECTIONS VISIT THE SPECIAL DISADVANTAGES OF 790 AND 489
To encourage the brotherhood of the Lao People’s Army to express their gratitude, a spirit of devotion, especially to the brothers.
— Vientiane Mai

The Lao PDR summarizes the activities carried out annually
(SSPP), a legal seminar on the armed forces of the three northern provinces of Oudomxay, Luang Prabang and Xayaboury, officially opened on December 26, under the presidency of Mr. Phuch.
— Pasaxon

Delegates complete the exchange of religious works
The Vietnamese delegation led by Vice Chairman of the Central Committee of the Communist Party of Vietnam (CPV), Nguyen Xuan Thang, Deputy Prime Minister and Minister of Foreign Affairs of Viet Nam, Vu Huyen Tung, Head of the Government Commission for Religious Affairs of Viet Nam, has attended the workshop on exchange of religious activities during the 20th to 23rd November in Ho Chi Minh City.
— Pasaxon