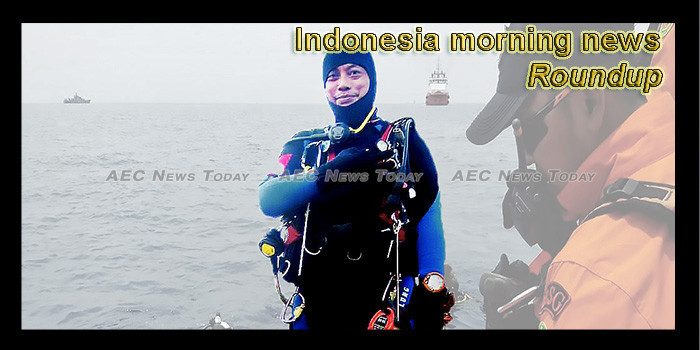 Less than 1,000 psychiatrists for 260 million Indonesians
For its size, Indonesia has a severe shortage of mental health practitioners.
— The Jakarta Post

Families hold mass prayer at sea for victims of Indonesia’s Lion Air crash
Hundreds of grieving relatives prayed Tuesday (Nov 6) at the spot where a Lion Air jet plunged into the sea as revelations over the jet’s malfunctioning air speed indicator raised fresh questions about the cause of the accident.
— Channel News Asia

Mixed reaction greets cancelled plan to hike cigarette tax
The government has canceled its plan to increase the excise tax for tobacco and tobacco products in 2019 and has also postponed its plan to simplify the tax, which has met with mixed responses from industry and consumer groups.
— The Jakarta Post

Indonesian Startup Uses Road Safety to Drive Women’s Empowerment
Iim Fahima Jachja cannot operate a vehicle and relies on a driver to get around the Indonesian capital, Jakarta, but that did not stop her from putting road safety at the heart of her women’s empowerment startup.
— Voice of America

South Sumatra plans restoration of hundreds of hectares of peat land
Peat land restoration would cover around 594,231 hectares in South Sumatra this year to preserve the environment, a government official said.
— Antara News

BPOM seizes sex aids, other items worth Rp 17 billion
The Food and Drug Monitoring Agency (BPOM) had seized unlicensed sex enhancers and other products worth Rp 17.4 billion (US$1.2 million) from two warehouses and a house in Kebon Jeruk, West Jakarta.
— The Jakarta Post

Bekasi to merge 110 schools
The Bekasi administration in West Java plans to merge 110 elementary schools into 50 schools in an attempt to cut costs.
— The Jakarta Post

Indonesia eyes millennial tourists at London trade fair
The Tourism Ministry is eyeing the millennial market at London`s World Travel Market (WTM) by establishing some 100 tourist destinations to serve as photo spots and be showcased on social media platforms, including …
— Antara News

Lack of high-quality startups contributes to Series B crunch, says
Indonesia may be seeing a scarcity of Series B deals, but this phenomenon is hardly down to a shortage of scale-stage investors, according to YC Ng, a partner at Latitude Venture Partners (LVP), the newly-formed venture capital arm of Indonesian conglomerate Sinar Mas.
— Dealstreet Asia (paywall)

Indonesia: Crackdowns on LGBTI people hit alarming level
LGBTI communities in Indonesia are facing increasing crackdowns both from the police and the municipal police (Satpol PP) with at least four series of arrests and public humiliations having taken place across the country in the past month, Amnesty International says.
— Amnesty International

Gov`t Declines to Compensate False Arrest Victims
The Jakarta Legal Aid Institute (LBH Jakarta) accuses the government of failing to compensate two street performers in South Jakarta who fell victim to a case of false arrest by the police.
— Tempo.co

Jokowi Expects MRT Jakarta Ticket Price Set at Rp8,000
President Joko Widodo or Jokowi mentioned the ticket price that will be charged to the public when the capital`s Mass Rapid Transit or MRT Jakarta operated.
— Tempo.co

Jakarta and three other provinces receive information transparency award
The Jakarta administration has received an award from the Central Information Commission (KIP) for its transparency in disseminating information to the public, together with Central Java, West Java and West Kalimantan.
— The Jakarta Post

Indonesia prioritizes health in national development
Health development in Indonesia is the most important pillar of national security, according to Coordinating Minister for Human Development and Culture Puan Maharani.
— Antara News

Why Grab Doesn’t Have a Handle on Indonesia
With a fresh $2 billion war chest, Singapore-based GrabTaxi Holdings Pte is doubling down on its expansion into Indonesia. Meanwhile, Go-Jek Indonesia PT is tiptoeing into its main competitor’s home turf, and making a foray into Vietnam’s buzzing cities.
— Bloomberg

‘They terrorized me every day’: Fintech debtors tell of abuse
Forty-year-old L, a Central Jakarta resident, wiped the tears that were streaming down her face as she recalled her experience being intimidated by an app-based lending firm.
— The Jakarta Post

Police Arrest 10 Women Suspected of “Being Lesbians”
Police in Padang, West Sumatra arrested the 10 women after someone reported them for being LGBTI. The person saw a photo of one of the women kissing and hugging another woman in a Facebook photo.
— Indonesia Expat